A Recipe for All You Bacon Lovers: The Bacon Wrapped Baked Potato 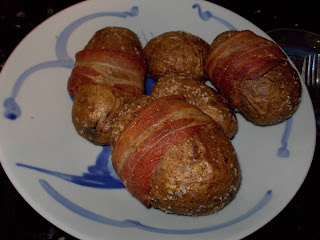 I've been trying various potato recipes that pop into my head lately and have found a new family favorite.  This one is on the menu for dinner tonight, alongside my five bean chili.

Now I should begin by saying that I've never been a huge baked potato fan.  But this recipe has me craving potatoes (and bacon).  And that's why I wanted to share it with you!

1 potato per person
Mix equal parts garlic powder, onion powder and kosher salt in a bowl (I'd start with about a tsp of each seasoning per potato)
1 tsp olive oil (for each potato)
Bacon
Optional (cheddar cheese, sour cream, sliced green onions) 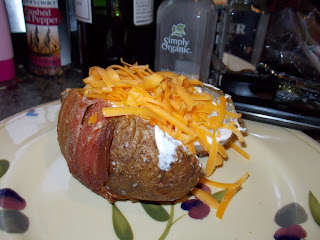 Preheat your the oven to 350 degrees.  Now's also the time to put a cookie sheet on the counter so that you don't have to go looking for one when your hands are covered with olive oil!

Bake at 350 degrees for 45 minutes or until the potato is done.  Slice each potato open and add your favorite toppings (I listed mine above).

I'm excited to try this with additional pieces of bacon so the entire potato is wrapped up in a layer of bacon!  Last time I just used one to see how it would cook, but now that I've tried it I definitely want to try on that's wrapped in several pieces.
Posted by Cammie Diane at 2:54 PM