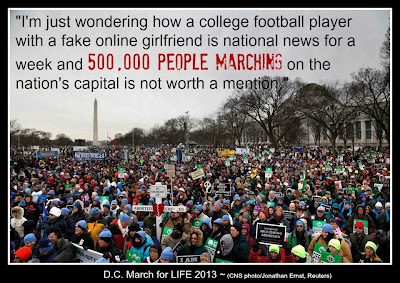 Most mornings when I'm puttering around making breakfast in the kitchen, I bring up the Today Show page and watch their latest and most popular stories on the computer while I'm working.  This morning I found it interesting that one of there top stories was the "thousands" of people that gathered for the gun control march in D.C. yesterday.  The story today said "thousands" and the story yesterday said that "as many as five thousand people are expected."

Okay...I thought (I bet you know where I'm going with this).

Surely they have a story here on the March for Life on Friday.  I'm certain that they didn't altogether miss the 650,000 people that were stretched out over five blocks in D.C. just a couple of days earlier.  After all, if they're going to do two featured stories about five thousand people gathering in D.C., surely a story about over a half million marching to end abortion would have made it's way onto the site.

I clicked around and found a story about a couple covering their floor with pennies (very cool looking, but maybe not quite as newsworthy as the gathering?), and another story about a rare penguin in South America, but nothing on the March.

But surely it was there, right?  I used the search feature and put in March for Life.  Apparently a picture made it into NBC's photo blog for the day (Wow!  What coverage!).  I decided to try searching "abortion."  A few more stories came up.

Wait, so 650,000 people marching gets a single mention in an NBC blog post, but a man (described as a "known anti-abortion heckler" climbing a tree with a sign in a "brown Carhartt-style jacket" gets it's own national news story?  NBC goes on to say that the crowd sang together:  "Na Na Hey Hey Kiss Him Goodbye" as the police carted him off.

Really?  That gets a full article but not blocks of people peaceably speaking out over every child's right to his or her own life is hardly a blip on the network site?

Good job main street media.  It's hard to ignore something this huge so completely, but you did an awesome job.  I didn't see a single story all weekend long.

Don't worry though... we're not going away.  Our numbers are significant and growing, since we aren't killing our children off one by one by one... and because truth doesn't just go away, even when you ignore it.  And we're raising our children to know the truth, as one of the most popular books in our house at the moment says so well:  "A life is a life no matter how small!"

Sadie, who at the ripe old age of four and a half misses nothing, asked me on the day of the inauguration if we couldn't please tell the president that babies are babies when they're in their mommy's tummies so that he could help protect them...  "We need to tell him..." she insisted passionately...  650,000 people did last Friday.  Unfortunately it seems that he's hardened his heart on this issue and while he speaks eloquently about saving our children from guns, he doesn't seem to appreciate the sad irony of fighting for some of our children while advocating that others should be allowed to be killed throughout the first nine months of their lives.
Posted by Cammie Diane at 8:58 AM