Mae is all about Twinkle, Twinkle Little Star right now and getting the hand movements absolutely perfect.  My fingers have to have just the right amount of twinkle, my palms need to be flat (not opening and closing "stars") and there's a great deal of anticipation for the words "up above the world so high, like a diamond in the sky" which is the most oft repeated phrase that I hear her say as she walks around the house making a little diamond shape with her fingers.  Oh and my diamond better not get lazy and start to look like a triangle because that's just wrong.  It's a diamond.  Even at 6 a.m.  Or 4 a.m.  Or anytime, day or night.

Yes, in our house right now, twinkle, twinkle little star is all the rage.

Still... to hear here say that many words at one time makes it totally, totally worth it. 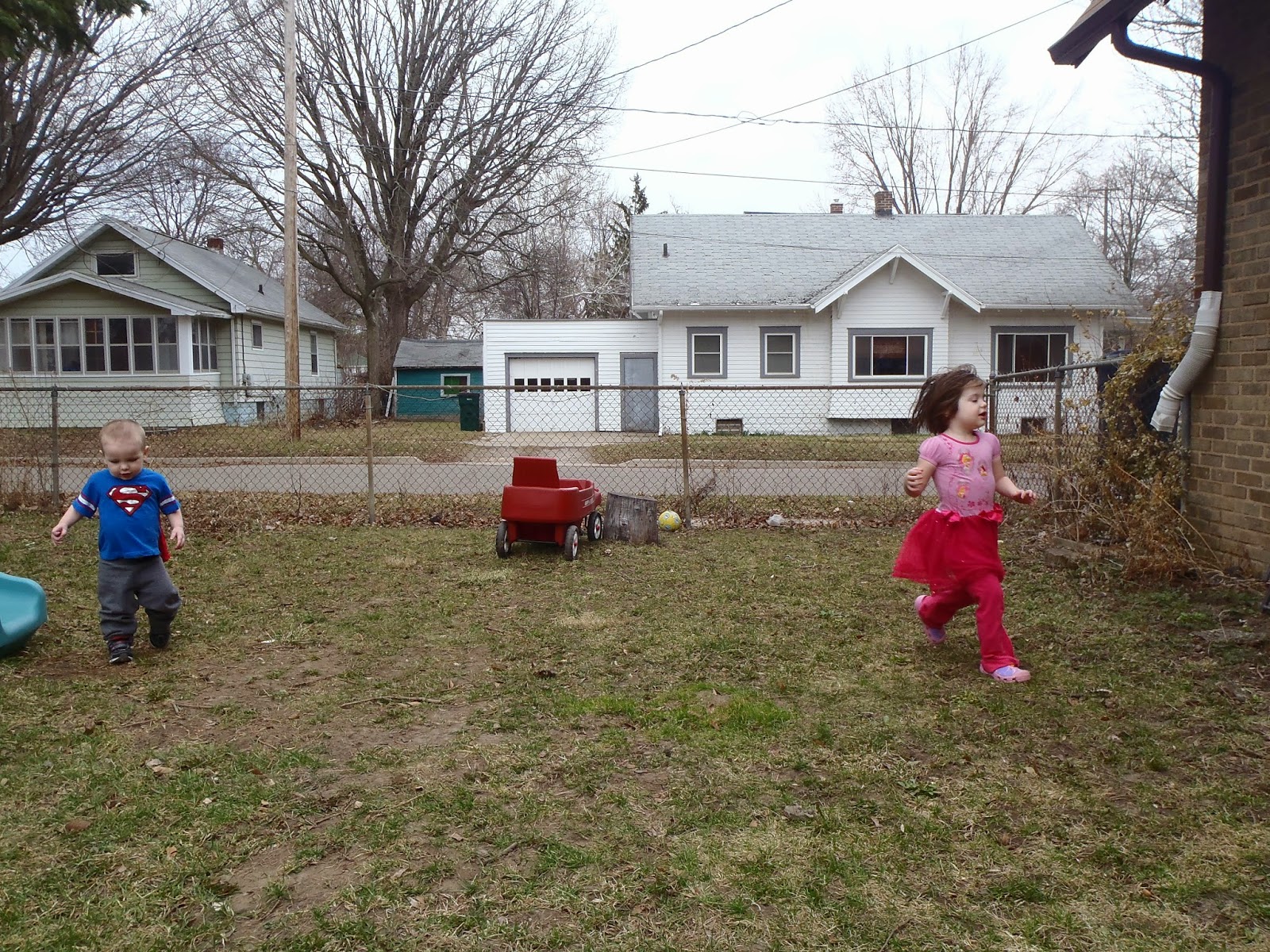 Right now we're gearing up for the start of first grade.  For the last few weeks I kept thinking that I have to write a post on finishing up kindergarten, which went from June until the end of March (because a certain someone was "five and ready to start school" in June), but I still haven't gotten around to it.

We used the book selections and ideas in the Well Trained Mind for Kindergarten and we're continuing on to use it for first grade.  And I'm probably just slightly more excited than Sadie (who is asking almost daily why we haven't started school yet, after all, her sister has school 6 days a week), because I've gone through the books and I can't wait to start the history unit studies and projects that are laid out (we'll be trying to mummify a chicken in the first month!).

I've been busily making a little schedule to figure out how we're going to fit everything into our day and I'm just about ready.  I think we're going to start up the week after Holy Week!  The start of the Easter season seems like a good time to start fresh and throw ourselves into a new school year! 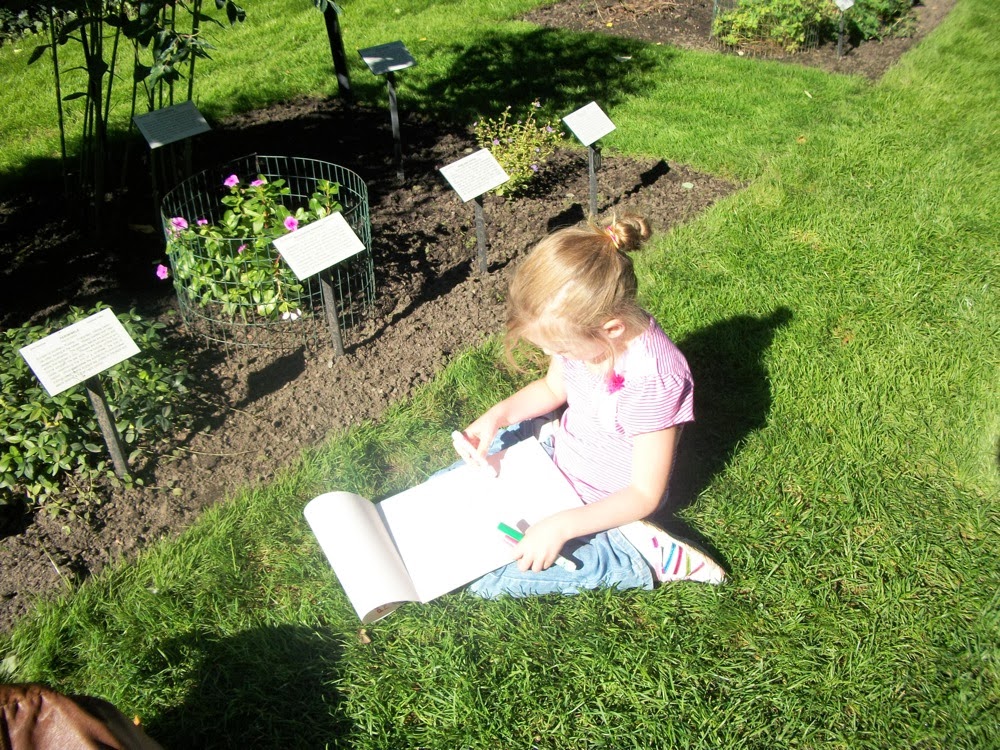 One of the reasons I'm starting now is because the new baby is coming along in October and I want to add in plenty of room for breaks here and there.  I'm thinking of doing six weeks on and one week off to start out with, and planning out larger breaks around when the baby is born, birthdays, Thanksgiving, Christmas and New Years, and any other holidays that we decide to put a little bit of extra time into celebrating.

I'm not sure how those weeks off will actually work, since in reality, weeks off (like what we're in right now) still turn into "Why aren't we doing school?  Didn't you get it ready for me? Can we start school tomorrow?"  Maybe if I sell it as "oh look, fun field trips!" it will help.

And part of me wonders if we'll actually end up taking any extra time off (beyond hospital time) when the baby arrives, because last time, when Patch arrived he was just sort of thrown into the mix. I was on my own by the time he was four days old, Paul was at school with finals approaching for the term and so he was pretty much in his moby wrap during the day for the first few months, and life just sort of went on as it had before. 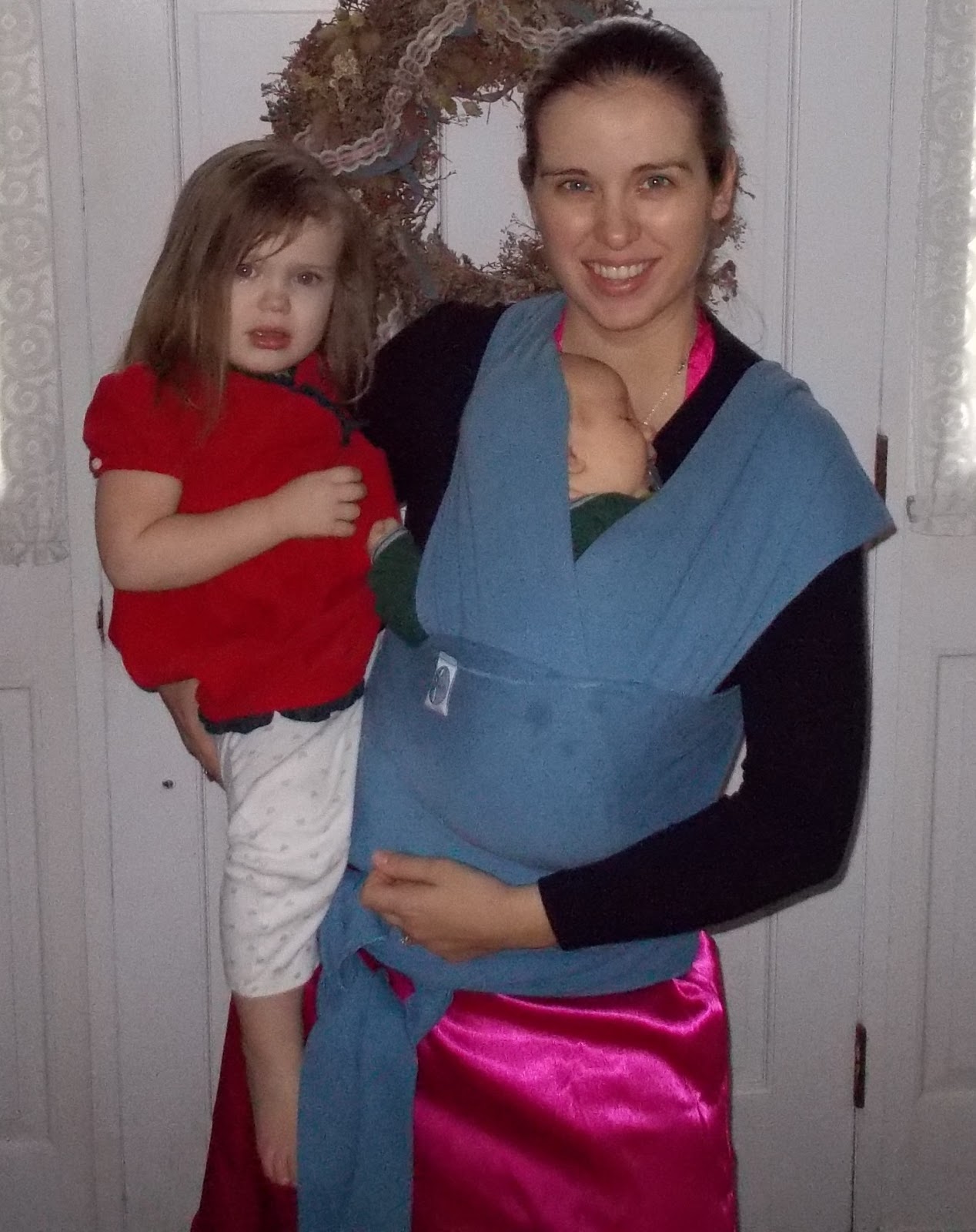 Kitty Fish seems to be doing his job.  I haven't seen a mouse in about a month.  They've stopped racing across my counter tops and running by my feet.  One does occasionally get brought up to the bedroom at night to be shown off, and Kitty accepted a trade of a treat for the removal of his mouse, along with lots of praise for what a good hunter he is (Sadie was gushing about it and giving him treats for days).

And since Kitty has figured out a way to get into the kitchen cabinets (aka the mouse super highway) things have really gotten quiet around here. 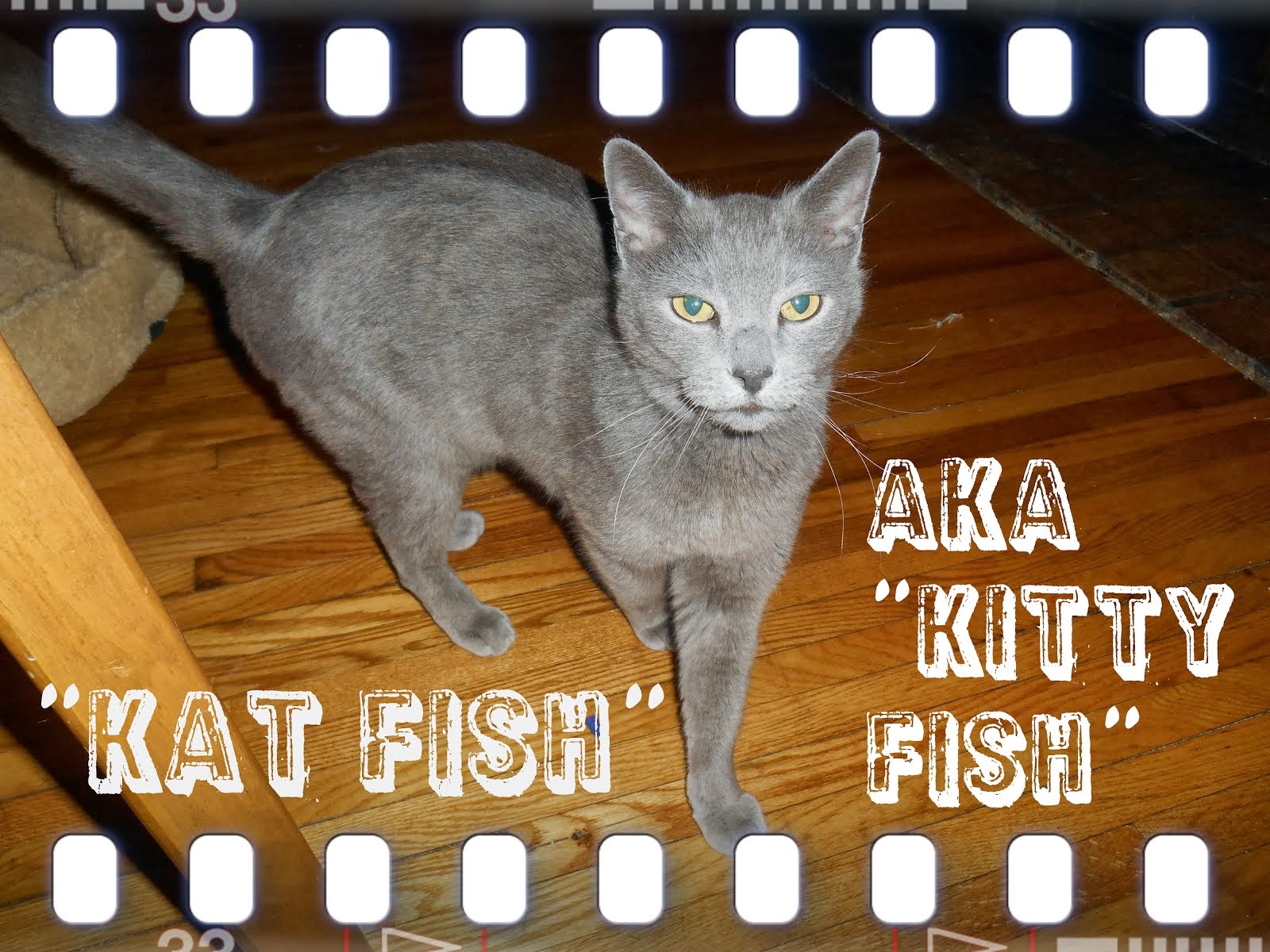 Today is Mae's OT evaluation!  I can hardly wait to meet her new therapist, who we've been hearing lots of good things about!  She's supposed to be good with sensory stuff and that's really what I'm excited about because our little sensory seeker could definitely use some extra sensory help.

So we don't have this: 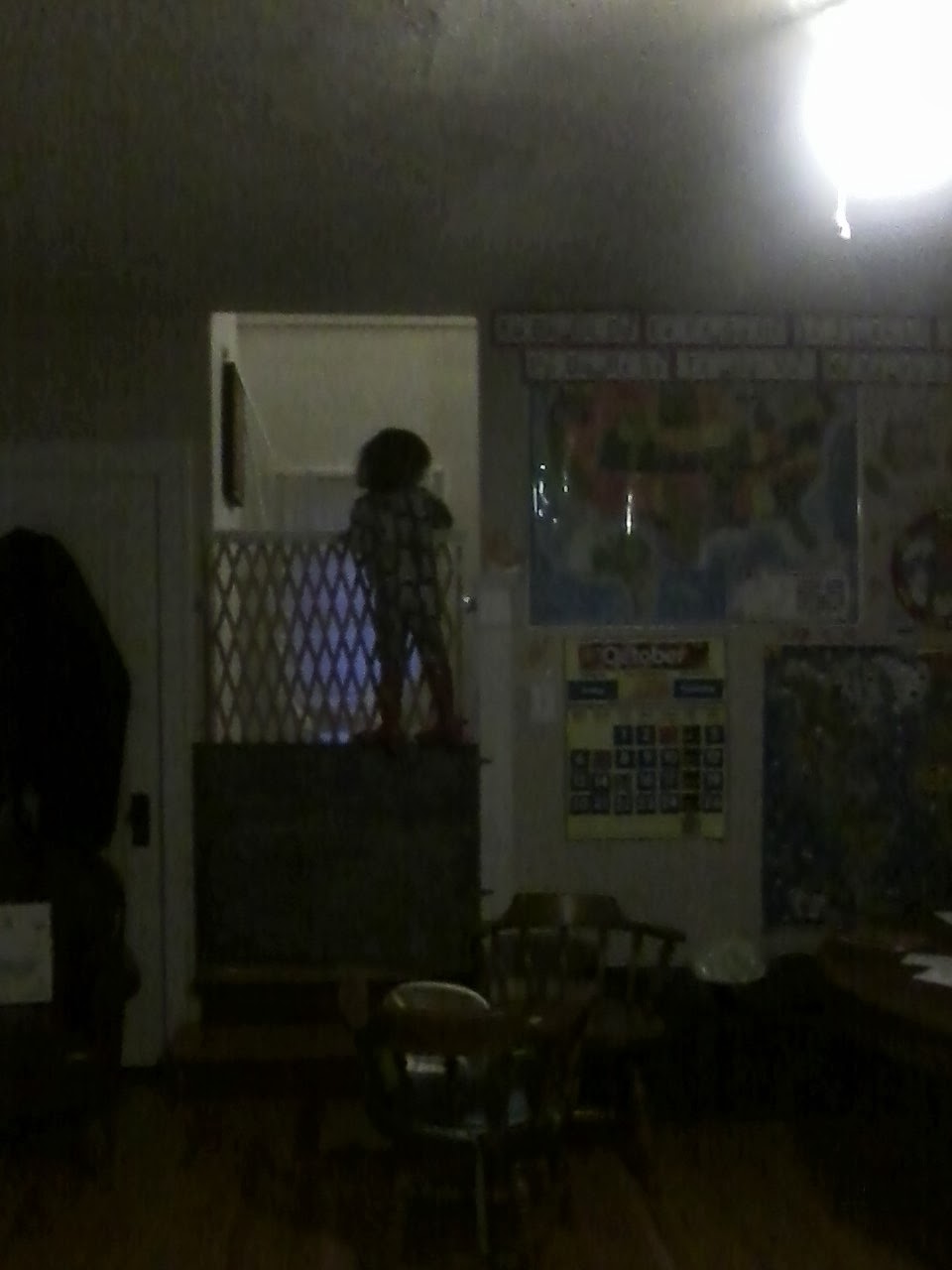 And hopefully so no one ever tries to squeeze down a heating vent again either...

Patrick loves his super man cape.  He was a little bit jealous of his sisters and all of their dress up clothes and was constantly trying to wrap various articles of clothing around his shoulders... but a cape?  A cape does the trick! 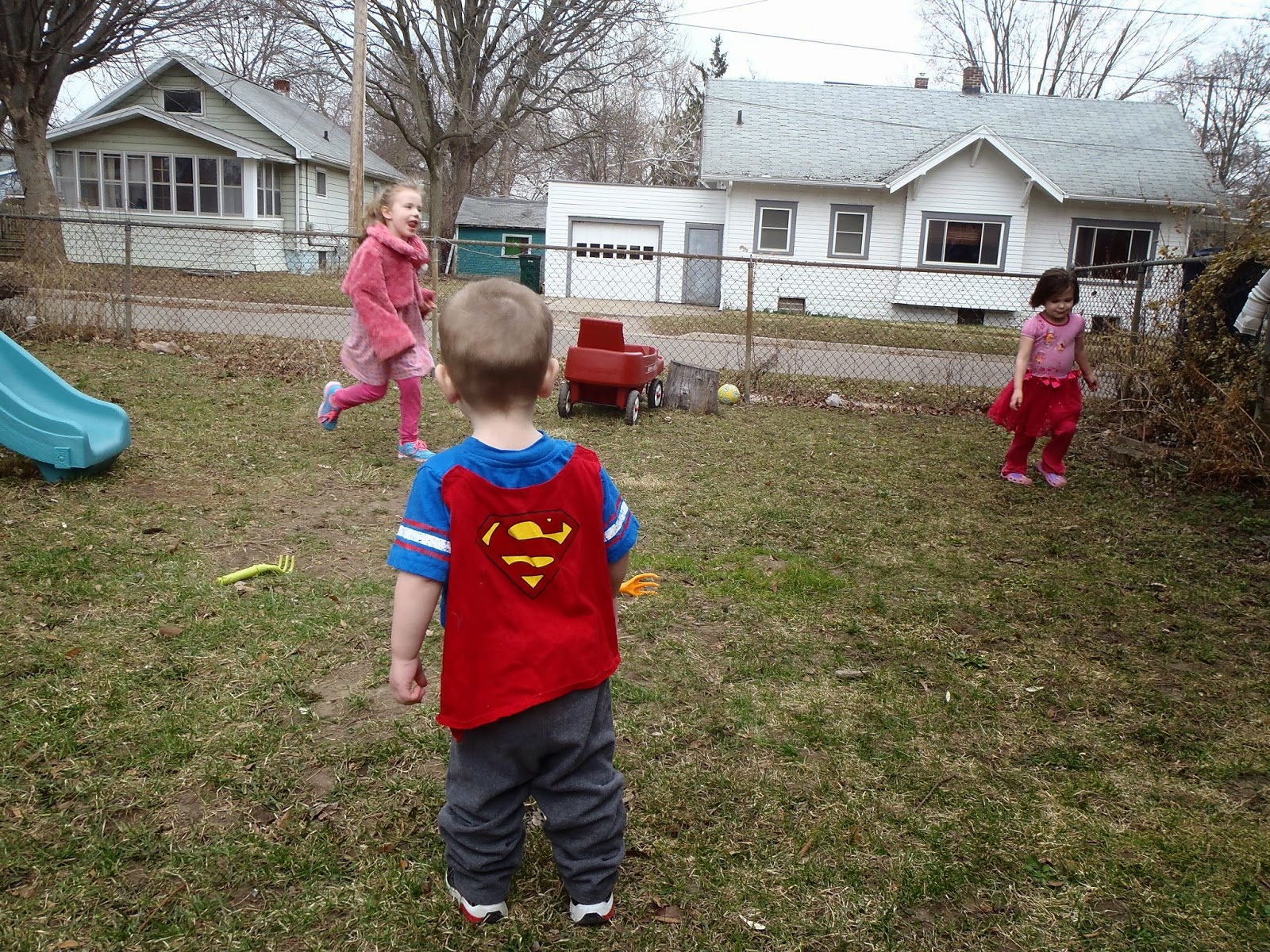 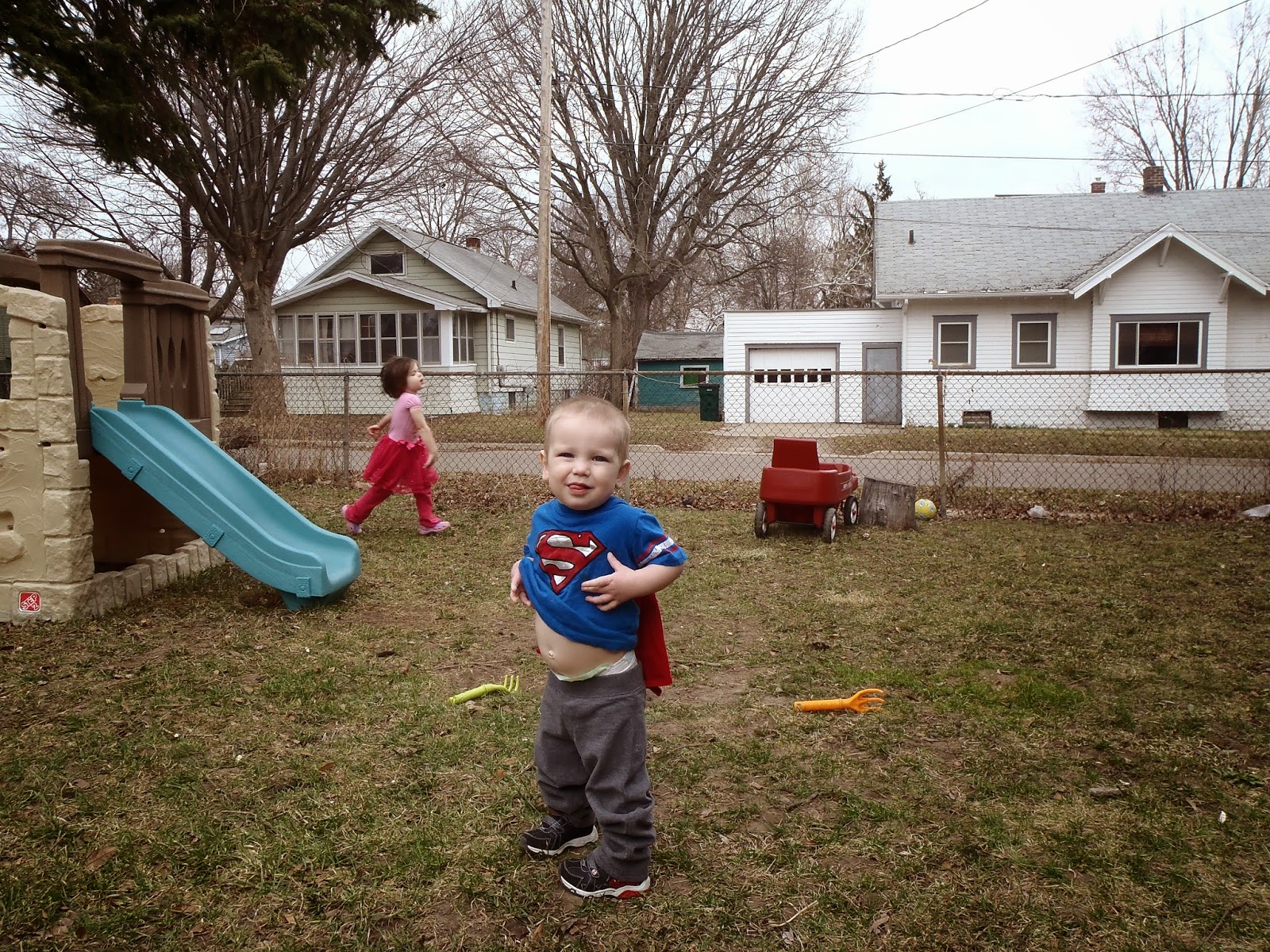 Also, he thinks his belly button is pretty cool...

And one last picture before I go rescue Daddy from the babies who sound as if they're attempting to seize control of the house:

Have a great weekend!


For more Quick Takes, visit Conversion Diary!
Posted by Cammie Diane at 8:13 AM