It's the Small Things... A Story of a "Slumber Party"

All day today Sadie had one thing on her mind.  Bed time.  She couldn't wait for it.  From the moment she got up she could hardly speak of anything else.

Oh there were a few detours for Good Friday.  She knows what today is and each conversation about today was always followed by the word "and what does that mean the day after tomorrow is?", spoken in an excited tone.

As we packed in all the errands that I was finally getting to get done this afternoon while having a car and Paul around to help with the kids before the insanity of finals begins next week, she kept talking about her plan.  "How many hours until bedtime?" she asked.  "Four hours?  That's not too long.  It's a secret.  Maggie and I are having a party."

"It's a secret." Paul asked with a smile.

"It's a surprise."  Sadie replied, as he tried not to laugh.  "And we're going to get dresses out of the closet.  But you don't know what they look like.  Because it's going to be a secret for me and Maggie."

By that point Paul was laughing and joking that she obviously got her surprise keeping abilities from me. 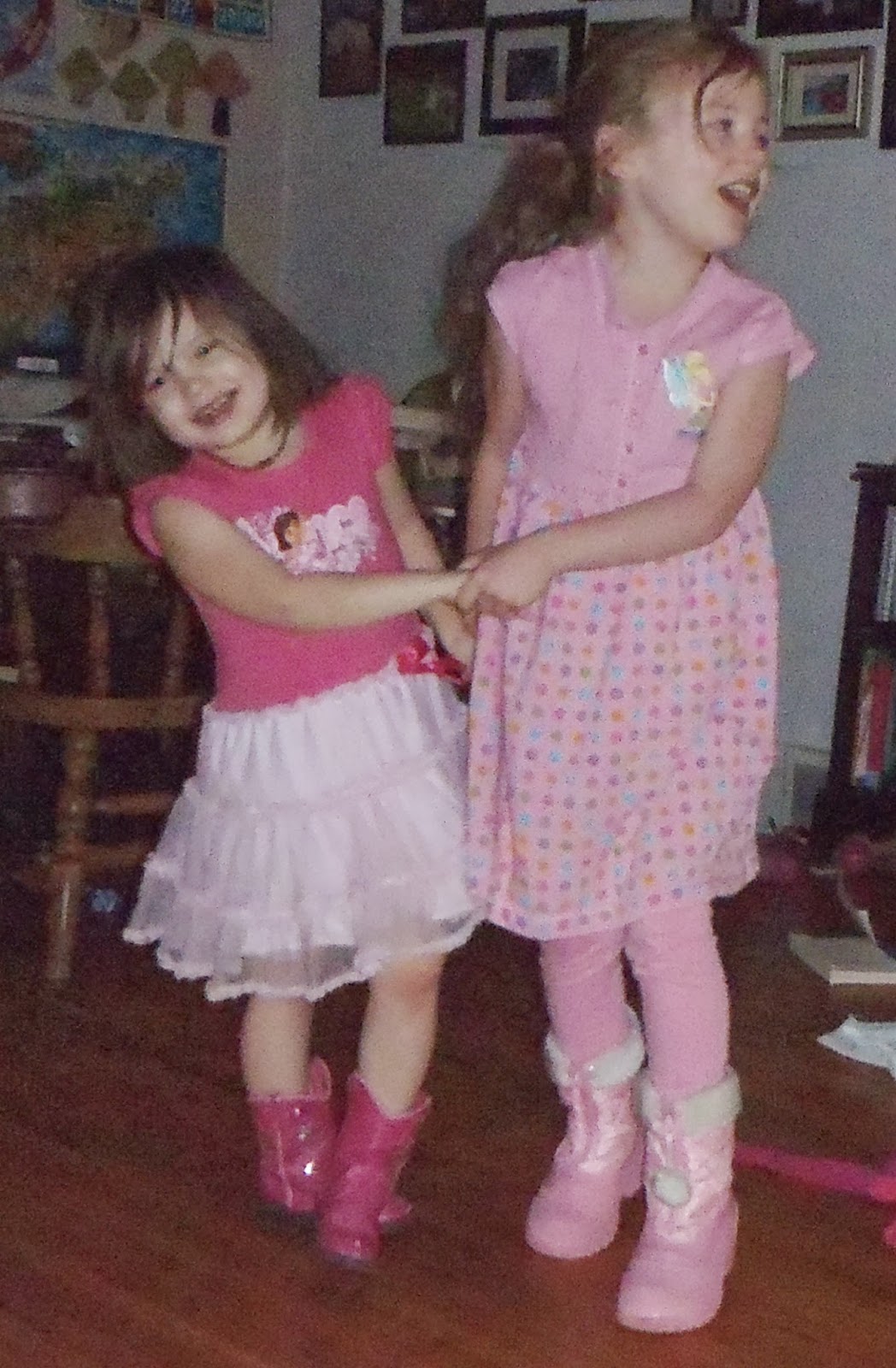 "And there's a dress, and it's going to be pink and brown.  There are fairy dresses in there.  I can't remember what color Maggie's is."

"I hope you girls don't get too wild."  I told her over and over again throughout the day with a laugh, knowing they were going to.

"Maggie will probably get wild.  Wearing pink makes her wild."  Sadie would reply.

"Oh, is that what it is?  Wearing pink?"  I'd say, laughing.  And blue, and red, and yellow, and green and purple, apparently.

This conversation went on all day long.  Sadie brought it up over and over again.  She could hardly wait until bedtime.

Finally it was time for bedtime.  I picked up Maggie's sleeper and she saw me and ran over excitedly.  Sadie had already put on a princess nightgown and was galloping around the room talking about how much fun it would be.  I was surprised Mae came over so quickly, she loves bedtime, but she's not usually a fan of changing her clothes.  She slipped into the pink sleeper with white polka dots and then quickly looked around the room.

Spying what she was searching for she ran over and picked up a pink princess dress with a tulle skirt and brought it to me and then stood while I put it on over her sleeper.

Mae pretty much never sleeps in a dress.  She's not a huge fan of change.  She's also not a fan of changing her clothing.  And here she was handing me a pink dress and excitedly putting it on after hearing her sister talk all day about how they were going to have a party wearing pink dresses.

A few minutes later Maggie and Sadie were having their "party" which involved jumping on their beds together in their pink dresses.  Twenty minutes later I peeked in when I heard Sadie say "no Maggie!" and saw that to her big sister's dismay, Mae was fast asleep wrapped in blankets on the floor.

The party had ended.

I'm still pretty excited though.  Maggie heard her sister talking about having a "sister party" all day long and how they would wear pink dresses and Maggie decided to change her regular routine and excitedly went to the "party."

I have a feeling that there's quite a few more slumber parties in our immediate future.
Posted by Cammie Diane at 8:01 PM