7 Quick Takes Friday: Where All of Patch's Dreams Come True

Yesterday was an "offer it up" day and while I did manage some sewing, my brain just wasn't thinking enough to actually post on the blog.  The culprit?  A bad, bad migraine.

It could have been worse.  My face and hands didn't go numb this time and I wasn't slurring my words... but pain wise it was definitely in the "bad, bad" category.

The only part about being pregnant (or nursing) that is consistently really difficult is the migraines.  All the prescriptions that I used to take, six years ago (the last time I wasn't doing one or the other) worked really well.  But none of them are approved for pregnancy or nursing so... I'm left with...  Benadryl.

The problem, however, is that I can't really take a full dose and then make it through a day with the kids by myself.  Or finish my orders for the day, or really get anything done... because once I take it I'm pretty much asleep.

So I knuckled through saying things like "can we please use indoor voices" and "no Patch I don't think you need to be sitting on top of Mommy right now" and when I had to be up in the kitchen because little people still needed to eat, wandering around the house checking labels for aspartame certain it must have been something that had weaseled its way into my kitchen (it's my #1 migraine trigger and causes migraines that are more intense than any of my other triggers).

Today's better though and I'm just hoping it stays away when the medicine wears off, because I have work to do!

In between orders I've been working on coming up with a new pattern for infinity scarf/headcoverings.  I've got the double loop scarf pattern perfected and now I can't wait until I have a moment to try it out on lace! 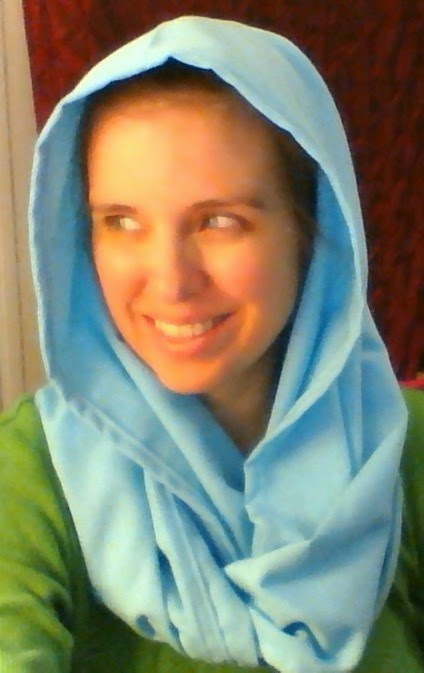 Patrick's big day has finally arrived.  He got the one thing that he's been wanting for... months.  It just so happened that I got a gift card to Target at my last OB appointment, for taking a ten minute survey on pregnancy for a study at the local university, and I knew just what I was going to use it for.  To make all of Patrick's little baby leash dreams come true.

You see, each time Patrick gets into his car seat he pretty much loses it and starts screaming until someone hands him Maggie's "monkey leash" and then he calms down and cuddles it and dreams of the day when he'll someday be big enough to have one of his own.

So I ran into Target last week and discovered that they had one pink bunny leash and one blue owl leash, and a few minutes later I was headed back to the car with the owl.

I decided to let him give it a try on our walk out to the yard, since when we reach the gate I have to let go of either Mae or Patch's hand to open it, and whoever I let go of invariably bolts.  Patrick was thrilled.  He wore it on our short walk and then kept it on during the entire play time outside before proudly wearing it back into the house. 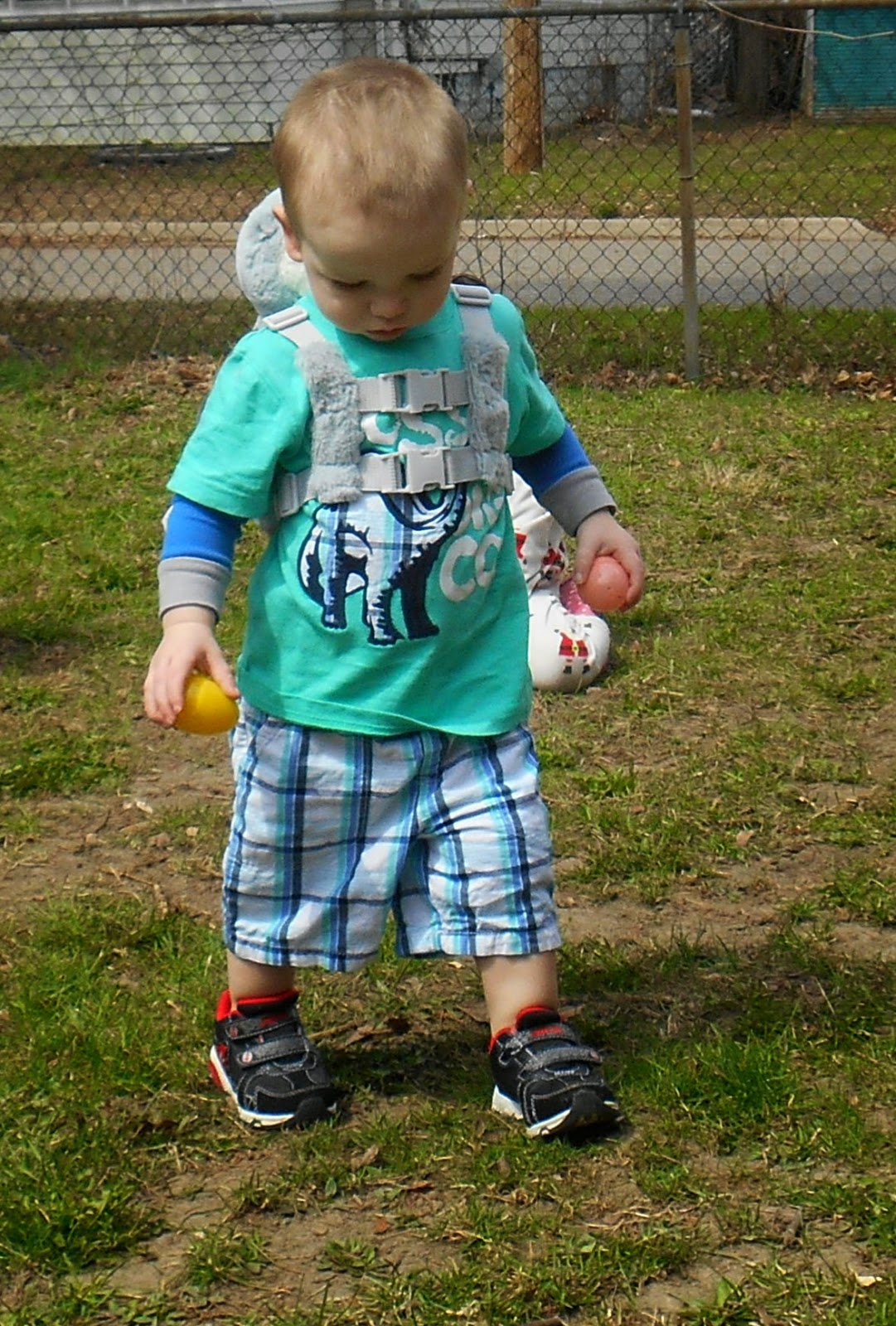 Dare I imagine the comments I'll get if I take both of them out wearing their harnesses?  I imagine the baby bump will even up the chances of hearing something incredible by a few points.

Here he's trying to express just how disappointed he is that all of the eggs outside that he's found since Easter are empty (probably because a certain three year old was discarding eggs after the ate the candy out of them and I didn't catch them all!). 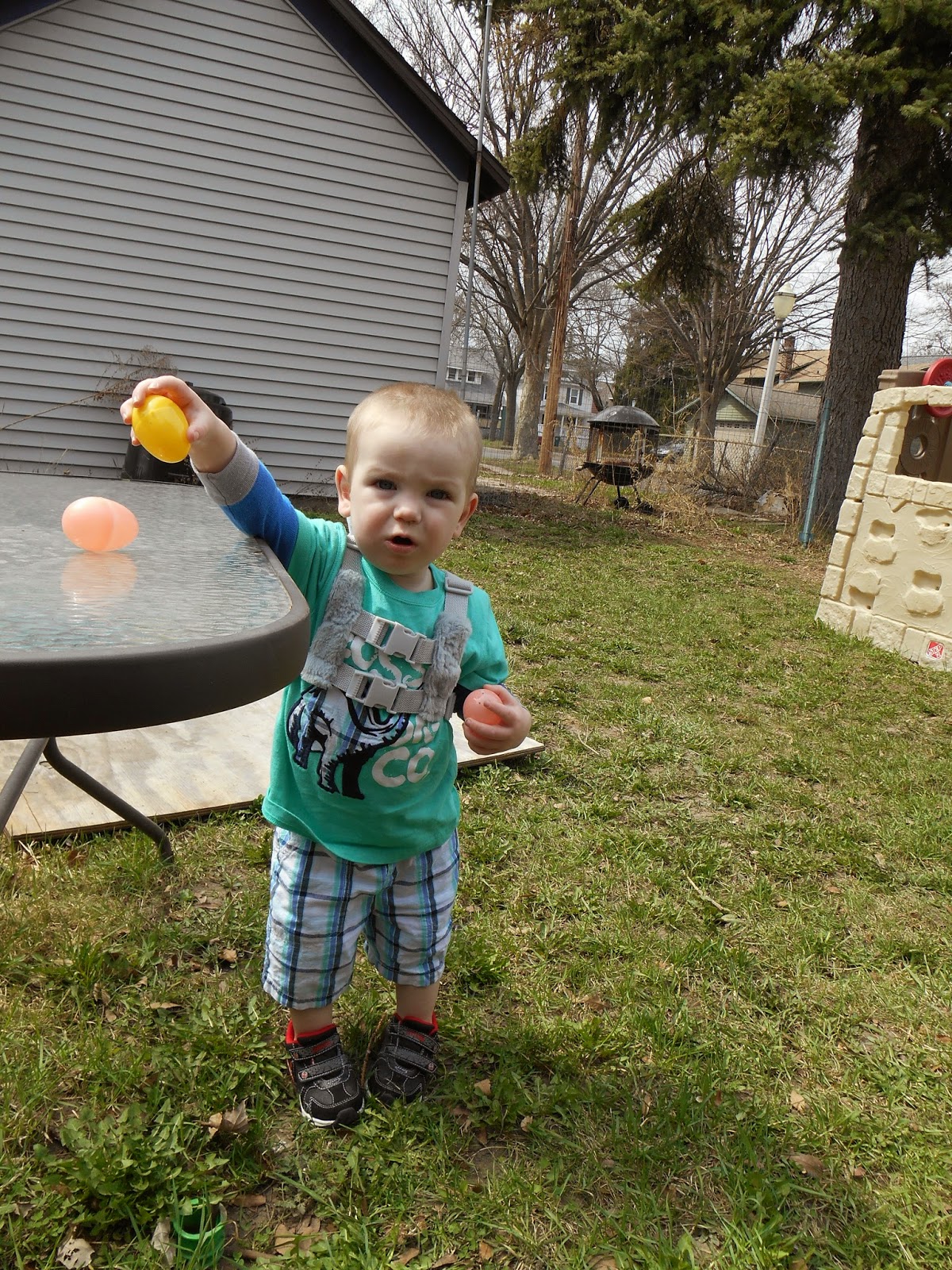 Patrick's favorite phrase "uh oh" is beginning to be replaced with a new one... "A-chooooo!"  He says it loudly and then looks around and waits for someone to say "Bless you!" and then smiles hugely that he's tricked us into thinking that he sneezed.

Thankfully he is still using "uh oh" to announce that he's about to do something that he isn't supposed to be doing.  It's nice to have a little bit of warning.

This weekend we'll be participating in the Autism Acceptance walk in our area!  Sadie's missing ballet and Paul will be taking a quick break from his frantic studying from finals, but I'm really, really excited that we're going to go and participate in the walk as a family!

A certain husband nearly always comes home from work with interesting stories. Last night it was that, in the course of doing his job as a doorman, he helped apprehend somebody who had just gotten away from a police officer and had taken off at a sprint (the police officer who'd been making the arrest did yell "get him" and so he did).  Sometimes it seems like there's never a dull moment around here!


For more Quick Takes, visit Conversion Diary!
Posted by Cammie Diane at 8:22 AM