More and more lately I've realized how parenting the children that I've been blessed with has changed my entire view of the world, and how the experiences of the last few years have really shaped every aspect of our lives.

In some ways, the topic I'm slowly sidling up to writing about, is one of the ones that had me so relieved when we finally had a diagnosis because all of the sudden it just made sense.

Before the diagnosis, before I knew anything about autism or SPD, I wasn't totally sure why there were certain parts of our daily routine that were just so different and at times so hard.

It's like back when we lived in Florida and all the other moms could take there kids out and have them play in the yards and street area in the residential part of the law school... I tried it a few times... and spent the entire time chasing Mae down the street.  I would put her down, to play, and she would just take off running as fast as she could in one direction, down the middle of the street.  She wouldn't pause and she wouldn't look back to see if I was coming to get her.  She would just keep going and going.  She was only a year old and it was terrifying and exhausting.

It didn't take long before I stopped going out there altogether.  I couldn't keep up with her.

I was still sick from the miscarriage for many of those months and it seemed so pointless.  I couldn't talk to anyone because I was just chasing, chasing, chasing her any time her feet touched the pavement.

So we went to parks that were totally enclosed and when other parents walked in and left the gate open and she would turn towards it, her eyes bright with excitement, I would race over and close it before she could make her escape and head straight towards one of the many, many ponds or lakes that dotted the landscape.

I was afraid that people would think that I was snobby or didn't want to make friends because I just couldn't bring myself to take her down there again and chase her down the street and not end up talking to anyone... but I was too tired and embarrassed that I couldn't keep up with my one year old to do anything about it.

Life went on.  The last two and a half years have flown by.  And I understand now why life has always been different for us. 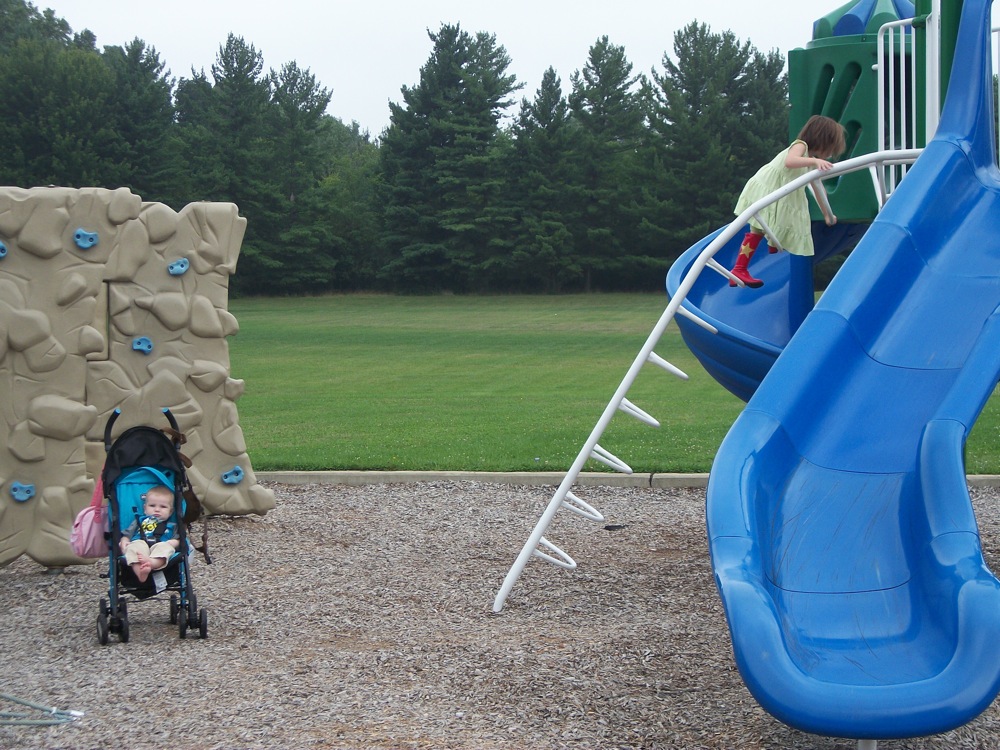 The autism acceptance walk was at a beautiful park this past weekend.  It was one I'd been invited to last year on a day when we couldn't go.

When we went to the walk I couldn't stop staring at the play areas.  They were quite lovely.  One was a splash park and the other part was a big castle play structure and I kept trying to wrap my mind around how we could make it work, how I could bring the kids there by myself this summer while Paul is studying for the bar.

Finally, when I took a deep breath and was honest with myself, I had to admit that at this point in our lives it's just not possible.  I can't take them to this park without Paul.  The splash park had a fence, the kind with three horizontal boards with giant spaces between them that either Patch of Mae could get through in about five seconds, and the playground wasn't entirely enclosed.  Both were next to a lake.  There was no way I could take Mae and Patch to that particular park on my own, when Patch could head in one direction giggling for me to chase him, while Mae sprinted straight towards the lake, flinging her shoes as she ran.

Other people see a park.  I see a totally uncontrollable area, with a highly attractive, dangerous feature. 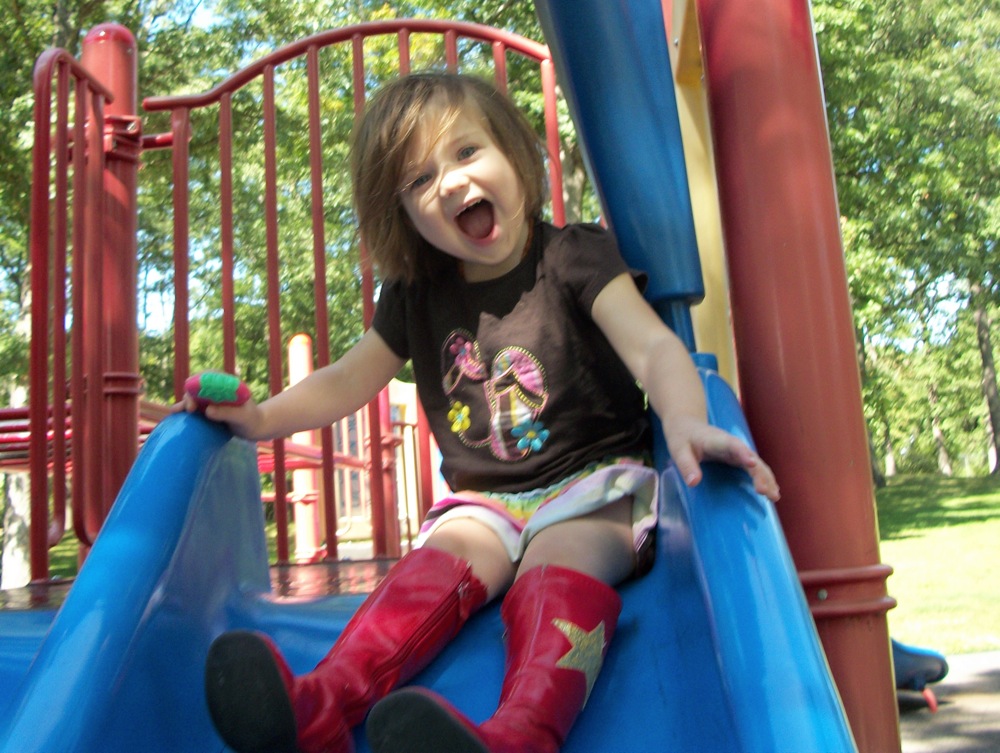 I think that's one of the things that can set special needs parents apart from other parents and can make us a little harder to understand and even cause misunderstandings.  Our views of the world are often shaped by our experiences and I know that in many ways I see the world differently than parents who've never had to worry about a kid sprinting into a busy road or running and jumping into deep water, which is just so irresistible.

These days, when I hear suggestions about things that I should be doing, extracurricular that I need to be adding to our schedule, I just sort of smile and shrug.  I know that most people really can't probably picture how different our lives are from the norm.  Our little world works really well for us.  I'm having an amazing time starting first grade with Sadie (we're getting a head start so we can take a nice little break in October), and we have therapy seven times a week now, for just about 20 hours altogether.  That doesn't take into account doctor's appointments or the fact that nearly all the time I don't have a car of my own to drive.

When I started out I meant to write a post about special needs parents and how things that seem so basic, like going to a playgroup or homeschool group, things that seem easy and enjoyable to most people, can seem like an insurmountable challenge to a special needs parent who's facing the task of tailoring these tasks to their particular child, or even just surviving them with their children.  But then I realized all I could write about was myself and my own experience and how the blessings and challenges we face have shaped our world.  For us that means that maybe we leave out things that other people think are necessary.  It means not as many play dates or as much socializing as I would have chosen if I had designed a dream schedule with no knowledge of our actual lives. 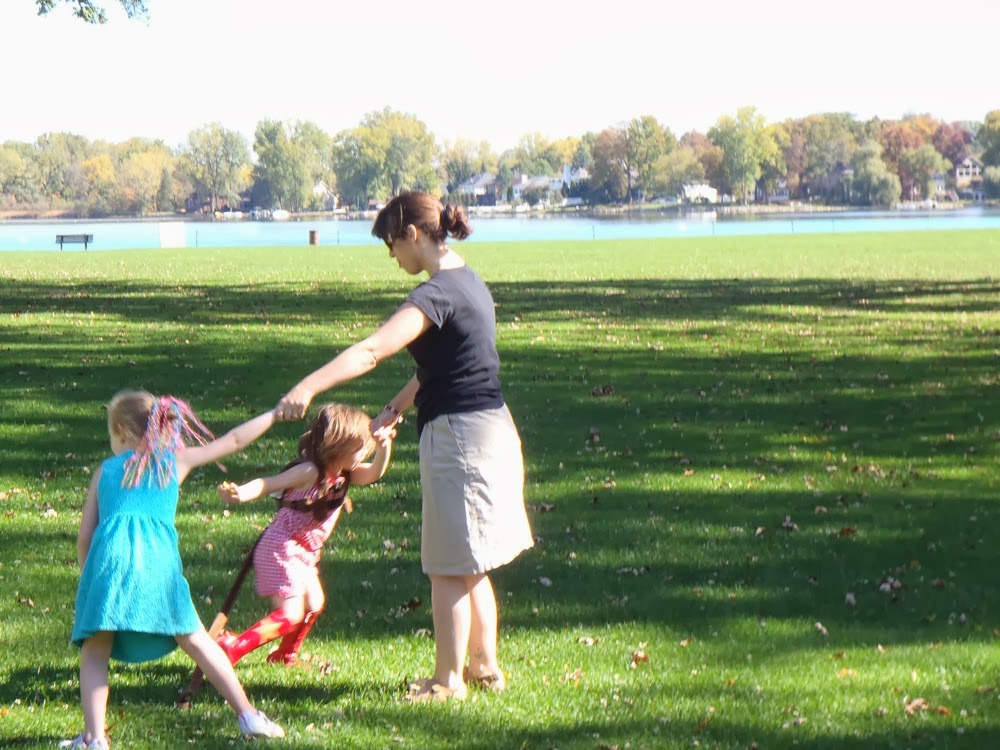 Yet somehow it works for us, without leaving me feeling like I've somehow failed because I can't sit and talk with the other moms while my kids play happily at my feet... because right now, that isn't in the cards for us.  Maybe it won't ever be.  But what we have instead, while different, offers triumphs and laughs that I couldn't have imagined before we set out down this path, moments that sweeten those hours that are a little harder to muscle through.

It might make us seem a little strange to other people, and even antisocial when I'm too tired to even think about answering the phone, much less to plan to do something involving people and playing and leaving the house, but it's also pretty amazing and wonderful... and while I can't quite wrap my brain around what it's like to sit and talk and watch my kids play in an unenclosed space (seriously, just thinking about it kind of stresses me out... because... she's a runner), I do know the absolute joy of being on a three day high because when I tucked Maggie in last week she picked up her tooth brush and pretended to brush her teddy bear's teeth and I walked around the house for at least 72 hours glowing because she'd just engaged in imaginary play and how I even took a moment to shoot off a quick email to our coach from the university to let her know about the big moment, which would be completely and utterly mundane and unmemorable if our world were anything other than exactly what it is right now.
Posted by Cammie Diane at 12:49 AM