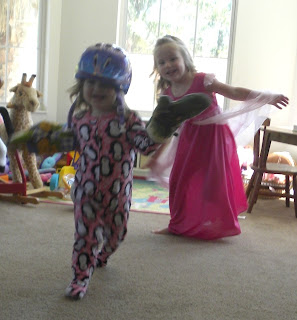 Mae Bae made multiple trips to the safety of her crib yesterday.  You see, she has this obsession of late, that's more than a little dangerous.  She knows she can't get past the outlet covers on the outlets that aren't being used.  But for several days she's been fixated on the outlets that are in use, attempting to grab cords, yank them out and then put them back in herself, while I make a mad dash across the room to grab her little hand, saying in "no!" as I move, which unfortunately, only seems to make her move faster.

She can quickly contort her little body to squeeze into tight places, reaching around corners that are a few inches wide, where plugs seemed so cleverly hidden just a few short months ago.  At one point I just sat next to a plug, which is behind a piece of furniture that she can just slide her arm past, and said no, and removed her from the area every time she made a plug pulling attempt.

She would throw herself on the ground dramatically, scream at the top of her lungs for sixty seconds and then try to convince me a seventy third time that it was really safe and I shouldn't worry about her.

A trip to sit in her crib would dissuade her for a good five minutes, and then she'd be scouting for another plug, hoping I wouldn't notice her inching closer and closer to the lamp and then sharing her outrage when I did.

Sadie would shake her head and say:  "Mae Bae is doing something naughty..." emphasizing the last word dramatically as if she couldn't believe what she was seeing.

The "I hate toothbrushes" phase only lasted a week.  But it's going to be a long week if I'm dashing across the room every ten seconds hollering "no!!!!!!!!!!!"

I have to say that she is remarkably determined.  I'm sure this is a trait that's going to be wonderful later in life.  If I only I could re-direct it from the outlets right now...
Posted by Cammie Diane at 10:44 AM