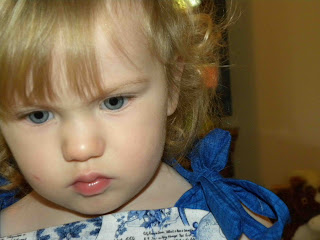 I saw the restricted number on my phone and knew instantly that it would be my doctor on the other end.  I bet she's finally calling me back to okay the medications, I thought as I picked it up, thinking as I said hello that it was a bit odd that she wasn't just waiting until my appointment this afternoon.

Then I heard the words that there was an emergency and my appointment was cancelled and that she'd reschedule for next week (Tuesday at 2pm to be exact).

I tried.  I really did.  "So," I said hoping for a good answer, "does this mean that I'm still on bed rest until Tuesday."  She explained that she couldn't let me off bed rest until she examined me.  "Because, I continued, I'm really hoping you're going to say I'm off when I see you."  She agreed she was hoping that too.  We ended the conversation when she confirmed that she also couldn't tell me over the phone that it was okay to fly back to California in a few weeks until she's seen me (mom was really hoping to purchase tickets after the appointment...).

After I got off the phone I attempted to convince Paul that I was okay to go out and get lunch.  I was really ready to suggest anything that might get me out of the house for half an hour and I thought sitting down a getting a quick lunch might be a possibility (I think bed rest just became more difficult because I'd spent the last week fixating on leaving the house for the ultrasound and appointment this afternoon... It was the goal during all that laying and doing nothing.  And now it's just a little further away...).  He reminded me that I was coughing up blood last night and that going out in pubic probably wasn't the best idea (the flu seems gone.  The evil cough remains, although they tell me the blood is just from my poor throat being ravaged from all the sickness symptoms... and the never ending coughing...).  I tried to convince him the cough was way better this morning, and I honestly believed it until a coughing fit in the middle of my words destroyed the argument.


So Tuesday it is.  Four more days of bed rest...  Sunday #3 without Mass.  This will definitely be the longest I've gone since converting without receiving...