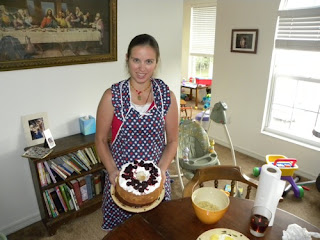 That last sentence is the problem.

Pretty much all food.

The exception is the one food that I crave one time a day, when I'm suddenly starving and need Paul to stop writing that paper he's been working on for 43 consecutive hours (without sleep... that's only a tiny exageration... he was up all night last night writing) so that he can get in the car and drive to Target and see if they still have any breadstix in the Target Pizza Hut, because Target Pizza Hut breadstix are the only breadstix on earth that sound good to me.  Except I know that they won't have them, because they don't even have them during the middle of the day when I drop by and someone, after three minutes of standing at the counter by myself, a worker wanders out from the back and I ask: "Do you maybe have any breadstix?" and the question is always met with "They'll be ready in seven minutes" which is apparently how long it takes to make them, but which is an eternity with Sadie and Mae after we've just finished our shopping and are thisclose to the exit. 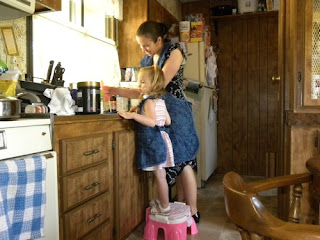 My family is starting to look at me like I've lost my mind.  I usually love food.  And I usually love cooking.  They're used to me making two full meals a day (Paul gives the girls cereal for breakfast) and we sit down and eat as a family for lunch and dinner.  Now I yell from the living room:  'I cannot stand how that smells!  You eat in there!  I'm going to stay out here in the living room and try not to breath!"

It's not just breadstix (although that's the flavor of the week).  Last week it was cheese sauce (eaten on tortilla chips).  Thankfully our car was broken down and the idea of making my own cheese sauce was far too exhausting (that tells you something too, since cooking is something I enjoy when I'm not busy thinking all food is disgusting).  That limited the nacho intake drastically.

I have been pushing myself to eat something.  Even when everything just sounds... yuck.

I'm ready for the second trimester to roll around in four weeks.  If it's like my other second trimesters everything will sound good (all the time).  And that is just so much more enjoyable!

In other news: my energy level has been pretty great for this part of the pregnancy.  The girls and I needed to go to the store this morning and so we walked 2.7 miles to Target.  Then we walked another 2.1 miles to the swimming pool (I could write a blog post about our time there!).  I thought our walking was done when we walked out to the parking lot... but someone... ahem... had left their cell phone on silent after Mass yesterday (probably because they didn't want to be bothered with their wives crazy cravings while they were writing a important paper) and didn't receive our 4 phone calls asking to be picked up.  3.3 miles later (the most direct route was not the store) we were home for a grand total of 8.1 miles (thank you google maps walking feature!).  My walking buddy and I have been walking 5+ miles a day throughout this pregnancy and I think it is helping my energy level not plummet to former first trimester levels.  And it's helping us save gas!

So... What are your favorite pregnancy foods?  Any particular cravings that stand out when you think of being pregnant?