When the phone rang last night at 7:30 and I saw restricted number I almost didn't pick it up.  I had a migraine and had just broken my self imposed "bed rest" rule and cleaned up the living room before it drove me completely crazy, or worse, someone fell and broke their leg while attempting to traverse the sea of dolls and dress up clothes and building blocks.  After five minutes of stuffing toys back in the two toy boxes alongside the couch I was wondering how I could be exhausted and out of breath when just a week ago I could easily walk eight miles while chatting without missing a beat.

At the last second I pressed the talk button, and when I heard the voice I was certainly glad that I had.  It was my doctor, calling from a conference in Nebraska, because she'd gotten my message (did I mention she's my favorite doctor ever?!?!  How many doctors would personally call from out of state to check on a patient?!?!).

I explained that I'd had two days of spotting, two days of contractions and that now, on the fifth day, I'd forced myself to drink ridiculous amounts of water from early in the morning until that night, had pretty much lived on the couch, and that I hadn't had a contraction all day (it felt like so much because before I'd estimate I was drinking around 80 oz and yesterday I upped it to well over 100 oz of non-stop drinking).  She was ready to send me to the ER if anything else were to happen when I remembered I'd already been there and had completely forgotten to tell her.  I repeated the baby's size and heartbeat, and that, at least, was a good thing.

And then I heard the words I'd been dreading and expecting all at the same time.  Bed Rest.

A week ago I would have panicked at those words.  But after basically managing for four days, from my base of operations (the pirate fort bed) in the middle of the living room, I'm feeling confident that I can survive until school gets out in less than a month.  We even have a sort of bed-rest schedule that involves watching cartoons in the morning until around the time Paul leaves for school, reading books in the play bed, playing (I move up to the couch to insure I don't get trampled by Mae Bae and her red boots (yesterday she paired them with one of her sister's princess dresses and a lifejacket, while carrying around a mini flash light), lunch, nap time (Sadie and I cuddle on the couch and watch a movie), more playing, dinner and finally bedtime.

Sadie even spent a lot of time play cleaning to help.  And she let me french braid her hair (the first time I've successfully done someone else's hair I think!  I'm only used to french braiding my own!).

And then she asked if I could take pictures of her in her braid!  I was only to happy to oblige.  Here are the latest!


Mae's not all that sure how she feels about this hug... 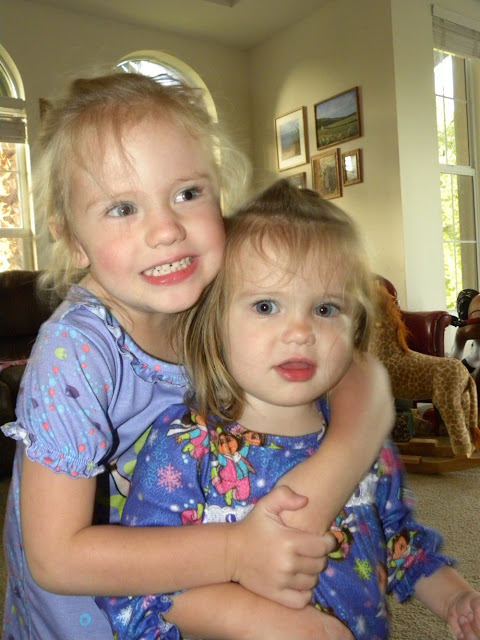 After looking in the mirror she was really excited about her hair: 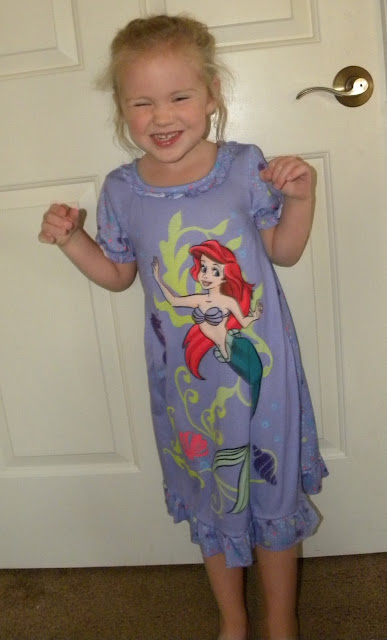 It was kind of tough to get a picture of her holding still, because she kept turning around to smile at the camera. 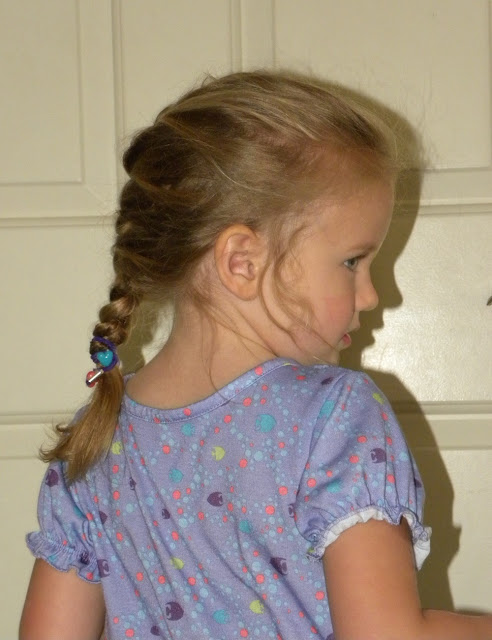 And of course I had to throw in a picture of Daddy, who was looking pretty handsome in his suit!  He's been super busy these past few days!  I'm ready for the weekend to arrive so we actually get to see him a tiny bit!