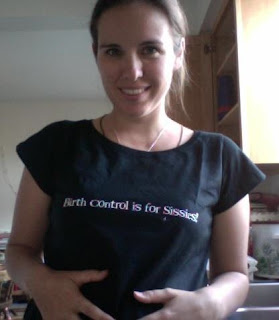 I think that this is it.  I've turned the corner.  Last night was not as horrible as I imagined and I'm hoping this is actually the end of the flu or whatever virus has struck our house.  Now if I could just get rid of this cough.  Sadie was cuddling with me after sneaking into bed with me in the early morning and after hearing me cough a few times she got up and went back to her own bed without saying a word.  The sound is apparently that annoying.  But I promised I wasn't going to write about being sick for the half dozenth time this week.

And I've been thinking about writing a NFP post, partially because it's what all the cool kids are doing right now, and partially because even if my recovering brain doesn't nail the subject, I know there are awesome brand-new links out there that might just carry the post along that I've been wanting to share with all of you since yesterday when I was trying not to sleep.

First I'll give you a few of the highlights from the recent NFP links I've been reading.  It was pretty late last night when I stumbled across Martha's latest post (I'll admit, I stalk her blog, waiting for her to post something new and refraining from posting comments in the combox like: "Hey, post something new!  If we can't get together for tea this week because I don't want to send you to the ER with this flu, you have to at least write an another awesome blog post to distract me for ten minutes!").  The first time I met Martha we were involved in a discussion about NFP.  Now anywhere else in the world that would sound unusual, but not in our little community here in Southern Florida.  Here it's not all that unusual that it comes up in casual conversations as a topic (or even in a discussion in a group), which sounds kind of funny when you really think about it.

The next post is from another favorite blogger, Calah Alexander.  Now Calah's post would have made it into the round up just because of the Doctor Who reference, but it's an honest and awesome post apart from that, all on it's own.  It's refreshing to read in a corner of the online world where it can sometimes seem that NFP is perpetually viewed through rose colored glasses. 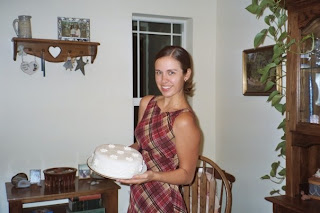 JoAnna's post reminded me of sitting in my hairdressers chair, back before I decided to hand the scissors over to Paul and save myself some prying (immediately before), a proud new mom, with a cuddly pink baby.  The woman, who I'd been going to for a couple of years, asked immediately what method of birth control we used and when I said we didn't use birth control, we used NFP, in a nervous, wow, I don't want to be talking about this with you, sort of way, said loudly, "Oh the rhythm method."  She then looked skeptical as I tried to explain temperatures and that it's actually quite scientific and reliable.  Of course, it's rather disappointing when major universities decide to use the same word of mouth description from decades ago, since we'd all like to believe we can expect a teensy bit more and Cornell at the very least should know better.

Now that I've given you three awesome blog links about NFP I'll share my own muddled at-the-moment thoughts.

I've had mixed feelings these last months as NFP has been thrust into the public eye, but I'll begin with a few disclaimers.  When I'm talking about NFP, as it's come up in the public discourse, I'm not talking about couples who are using it to try to achieve pregnancy.  I think that's one of the greatest aspect about NFP and that it's praise in helping many couples with infertility problems should be shouted from the mountain tops.  I can't even imagine questioning using it to help bring a new life into the world.  Using knowledge of when your fertile to help along a complicated process just makes sense.  And being able to gather knowledge of what's going on with your body so that problems can be pinpointed and diagnosed is another wonderful NFP aspect.

But that's not how NFP has come up in the media of late.  It's branded the form of birth control that's okay for Catholics, generally with a bit of eye rolling and the attitude of "when will they join the 21st century?"

The Catholic response has been impressive.  There've been blogs on mainstream media sites attempting to make NFP hip and modern, "sexy" even, because heaven help us, we seem to think we need to make the truth "sexy" in order to sell it.  Thus begins my problem with the tactics I've seen lately.

In the past I disliked the way NFP promoters I would read online pushed "NFP as 99% effecting!  That's better than any other type of birth control!" because I felt like they were missing the point and basically selling NFP as another form of contraception.

In these later cases I dislike the way everything has to be made overtly sexual, otherwise we're afraid that it won't draw people in.  Do we that we have to be like that commercial where women are in a store looking hip and picking out their lives, with a trip to Paris and a beautiful home?  Are we afraid that the truth, that this is right and good and beautiful, won't be enough?

I'm not saying there shouldn't be a modernizing of pamphlets and books if they're outdated.  I can't really say because my NFP book, didn't have any pictures at all.  It was green with a colorful stripe down the middle.  It wasn't the coolest looking book on my shelf, but you can bet I poured over it, because the information inside of it was pretty awesome and I was amazed that a woman could know all those things about her fertility. 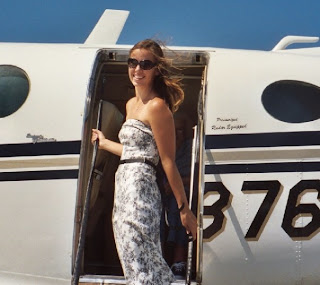 Then again, in the interest of being honest, I'd be thrilled if we never used NFP again to avoid pregnancy.  That's the plan and short of some catastrophic event I hope we're able to stick to it.  I have used NFP and while I think there are some great points, I'm also happy that my husband and I are on the same page when it comes to our understanding of "serious" as it applies to us.

And I guess that's what I wish was stressed more about NFP: that you don't have to use it!  Yes, it's useful to know.  But it's not supposed to be the default.  We're really supposed to evaluate whether we have serious reasons or not.  And that's something that the mainstream media's articles on this form of "Catholic okayed birth control" will likely never understand, because it's an entirely different sort of mentality.  Maybe if our culture regained it's understanding of life as a blessing, they'd be one step closer to understanding the Churches teachings on sexuality.  As it is I don't think we'll bridge the divide by making NFP "sexy."  Because while it's many things, it's not going to pass the Cosmo test of doing what I want to do when I want to do it because I feel like it.

But just in case I'll throw in some pictures of me trying not to look frumpy.  I wouldn't want to hurt the cause (eyeroll)... sorry I just think some of the arguments I've heard lately are beyond ridiculous... and if you're endangering your soul solely because you're afraid of how you might someday look, than you might seriously want to recheck your priorities.
Posted by Cammie Diane at 8:11 AM