On a More Lighthearted Note.. 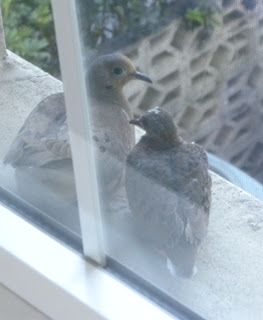 I should have realized that something was up, when the large male mourning dove began attacking Mae Bae through the window.  She was sitting on this storage/window seat that I got for my birthday in her pink fleece penguin pajamas and a bird swooped down and tried to come through the window just above her head.

At first I thought it must have been a mistake but then he started laying siege to our windows, one by one, circling the apartment frantically.  Paul was finishing up the dishes and I pointed the crazy bird out to Sadie while Mae continued to play, completely oblivious.

Paul came in to see what the commotion was about, and he was the first one to spot the little bird on the ledge.  A larger bird landed next to it (quickly labeled "the Mommy") and they began to huddle together on the ledge.

The larger bird continued to make occasional appearances as it circled around the windows, finally landing on another part of the ledge. 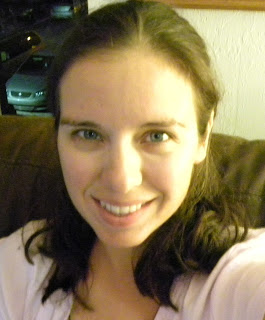 Our guess is that the little bird was resting after it's first flying lesson and was resting before trying again.  After half an hour all the birds were still there.  Fifteen minutes after that they'd all disappeared (so hopefully baby bird, who was flapping his wings quite a bit, finally flew!).

Sadie loved to watch them from a distance (and after the Mom gave her a look through the window she stayed quite a ways back!).

Now on to a totally unrelated story.  I had Paul cut my hair today.  I even pulled out my only-used-for-sewing scissors.  We agreed on just below the shoulders.  But apparently using actual sharp scissors took some adjusting to.  Which related in my hair getting shorter and shorter.  About half a foot later I had shoulder length hair that suddenly, freed of it's own weight, began to curl quite a bit (although you can't really tell in this picture!).

The new volume, combined with the humidity, doesn't seem to be a good thing.  But the new shorter cut is definitely more manageable!
Posted by Cammie Diane at 9:29 PM