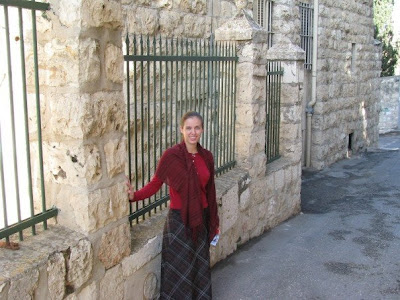 This picture was snapped a little over four years ago (give or take a season), when I was about eight weeks pregnant with Sadie, walking part of the Palm Sunday route on our pilgrimage to Israel.

Today, as we begin Holy Week (and I'm again eight weeks along), our family will be celebrating another kind-of big day (if I can pry Paul away from the paper he's been working on all week for more than five minutes)... It's a day that's always seemed so far off... a nebulous day drifting in the distant future...

And no, this isn't an April Fools Day joke (and let's face it, if it was it would be a pretty lame joke).  You can imagine how much I love that particular "holiday."  Imagine being a little kid and having your birthday on April 1st... What would your friends decide was the best April Fools Day joke more often than not?  "Okay guys, let's pretend we don't remember it's her birthday... All day today!" which can be kind of rough when you're eight!

So I'm kind of excited that it falls on Palm Sunday this year, since that kind of blots out the April Fools Day-ish-ness out.  And I'm doubly happy that it's falling on a Sunday, because let's face it, it wouldn't be a blast to have your birthday on a Friday during Lent (or Holy Week!) and a Sunday makes it even more fun!

My main goal for the day (outside of making it to Mass in 54 minutes) includes, attaching a book shelf that I built yesterday to the wall before one of the girls (namely, Mae Bae) tries to climb it like a ladder.