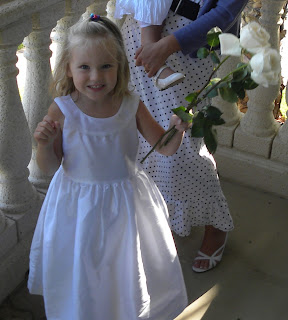 Sadie was brimming with questions yesterday.  She understood from the start that Easter is a very big day and that we'd gone out and gotten a white fluffy dress that she repeatedly pointed out: "Makes me look like Ariel"  (apparently we're about to enter into a Little Mermaid phase, because she's been singing "Part of Your World" constantly too).  She's also announced, several times, to every member of our house, that she was going to marry God today.  I think she may have also thought that it was her first communion, since I once tried to explain to her that when she is big enough to receive, she'll get to wear a pretty white dress (and of course she tried as I put my hand over her little extended tongue).  Last week she told the priest, "You missed me!" when she was passed by with only a blessing in the kneeler line.

Still I was struggling to put Easter into three year old terms as the storm of questions began.  We were in the car on the way to Mass (which is a less than five minute drive) when she began:

Sadie:  "Today is...."  She'd pause and wait with a smile, expectantly.
Me: "Easter."
Sadie:  "Easter!"  After a few moments silence.  "Is Easter a birthday?"  A brief pause as I continue to think of how to phrase things, or wait for Paul to swoop in with a better than mine explanation.  "What is Easter, Mommy?"
Me:  After another pause that establishes that Paul's letting me field this one: "Easter is when Jesus rose..."  Sadie waits, in a way that let's me know that she's listening and wants to hear what he rose from: "from the dead and defeated death."
Sadie:  "Easter is when Jesus rose from the dead."  We stop.  "You're going to have to help me get out of the car.  I don't want to get my dress dirty!" 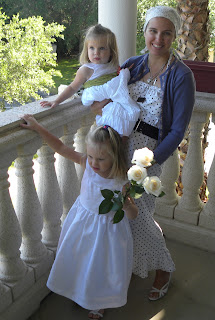 And that was that.  Until we were driving home after Church and Paul stopped off at a store to pick up a few things.

Sadie:  "Easter is?"
Me:  "When Jesus died and rose from the dead and defeated death."  I've got the answer down now.  I know what I'm going to say.  But then the questions start.  Because she wants to know more.  How long will Paul be in the store?  He's the one with the theology graduate degree.  She's processed the little bit I've told her and her questions are bubbling over.  Finally I give the Easter Story- Three Year Old Edition, a second try.  Earlier in the week she'd been asking all sorts of questions about Jesus.  Most of the questions revolve around him being human and God, which she's apparently noticed and is fascinated with.

So I explained that Jesus is God and Man and loves us so much that he came down from Earth to live with us and teach us about God and how we're supposed to live.  Some people didn't know that he was God, and so they did a very bad thing and put him on the cross and he died.  That was what we remember on Good Friday.  But after three days he defeated death and he rose from the dead and he gives us hope that if we love him and follow him we might rise with him too.

At this point Sadie breaks in, her eyes wide:  "What did Jesus do to the bad people?"  You can tell she's expecting something huge.  A nuclear blast.  The killing or Ursula in the Little Mermaid with that giant ship.  Mother Gothel falling out of the tower in Rapunzel.  Maleficent as the dragon being killed with Prince Phillip's sword.  She's read fairy tales and seen princess movies and she thinks she knows how this works... and after all, Jesus is God, and God will certainly do something more spectacular than a character in some story.  And he does.  But not in the way she expects. 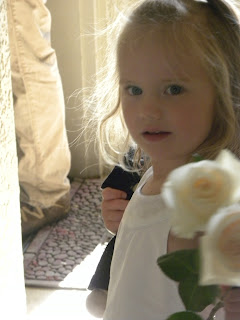 This causes a pause in the questions as Paul finally returns to the car (it's amazing how five minutes can seem like 20 when you're in the car with Sadie and her hundred not so easy questions) and then she turns to talk of being naughty and forgiveness and we talk about how God forgives us when we ask him too, but how we always need to say we're sorry when we do something that's bad.

And that was my Easter for a 3-Year Old with 1000 questions explanation.  She seemed pretty pleased with it once I actually answered the questions she was asking, instead of worrying about frightening her by saying too much.  Then it was home for doughnuts and baskets and candy (and more candy... and even more candy until Mae had a glazed over candy look in her eye as she bounced off the walls...) and a day with a break from studying for Daddy to spend with the family.

But I can't help but wonder what she'll ask next...
Posted by Cammie Diane at 9:00 AM