The First (and hopefully only?) Week of Bed Rest 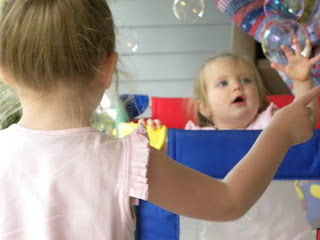 Bed rest has gone more smoothly than I expected.  The last time I stepped outside our door was a week ago this morning, and surprisingly I'm not going as stir crazy as I expected (resignation? or maybe because I'm trying to keep my hands busy when I'm sitting still watching the girls? or more likely at this point, that I cannot stop coughing long enough to think about leaving the living room...).

I expected Sadie and Mae, who are used to mornings outdoor with trips to the park, to have a harder time with out confinement.  But they've both been relishing the extra cuddle time, although their have been brief struggles over how we're all going to fit together on the couch, with a rather long hour yesterday where they both had be on my lap, under one of my scarves, giggling hysterically at each other while I made sure they didn't topple off the couch. 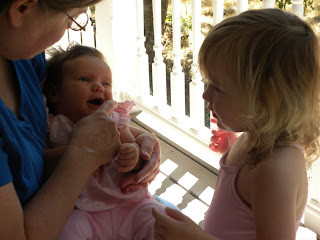 During nap time earlier this week Sadie decided she needed to have a talk with the new baby.  She's asking every day if the baby is finally big enough to come out and play and I finally suggested she talk with the baby about what it would be like when the baby got here.  I gave her a few suggestions ("Why don't you tell the baby about our family?  Will the baby have sisters?  And a Mommy and a Daddy?").  Sadie began to chat and suddenly the talk turned to Mae Bae.  I can't remember exactly what she said but it seemed to imply that things would be different for this baby, because we already have a baby right now (with her tone implying that the baby that we have is pretty wild).

I reminded her that she was younger than Mae Bae will be when the new baby was born by several months, but she didn't seem to believe that that was possible.  Although frequently when Mae Bae does something naughty, like pull all of the DVDs out of their cabinet and attempt to remove them from their cases so she can use them as Frisbees (I'm just guessing her plot because I never let it get that far), Sadie will look at me, shake her head and say:  "When I was a baby I used to do that too" which in fact is true. 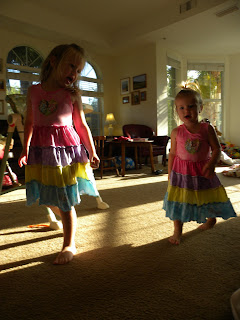 I did have a major success with Mae Bae this week, despite the fact that it was the result of a questionable parenting tactic.  Mae was trying to remove all of the water from the bathtub and spread it across the bathtub floor with giant splashes.  I'd tried everything short of taking her out to stop her and nothing was working.  Exasperated I finally said:  "If you don't stop splashing I'll..."  glancing around and seeing the tooth brush... "brush your teeth."  I realized as I said it that using something we've been working on as a good thing (although that we'd seldom get through without hysterical screaming) was probably not the best idea, but Mae paused to watch me.  I got the My Little Pony toothpaste and put it on her brush as she began to splash again, undeterred.

And so I brushed her teeth.  And she sat perfectly still and let me, and then laughed.  Because when she's in trouble and I tell her not to do something, she tends to laugh in response.  The next night I decided to try brushing in the bathtub again and again she sat still and let me.  Last night she went and got the toothbrush and handed it to me and then handed it back to me when I was done and opened her mouth so I could brush even more.

At least some good came of the giant splashing episode!

Maybe Sadie's on to something.  Mae Bae's likely to be the big sister teaching the baby to climb up the pushed in chairs to get on top of the table to dance around in their sleepers...
Posted by Cammie Diane at 7:57 AM