Crafts from the Couch: Smocking

I'm starting a new series that I'm really hoping will be one short week long, with one, or maybe two instalments (in which case it won't be a series at all!).  But on the off chance my couch time is extended beyond this week, I thought, I might as well start now.

I've been trying to keep busy during the days, especially when the girls are off playing princesses (or pirates) on their own, which gives me quite a bit of crafting couch time since I can't really be up cleaning and doing what I'd normally be doing.  This weekend I decided to try hand smocking.  And so I began googling and discovered one thing:

It's really hard to find anything about smocking that doesn't include the words "pleater" or "iron on dots."  Since I had no intention of beginning my foray into smocking with a $300 pleater and since the chances of sending Paul (successfully) out for "iron on dots" sounded rather unlikely, and since I knew there had to be another way to do this, since smocking surely predates both iron on dots and pleaters, I finally googled "smocking without a pleater or iron on dots" and found exactly what I was looking for.

After a nap time hour of studying this post I was ready to give hand pleating a try.  I carefully drew my pleating graph on a practice piece of muslin and then stitched the pleating lines.  Unfortunately by the time I was done stitching nap time was ended, and a run in with Mae Bae meant that the pressed piece of muslin, was no longer pressed.  Alas.  At least it made it through the graphing process unwrinkled. 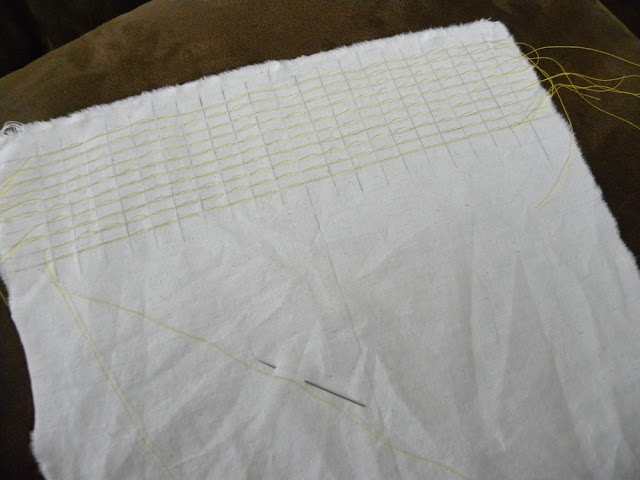 Here's a view of the front of the fabric, with it's tiny, orderly stitches just ready to be gathered into pleats! 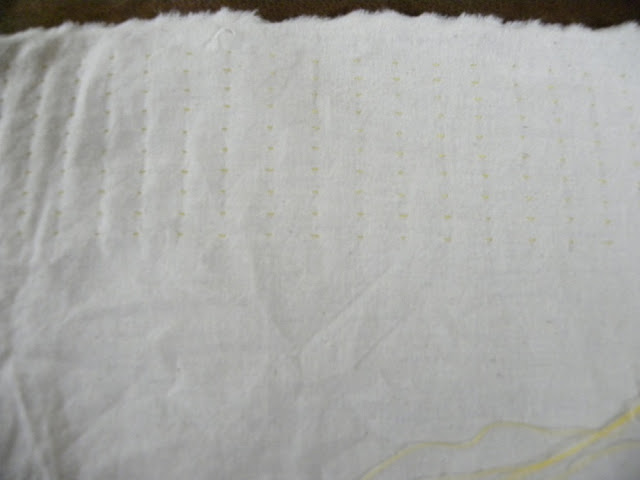 And because I was so proud of the graph when it was done, a close up! 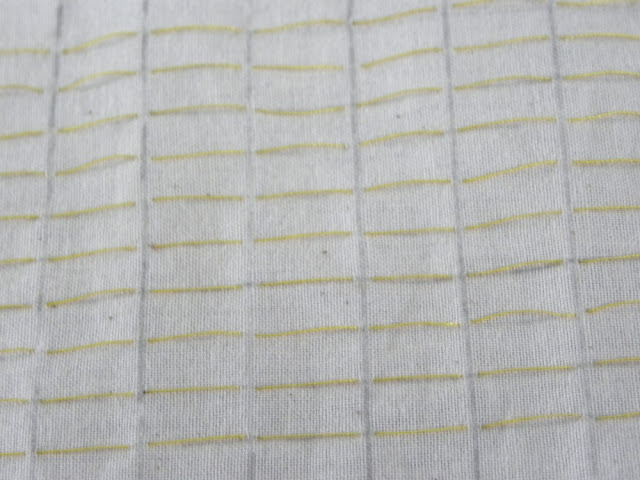 Then I pulled the strings and, voila, a pleated piece of fabric!  Without a pleater!  Or iron on dots! 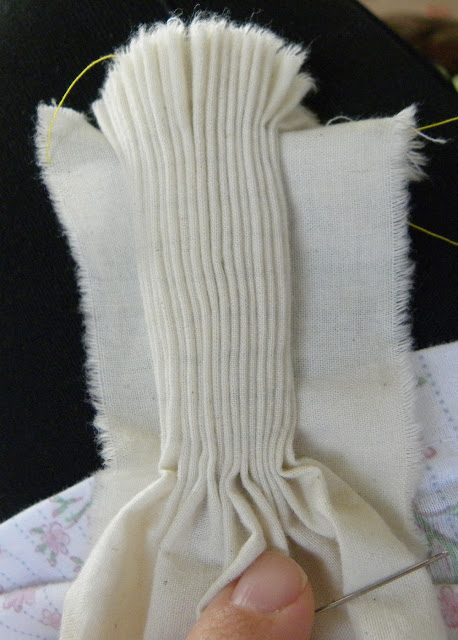 I waited until yesterday to begin smocking.  I kind of followed the same brilliant bloggers second tutorial (I'm so horrible at not going off and doing my own thing... even when I'm just learning...).  I started out having a little problem with sewing in a straight line.  And with keeping my lines the same length.  But this is a practice piece of fabric.  And by the end things were looking pretty good for a first try! 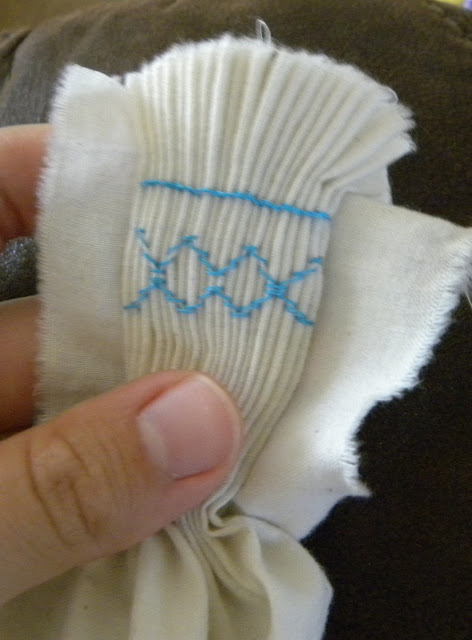 Once all the stitches were in place I snapped one last picture, then it was time for the big reveal.  I was a little nervous.  Had it worked?  Would it stretch?  Had I pulled the stitches too tight so they would just sit there? 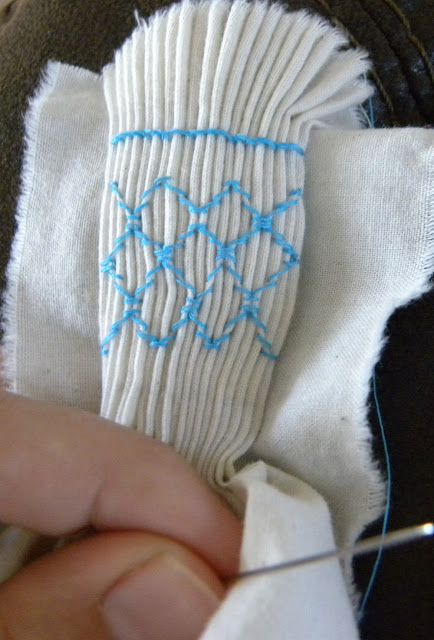 I carefully clipped the pleat strings and gently tugged at the fabric: 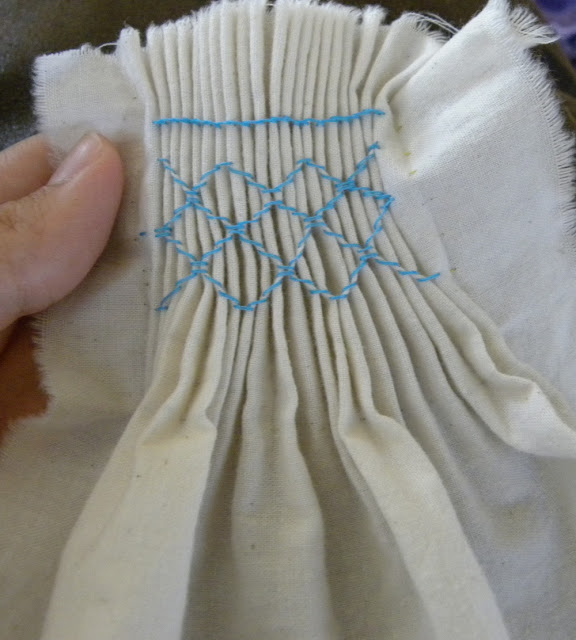 And it was smocked!  I could actually pull quite a bit further out, but it was difficult to pull it with one hand and take a picture with the other! 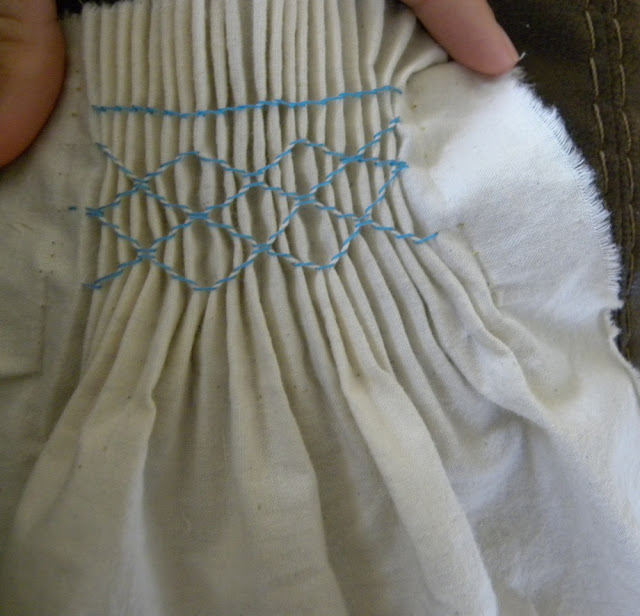 I think smocking could definitely be addictive...

Email ThisBlogThis!Share to TwitterShare to FacebookShare to Pinterest
Labels: Bed Rest, Crafts, Crafts from the Couch