"Are you going to make Mary a cake?" 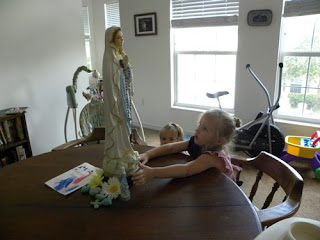 I know, I know, I've had a lot of cute-things-Sadie-said posts up recently.  I think it's because she's at that fantastic age where she's just absorbing everything and because our faith is something that comes up frequently in conversation around here, she thinks about it quite a bit.  As we got ready to go to Mass, two days ago (the same Mass where she attempted to convince the priest, yet again that she was old enough to receive communion) she began to ask questions and the conversation went something like this:

Sadie:  "Are you going to make Mary a cake today?"  I thought this was a bit odd.  She'd gone in at some point and gotten the little bakers dough Mary-baby that we'd made for the Feast of the Nativity of Mary, and had brought it out and put it on the dining room table, after having a conversation with it about finding something she'd lost.  I'm sure she'd heard us talking about how we were going to Mass for the Immaculate Conception, but we hadn't talked about what "Immaculate Conception" meant, and I don't think we'd even mentioned Mary yet.  Finals had been ruling the last two weeks around here, so this was going to be a low key feast day celebration.
Me:  "No, we made a cake for Mary's birthday." 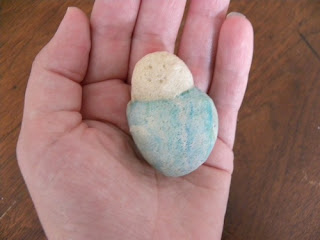 Sadie:  "Is today Mary's birthday?  Are you going to make her a cake?"  She eyed the cake flour as I got something out of pantry.
Me:  "No, today isn't Mary's birthday.  We did make a cake for her birthday."  I got down on the floor to be at Sadie's level as I tried to think of a way to explain the Immaculate Conception.  "This is the day that we celebrate Mary starting to grow in her Mommy's tummy."
Sadie:  She paused and then looks at me expectantly.  "Is she born yet?"
Me:  I quickly tried to figure out how to explain how we celebrate the liturgical year in a way a three year old would understand:  "In our story of the year she's not.  She's just a teeny tiny baby in her Mommy's tummy.  But in real life she was born a long time ago."  Sadie understands the "long time ago" part pretty well, or at least finds it interesting, because she's constantly asking me how old Mary and Jesus are.
Sadie:  "Are you going to make her a cake?"  Apparently the link between cake and feast days is pretty strong in her three year old mind.  Thankfully a neighbor made cupcakes, so Sadie did end up getting her feast day fix the next day at lunch. 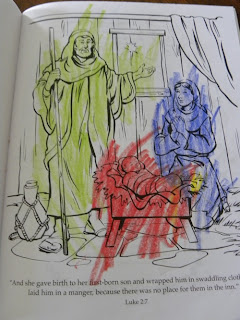 A while later Sadie sat next to me at Mass while Mae Bae dozed.  Sadie had insisted on holding the new Mass pew card (it was our first time going to the revised Mass and it did definitely make me more aware of what was being said, despite the fact that Sadie was wiggling the card pretty much non-stop).

A while later, as we stood in the kitchen, she gave it one last shot:  "Are you going to make Mary a cake?" she asked hopefully.  Maybe next year I'll remember too.

And for all of you who are interested in a more grown up explanation than the one I gave Sadie (which I was hoping to do in a post here, but just didn't get around to!  Again, maybe next year!), there's a good one here.
Posted by Cammie Diane at 7:47 AM