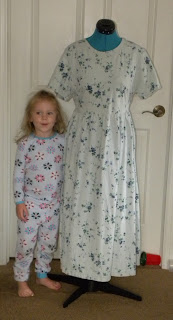 I'm super excited.  I've been dreaming about two sewing machines.  Because apparently I have delusions that four sewing machines would fit in our home.  The first was a serger and the second was an embroidery machine (because Costco has a embroidery machine for around $300 that seems to do the same things that machines that are usually 10 times more do, and that has great reviews).

With a big purchase like this, I waited and waited and finally, the waiting paid off.  A few days after Thanksgiving, one of the sales on Joann's was an online only serger deal, with a $300 serger on sale for $129.  Since it's a business expense it's tax deductible for my store.  Then I went through ebates (I know, I know, ebates!), which was offering double the percentage of cash back at that moment at 10% (I don't think I ever mentioned this, but my ebates rebate was over $120, so it really does work!  It will be far less this time without the moving expenses I'm sure!).  And I  thought I'd gotten a pretty good deal, with the serger being knocked down to around $117.  Yesterday I got an email from Mastercard, for a promotion I'd signed up for, saying that I'd gotten a $20 Mastercard gift card as a result of the purchase too!  Knocking down the final serger price to $97 (shipped).

So I'm pretty excited.  I just finished making up the rush that came in after Thanksgiving (yay!) so now I can take the time to try and figure the new machine out!  Hopefully it won't be too confusing!
Posted by Cammie Diane at 9:18 AM