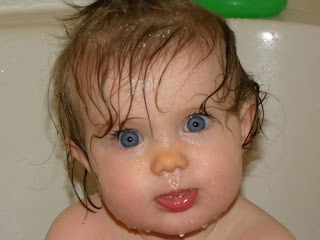 I was laying down with Sadie and Mae at the end of nap time on Tuesday, thinking of my upcoming goals for the afternoon.  Nani and Grumpa were on a plane from Chicago to Florida at that very moment and while my kitchen and dining room were spotless after a morning of working on them, the living room still looked like a toy store had exploded in the center of it, with train pieces strewn everywhere.  The girls were both waking up when the sound started and for a moment I lay and listened to it, confused.  Water was pouring down on the roof.

That sound has always been one of my favorites.  Growing up we had a metal roof and we lived in an area with four seasons.  I loved the pitter patter of rain, and the sound of snow sliding off and plunging to the ground to form a giant pile at the edge of the porch.  But I instantly suspected that something wasn't right when I heard it in the apartment.  After all, we live on the second floor of a four floor building.  Could it really be raining so hard that the rain would be that loud on the windows outside. 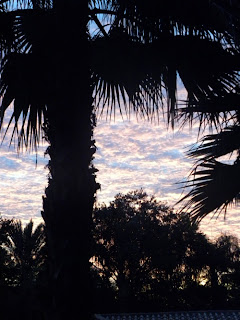 So I got the girls up and walked out to see if a giant storm had swept in, obscuring the blue sky I'd seen ten minutes earlier.  Instead the sound of pouring water was accompanied by a flawless blue sky.  This was troubling.  So I called Paul and asked him if he heard the water.  Standing on the opposite side of the apartment, he looked at me like I was crazy, so I motioned for him to walk over to the hallway and as he did he heard it too.  It sounded like a river pouring down the walls.  I stuck my head outside our apartment and the sound was muted.  Back inside it was still loud.  That's never a good sign.

Paul called the maintenance guys, but no one was there.  He sent an email to them and I headed out the front door, determined to find someone as a puddle began to form in our entry way.  Thankfully as I looked over the balcony outside our apartment I saw one of the school workers, checking his phone (he'd just gotten Paul's email).  His first words were: "It's already gotten down to you?"  He already knew (and wow!  They were very fast!).  It had apparently started two floors above us when a sink pipe broke.  He assured us that it was already stopped (which was my main concern).

I have to say, I'm amazed at how long it took for all of the water to pass by our floor.  Thirty minutes later the flow was still quite steady.  Around forty five minutes later, the water overcame the trickling down from the sprinkler as I prepared dinner.  It barely missed me (Unfortunately that didn't last.  It stopped for a few minutes and I forgot about it and stepped back over to the sink just as it started again!).  That was when I started laughing.  If Paul hadn't been in the office, studying for his second final, he probably would have thought I'd lost it. 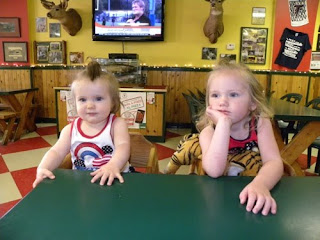 Maybe the last few years have provided a bit of perspective.  From Paul losing his job a month after Sadie was born for being Catholic (his boss was refusing to let the predominantly Catholic kids in their care go to Mass... and they were begging to go to Mass... and legally the home was required to let them go... and he spoke up...), to rushing Sadie to the hospital when our neighbors pot smoke revealed her allergy, to the four hospital visits in three months after moving to Florida, things haven't really gone smoothly.  And so, in the grand scheme of things, a little bit of water (or quite a bit of water in this case)  doesn't feel like that big a deal.  Inconvenient, yes.  Worth getting upset over?  Not if I could help it.

In the end, the water stopped and nothing was ruined (one of the nice things about having tile floors).  I'm not sure if I would have been able to remain un-upset if the leak had opened up somewhere a little less convenient... like above my fabric in the office...  or in a packed full closet that would have required a lot of drying and work.  I'm pretty sure either of those mishaps would have made the entire scene into a very big deal.

I'm not sure I could keep my cool in a fabric related incident...
Posted by Cammie Diane at 9:59 PM