Not the Greatest Secret Keeper

I wanted to thank all of you for the helpful responses for dealing with our nighttime situation!  I'm going to have to read through them all a second time, when I'm not battling a flu that makes me want to hide under the covers and never come out.  However some of you started a great conversation about when to tell kids and people outside the immediate family when you're expecting and I thought it deserved it's very own post.

I've dreamt of being one of those pregnant women that can keep a secret for four or five months, joyfully revealing sonogram pictures and gender after the 20 week anatomy check.  But after three pregnancies, I've come to accept that no amount of wishing or hoping will make that a reality in our house.

Here's the first reason.  Here's a picture of me at the beginning of the last pregnancy:

Here's a picture of my 10 week bump.  Yeah.  That's two and a half months.  You can see why making it to five is pretty impossible, if I'm leaving the house at all.

With Mae's pregnancy, at around seven weeks, I started getting "looks."  You know, the look when someone (in this case an 80 year old woman) looks down and stares at your stomach and then looks up with a knowing look that tells you that the gig is up.  Elderly women always know.  They've seen a lot of pregnancies and aren't fooled by the keep-it-a-secret tactics that first trimester moms may employ.  Unfortunately, Sadie is also a Bump Spotter, and she's always on the lookout.

The size of my babies don't help the issue.  You see, in order to look like this as you near the finish line, you have to be pretty gigantic by the end of the first trimester.  This is what nine plus pounds of baby looks like: 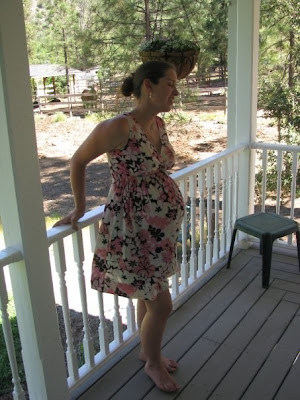 I'm not great at keeping my own secrets anyways.  Someone else's aren't a problem.  My own, especially not wonderful secrets like a new life, are hardly ever kept.  And after a few weeks of trying to hide pregnancy #3 until I was further along, I caved and told everyone.

In reality, there was no keeping it from Sadie.  Mae would have been a easy.  She hasn't seen the whole process before.  But if I look slightly rounder after a big meal, Sadie pats my stomach and says "Hi New Baby!"  So you can see how hiding a bump like the one in the second picture in this post, wouldn't have been possible unless I suddenly changed my wardrobe to sweats and baggy t-shirts.  And that would have gotten everyone I know talking.

I miscarried a month after picture #2 was taken.  The likelihood of miscarriage was around 1% at that point.  Honestly, there was no way that we could have kept the secret up until that point, even if we were better joyful-secret-keepers.

And so, while I'm always very, very impressed with women who can keep a secret for so long, I don't see myself being able to join their ranks anytime soon.

The other point that brought up, that I like very much in theory, was whether we could just change the subject when Sadie brings up her heavenly sibling.  I should mention first off  that the our little saint isn't a subject that we bring up.  But when she brings it up, changing the subject isn't really an option.  Anyone who has a three year old, likely knows what I'm talking about.

It's like the conversation we had about Snow White earlier.  Sadie saw the Snow White Christmas ornament and said: "Snow White, to da!" or something like that.  I asked her to repeat it, because usually I can make out what she's saying.  This time I couldn't.  So I said, "uh-huh" or "oh really?"  But she wasn't buying it.  The answer wasn't satisfactory.  And so she kept repeating it over and over again.    And I do want to make sure she feels like we're listening to her and there for her, especially on an issue that's apparently so upsetting and huge.

The thing is, she's this happy, joyful kid, talking about kid stuff almost all the time.  It's just between 7-10pm, in brief spurts, that she gets very upset and starts talking about the baby (or wakes up talking about the baby).  And so we're plodding on.  But I really appreciate that comments and suggestions and I know we'll be trying many of them to find out what is going to help her get through this.  Thank you all again!
Posted by Cammie Diane at 8:25 PM