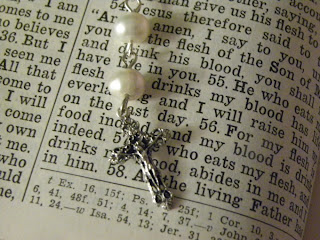 In the beginning this blog was a secret.

I told Paul about it after a few days of writing, but other than that I was silent.  I kept my other, Mommy-Blog, up for a while and tried to balance them both, but in the end this blog won out, because I felt like I could write about anything here, and on my other blog it was more of a baby-type journal.  This gave me a lot of freedom in what I posted, because I didn't have to worry about offending anyone that I knew in real life, which does pop into my head now before I post, as I weigh whether or not friends and acquaintances will be offended by what I've written.

On some topics it's probably fairly obvious that I don't care if my view offends some.  The truth is the truth.  Good is good and evil is evil.  Friends will have to accept that I am pro-life now and that I won't tiptoe around the subject here (even as I accept that some of my close friends are pro-choice and that we may never agree on the subject).

But when I cross into the realm of "my day" and "what's going on here" it becomes a little more hazy.

I might write something on my blog and see people I know in real life bristle when they see me, or worse, act strangely around people that I love (who are in no way accountable for what I write here). 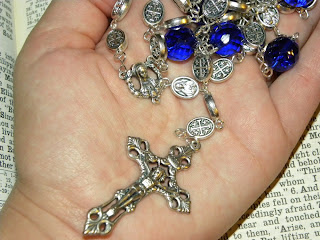 Of course, I'm sure the last four plus months haven't helped.  I haven't been particularly sociable.  In fact, the idea of being social is pretty painful right now.  I've been riding along on the ups and downs that have followed the miscarriage and the experience has been more dramatic of late.

In the beginning it was almost easier.  I felt very much at peace and I was grateful for that peace.  Lately it's been more difficult.  It's hard not to think that I should be eight months along right now and I'm really dreading February 7th, which should have been my due date.  Paul has school that day and so crawling under the covers and not getting out of bed doesn't seem like an option.  So I guess it is true that it's a difficult time for those who have suffered the loss of a child or or who face the cross of infertility around the holidays (not that I doubted that it was true... I guess I just thought that somehow I'd miraculously sped through this part of the process).

I think that maybe the mourning part of the process was held off because I was so busy trying to find a doctor who'd believe me and help me those first three months.  I feel like I spent my time fighting for my life, and now that that is finally over I have time to think.  And I keep thinking about what happened in the hospital, especially now that the healthcare company is pretending not to have received the dispute that was discussed over the phone and that they received the next day, and have turned it over to a collection agency who insists I pay for being berated and left alone and ignored when I called for help, instead of being thankful that we haven't yet reported them to the state (next on my to-do list, now that I'm no longer busy not-dying because of their incompetence).

I worry, senselessly at this point, that we won't be able to have any more children as a result of the cruelty and incompetence at the hospital, and later from seeing Doctor H who thought I was making the whole thing up and handed me a pack of birth control pills (which my second OB said wouldn't have been a high enough dose to do anything) while making a crack about how he doubted he could convince me to take more than two months worth.  And I wonder how having "debris" in my uterus for over thee months, will affect any longed for future pregnancies.

Then I feel guilty for being so upset over that possibility, when I know so many beautiful families online and in real life, who struggle with the cross on infertility, and how we have already been so greatly blessed.  And I wonder if, having gone from being fairly terrified of becoming a mom, to accepting God's plan for marriage, to longing for the opportunity to be a mother to a large family, the next step might be accepting that this is it (and that thought pretty much makes me cry instantly, to let you know how I'm doing on the "accepting whatever comes along" front...).  I hope it's not, but it's something I'm trying to be open to accepting (again, I'd say I get a big F so far).  Sometime praying "not my will but yours" seems a bit easier than others.

And I know that all of this has affected my perception of Naples.  How maybe I would like it here quite a bit more if we'd arrived and none of this had happened, instead of driving around and seeing signs for the "wonderful" hospital everywhere.

The list goes on and on, although I try to drown it out by thinking that the birds are pretty, and that there are nice parks... and hey look, I saw another alligator (we're approaching 30!) sunning itself by the side of the freeway.  I did like the entire area between Naples and Orlando quite a bit more (we took a back road that Yahoo said was the "most direct", although by far the slowest...), with towns that felt (to me) more like towns than giant sprawling tan outdoor shopping areas.

Maybe I need to go back and reread my own post on suffering.  This too shall pass.  And hopefully I can have a more joyful attitude about it, instead of curling up on the couch in my snuggie (which I did last night) when I have two dozen things that need to be done in the next few days.  I'd like to be able to say "not my will but yours" and truly mean it on every level.

I think one of those things I'll be adding to my to do list will be the Nine Day Novena to Saint Philomena.  And maybe I'll throw in a Saint Gerard Novena too.

And for all of you who have read this far... thanks for putting up with my rambling.  I'm hoping it's out of my system now.
Posted by Cammie Diane at 8:35 AM