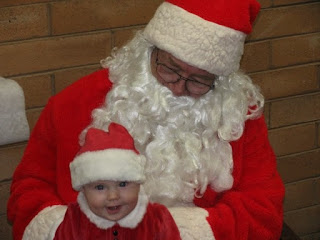 I’ve actually been thinking about writing this post for a week or so.  A fellow blogger asked me this question when we were at Disney World, and a friend and I had been discussing it while taking our children on a walk a couple weeks ago.  And yet I hesitate.  Why?  Because I have the feeling that the topic has the potential of exploding, in a hornets nest sort of way, no matter how I handle it.

On the other hand, half the time when I think a topic might turn in that direction it doesn’t... While a post that I feel is perfectly innocent and uncontroversial that explains why I’ve done something, might turn into a fifty comment torrent of less than pleasant conversation.  So maybe I should just stop trying to avoid parenting controversy (the only type I really consciously try to avoid, in other words the “Mommy Wars”), because I never do a particularly good job of it.

The topic is one that I’m sure some of you have pondered and that others probably haven’t given much thought about because the answer for many is so obvious is…. Santa.

When we got married I was adamant that we would “do” Santa.  Yet as I read more and more accounts online of adults who said they’d fallen away from the faith when they realized that Santa was a lie, and just figured that the whole Christmas story was in the same vein, I found myself pausing to give the issue more thought.  I wanted to disregard it out of hand.  But over the years I’ve read a number of writers that made the same claim. 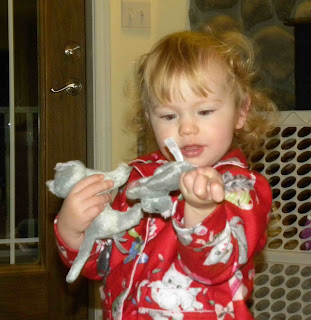 Which basically brings up the issue of outright lying.  I make every effort not to lie, in part because I know that it's wrong and I know that if I do, I’ll be headed right back to confession, even if I just got up from kneeling behind that screen 15 minutes ago, and I’ll have to tell someone what I’ve done/said.  Lying, in my mind, is different from many other sins because it pretty much always involves a conscious choice to do something wrong.  I might say something mean without meaning to.  I might say something gossipy, without intending to.  But if I lie, I know what I’m saying isn’t true.  And that is a problem worthy of a pretty immediate trip to the confessional.  The other half is that I want my children to trust what I saw implicitly.   And I absolutely don't want them to think that lying is okay.

Besides that is the fact that Sadie knows what Christmas is.  She’s been talking about Baby Jesus’ birthday for weeks.  She sings happy birthday to him.  She asks if it’s his birthday yet.  We read stories about the Nativity.  She’s pretty much on cloud nine about it.  And so at this point, introducing Santa as “real” in the aspect he’s portrayed in these days, might seem rather confusing.  I’m not even sure how to bring it up as “real” if we wanted to because it doesn’t really fit with the rest of the story.  What would I say: “You know how we’ve been talking about Baby Jesus and Mary and Joseph?  Well there’s also this jolly old man in a red suit…” which, at this stage, seems like it would be kind of confusing.  She's so enthralled with the reality of the Nativity.  I really don't think there's anything that could add to that pure, wonderful joy.

At the moment we’ve found a sort of balance.  I read the girls the Night Before Christmas pretty frequently, just like we read about princesses and wild animals who talk.  We also talk about the saints and read books about the saints.  I don’t go out of my way to say “this is pretend” and “this is real” but when I’m asked I’ll be honest.  So far, she doesn’t ask. I'll do the same thing if she ever asks me about the Disney princesses or anything else that's pretend.  As a adult who grew from a child with a very active imagination I'd say that something existing only in our imaginations doesn't make it any less wonderful!

We already celebrated Saint Nicholas’ feast day this year with presents in the girls’ shoes outside.  Sadie was thrilled.  We will be doing stockings at Christmas. Sadie's been watching me sew the cupcakes she's been longing for (out of felt) for weeks.  So I imagine she'll have a pretty good idea where they came from.

Despite our decision, when we were somewhere where “Santa” was going to be posing for pictures I asked her if she wanted to see him, and she said “no!!!!” in a terrified voice (apparently she still remembers past visits, which involved outright hysteria…).    She is into the reindeer (I imagine from the book).  We talk about reindeer way more than the big man in red himself. She's made up her own version of "Jingle Bells" that goes:  "Jingle Bells, Jingle Bells, Jingle Bells... Reindeer pull a sleigh!"

So our game plan, at the moment, is to tell the girl’s stories of Saint Nicholas, Bishop of Myra, when we’re asked and say that yes, he is real, he’s a Saint in Heaven with God, no he's not that man with the line in the red suit.  And of course, I’ll certainly also teach them not to ruin the secret for other kids (a concern that usually comes up... and of course, in the same vein, I greatly appreciate it when people who know our decision and our reasoning, respect it, instead of undermining our parenting decisions and confusing our children!  It's a two way street!). 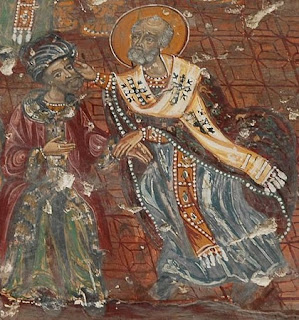 Sometimes reality is so rich, that it doesn’t necessarily need the addition of a myth.  And when they’re old enough I’m sure they’ll appreciate the stories of Saint Nicholas defending the faith (did you know one story about him is that he punched Arius, author of the Arian heresy, which claims that Christ is not divine, in the nose at a council?), alongside the stories of his generosity.

I totally understand why people “do” Santa (I know we’re in the minority here).  And no, I don’t think it’s inherently damaging (although those stories I read did stick with me and influence us).  Just to preempt the conversation heading that way…

Still this is the route that’s working for us at the moment.  Father Longnecker, over at Standing on My Head has an interesting post that gives his take, much more eloquently than I’ve explained here!

Have any of you taken this route for various reasons?  I know it's a bit odd, but then again, so are a lot of our decisions!

The picture of Bishop Nicholas punching the heretic Arius in the nose is borrowed from the Saint Nicholas Center page.
Posted by Cammie Diane at 9:10 AM