We set off early this morning so that we'd arrive when the park opened and get in a full day of fun.  Sadie could hardly wait on the car ride there.  Finally, after an agonizing ten minute drive (agonizing to the three year old who was asking if it was morning before 8pm the previous night), we arrived and took the tram to the ticket booths and then the monorail into the park.

I had read up on toddler/baby Disney World strategy last night after everyone was in bed and when we arrived at the park I had a plan.  We went straight back to fantasy land to ride as many rides as we could before the crowds arrived.  We breezed through the carousel, Dumbo ride, Winnie the Pooh ride and Tea Cups pretty quickly and then headed over to the other side of Fantasy Land to go on the Small World ride, the Peter Pan ride and to see the Mickey Mouse 3D Phil-somthing movie.  I was a little nervous about taking Mae in to the movie, but it was really good (3D technology seems to be a lot better than I remember it!) and both girls sat quietly through the whole thing).  And all of that was before lunch!

Here Sadie is on the Tea Cups.  This is where we discovered that she had a need for speed... 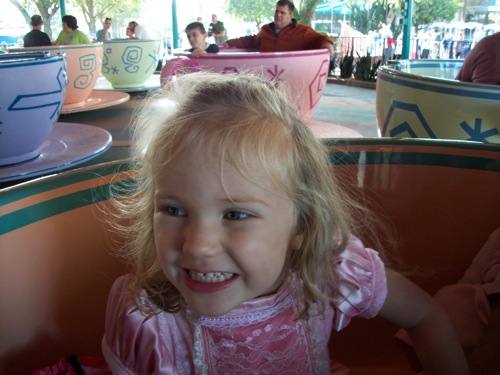 After lunch we headed over to Frontier Land.  Can you read the name of the ride that we're coming out of?  It's Big Thunder Mountain Railroad.  Sadie is over 40 inches tall, which means, at the ripe old age of three (she isn't even 3 1/2 yet!), she's tall enough to ride most of the faster rides at the park.  I thought we'd try out Big Thunder Railroad to see how she liked it before trying anything else.  As the car climbed in complete darkness I began to wonder if this wasn't a little too scary for Sadie.  And then she started to giggle.  And she began to yell:  "Ready, Set, Go!" and "Faster, faster!"

As soon as we got off the ride she was begging to go again, which was perfect because the park has a ride-swap program.  This meant that when we got to a ride Mae couldn't go on, we'd go up and ask the fast pass person for a swap pass.  Sadie and one of us would stand in the regular line (the longest ones we saw today were like 10-15 minutes), while the other one walked around with Mae outside.  Then when the pair on the ride finished, they'd come off and Paul and I would swap places and Sadie and whoever hadn't gone on the ride would go back and use the fast pass to bypass the line and go on the ride a second time.  It was a pretty sweet deal for Sadie.

Big Thunder Railroad was a success, so we tried Splash Mountain.  Sadie thought that Briar Fox and Briar Bear were very scary.  But she giggled and cheered the 50 foot waterfall drop (twice!) and begged to go again each time.  She's pretty fearless when it comes to rides it seems. 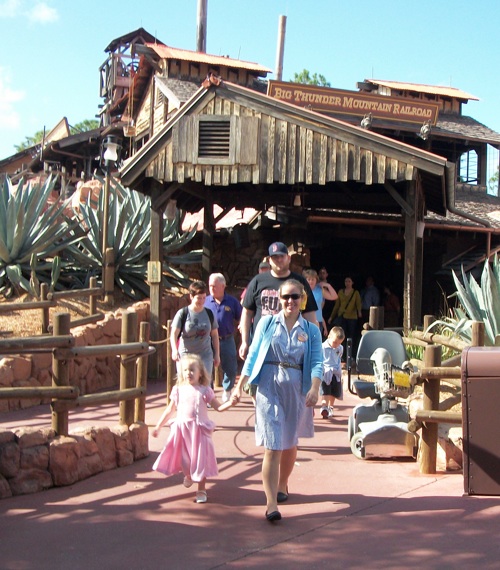 We headed to Adventure Land after Frontier Land and went on the Pirates of the Caribbean ride, where Mae Bae fell asleep, mid ride.  Three minutes later she woke up when we left the ride (and refused to nap for the rest of the day.  She was determined not to miss anything).  We were on the Jungle Cruise when it began to pour rain, but it was back to blue sky by the time we'd reached the end of the river and emerged from the covered boat.

Then Sadie met her first Disney Character.  Unfortunately with her new hat she thought that the best thing to do was to charge Mary Poppins, with her little head down like a bull.  Thankfully the hat is soft.  And Mary Poppins was very gracious as we apologized and told Sadie that we do not charge people with our hat, and she said that she didn't think she'd done it on purpose, she was just a little top heavy with her new hat. 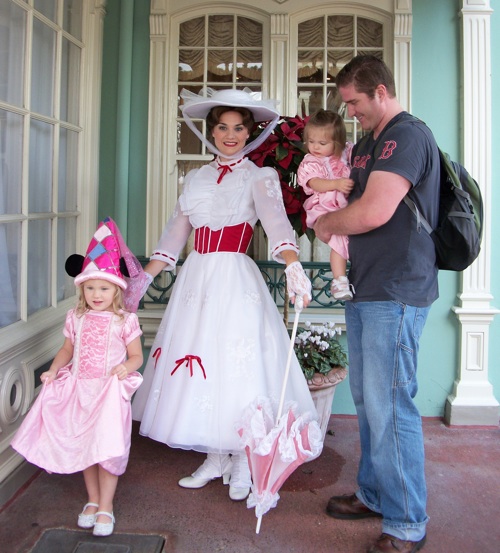 After dinner we headed over to Epcot.  Sadie announced that she would like to live in an Earth shaped space ship. 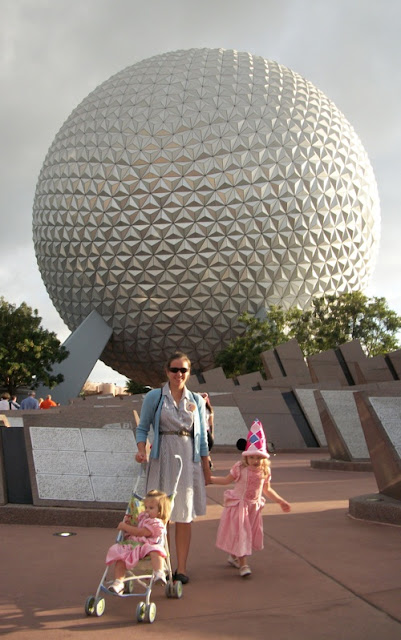 This is my favorite picture of the day.  You may not be able to tell why until you see the close up: 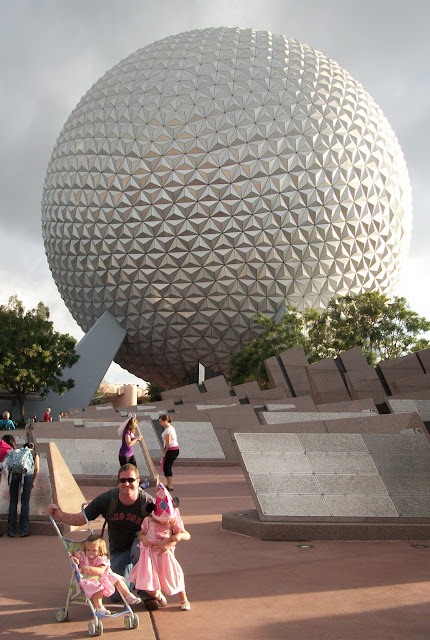 Paul smiles through the tantrum without batting an eye.  This would be a I'm-done-with-pictures-pinch. Both girls were actually really well behaved 95% of the time today.  But we still had our moments! 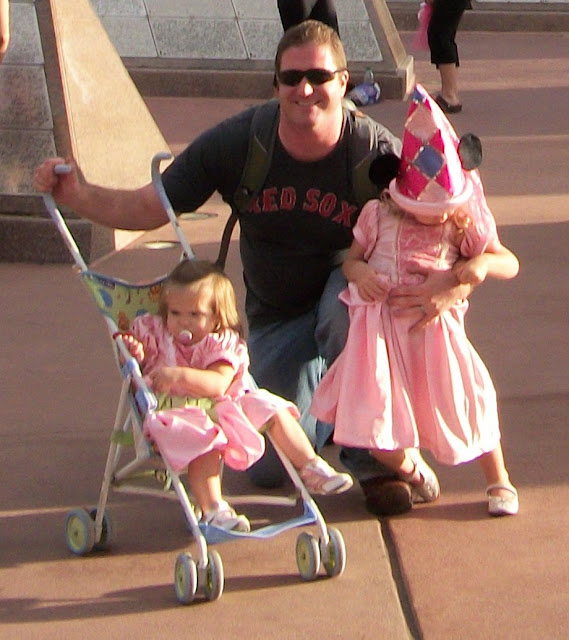 After a walk around Epcot, which included going on the Nemo ride and walking what felt like miles and miles (my feet were pretty tired after hours of walking!) we took the ferry back across the lake, and then the monorail back to the main park.  In this picture I'm pretty tired!  And Mae Bae is trying to stand up to climb out of the boat!

I have to say one thing kind of surprised me today.  We brought a stroller for Mae.  Sadie walked pretty much everywhere until about 4pm, when she got tired and Paul started carrying her around Epcot.  I was rather surprised to see how many, not exactly fit (to try to put it mildly), kids in the 8+ range were in double strollers (because they wouldn't fit in the single ones) at like 10am, being pushed around by their parents.  Something just seemed off about that.  It seems like Disney World would be a great place to get your kid outside and running around (or at least walking).  Instead of being pushed from ride to ride with a bag of cotton candy in their lap.  Anyways, that's just an observation.  I have a hard time imagining kids when I was a kid riding in a stroller after a certain age... 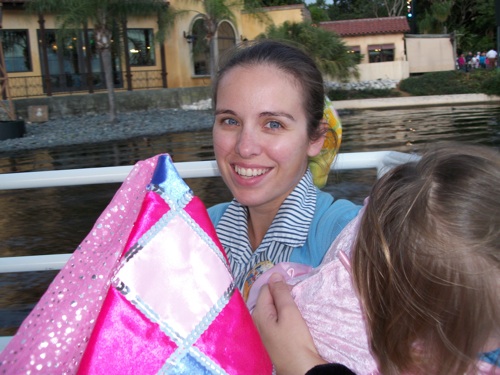 And that, in a nutshell, was our day!  I feel like we fit a lot in, since the park wasn't very crowded!

This is the first vacation we've taken with out little family in a very long time and we're pretty excited!
Posted by Cammie Diane at 10:18 PM