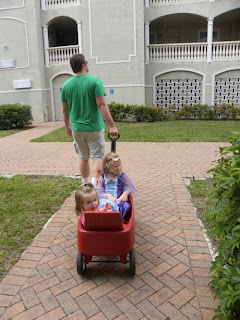 When we moved to Florida a lot of people we knew who had visited the state repeatedly told us: "Oh we visited last winter and it was soooooooooo nice."  This was specific to the town we were moving to, in particular, and so when we moved here in summer and it felt like we were swimming through the air with 95 degree temperatures and 50 billion percent humidity, I would cling to the thought that winter was only a few short months away and that then it would be "nice."  After all, it might be 110 degrees back home, but it was 110 degrees with dry air, which does not feel nearly as unbearable as the soaking wet, instantly coated with sweat heat of South West Florida.

And I have come to the conclusion that we have a very different idea of what "nice" is.  I think it may have something to do with the difference between living in a place and visiting that same place.

On Christmas Day the weather man told us it was going to be 85 degrees.  Yesterday it was supposed to be 80 degrees and we were going to get .7 inches of rain (and I'm sure we did because it poured).  While there was a brief break in the mugginess in November, the humidity appears to be back with one weather lady saying "we have a high pressure system moving in, so it's going to be nice!" in an annoyingly chipper voice, while I thought about throwing my shoe at the television because this... this... is not "nice." 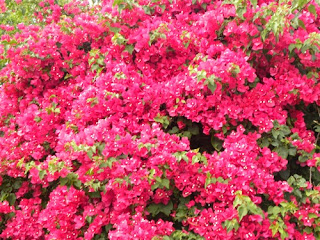 I will admit that I love cold weather.  I own skis and a snowboard.  I grew up making snowmen and having sled runs through the backyard.  Then we'd huddle round the fire pit, which had the snow cleared away, and make s'mores.

I usually love warm weather too.  What I actually enjoy, I think, is the change of the seasons, and not the perpetual muggy warmth that has two modes: hot and hotter.

I do now know when Paul asks:  "Where do you see us living?" that my answer now includes: "Some place with seasons!  Four of them!!!"

More than that, let it be someplace where my yarn based crafting skills can be put to use and appreciated.  Who wants a cozy hand knit baby sweater in Florida?  Or a snuggly afghan.  No one!  Because it's just too hot to even think about snuggling up in anything wooly.  It's more like year round spandex (swimsuits).

I think it must be different for people who were born here.  They seem to be used to the thick heat and are content with the perpetual summer (broken of course, by an occasional tropical storm).

So for all of you who had snowy white Christmases... enjoy the cold for me!  Have another cup of hot cocoa and snuggle by the fire!  I think I need to go turn the air conditioner down before it gets too hot today...
Posted by Cammie Diane at 8:35 AM

Email ThisBlogThis!Share to TwitterShare to FacebookShare to Pinterest
Labels: Florida