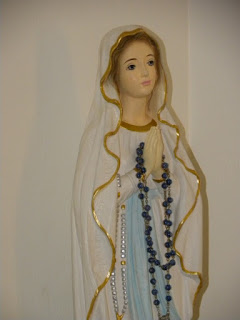 When I was in school (public) we began instrument lessons in fourth grade (I was the most terrible clarinet you've ever heard, demonstrating early on my complete lack of rhythm or musical talent) and had a year of chorus in fifth grade.  Around Christmas that year, we sang a song that caused some parents to pull their kids out of the class (temporarily).

I remembered the words, which were Latin, because they were really drilled into our heads, even though I didn't understand what they meant at the time.

When I first became Catholic, not quite five years ago, I was surprised when I first heard a Hail Mary in Latin, because I had always thought that that was what we were saying, since the song began with Ave and had the word Maria in it too.

I've been curious to see what it was we were singing all those years ago, and so this morning I tried to type out the first verse from memory to see what I could find.  It was:

...which was the part that I've had going through my head, on and off, for the past, 18 years.  I had some idea what some of the words were like "ave" "verum" "cruce" and "homine" but having an actual translation helped greatly:

"Hail, true Body, born
of the Virgin Mary,
who having truly suffered, was sacrificed
on the cross for mankind..."

The entire translation continues (in English):

"...whose pierced side
flowed with water and blod:
May it be for us a foretaste (of the Heavenly banquet)
in the trial of death.
Oh dear Jesus, Oh merciful Jesus, Oh Jesus, son of Mary,
have mercy on me.  Amen."

Out of all the songs we sang, this is the only one that hasn't faded and completely disappeared with time.

I can't imagine a public school singing it now a days, even with the ability for parents to opt out...  yet I'm very glad that I know it, and that I was humming it to myself and occasionally singing it, all these years.

The wikipedia page says that "The poem is a meditation on the Catholic belief in Jesus' Real Presence in the sacrament of the Eucharist, and ties it to the Catholic conception of the redemptive meaning of suffering in the life of all believers.

Yes... I can't imagine a song I would rather have had echoing around in my head for the last nearly two decades.

Thank you to Cliff for finding the clip!
Posted by Cammie Diane at 9:18 AM