Daily Dose of Cuteness: Round 2: Sadie's Determination to Receive... 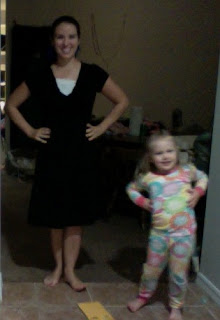 We stayed on campus for Mass today and Sadie apparently thought she had a chance of tricking a priest that she didn't recognize into giving her the Eucharist.  I was carrying her when I went up to receive and as I turned to go back to my seat I realized that she'd been sticking out her tongue and pointing to it, while we were at the front.  Thankfully this priest didn't fall for it either.  As I pointed out to Sadie: "If you're young enough to be carried up to the front, he knows you're probably too young to receive."  But hey, she's probably about halfway there!

When we returned to our seat I whispered: "Did you just try to trick the priest into giving you Jesus."  He answer was an emphatic: "Yes!"

I have a feeling we're going to have this conversation to come many times in the coming years.
Posted by Cammie Diane at 1:43 PM