My Most Useful Purchase of the Year

Last month I returned from a fabric purchasing expedition with a slender silver colored box.  We were on our way to buy groceries as I removed the box from the bag and explained to Paul that I'd made a wonderful, much needed purchase that would make my life so much easier.  He looked more than a little skeptical as I said the words "spring action scissors."  I rushed on explaining that they were 50% off, making them only $24 and that with all the sewing I do they would make life much, much easier.  That's when he started to think that I'd completely lost it.  Who buys $50 scissors, even when they are 50% off?  And spring loaded?  He was not impressed.  There was a comment of:  "What, so you don't have to do all that work to pull the scissors back open when they're closed?"  I chuckled, because it did sound kind of ridiculous when he put it that way. 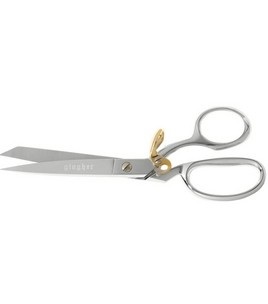 It's been nearly a month, however, and I have to say, they are by far the most useful thing that I bought this year (last year's most useful purchase would be these pliers).  The only part of sewing that I disliked before was cutting out fabric.  It was frequently frustrating.  And I was sewing so often that my cheap sewing scissors would be dull after a few weeks.  I did buy a scissor sharpener that was also on sale, but when I saw that these scissors were 50% off I figured that I'd make an investment and see if high quality scissors really were as important as I'd read they are in my sewing books.

I can now say that they really are that important.  And for me the spring action feature is definitely a plus.  When I sewed the girl's dresses before we left for Disney World I sewed 18 hours in two and a half days (I had some late, late nights).  When you're sewing that much, every little bit of help is a big plus and having the scissors spring back out on their own made cutting faster and easier (because my hands were feeling pretty tired by hour 4!).

The angle of the scissors is also better for cutting fabric, with the blade laying flush against the ground when I cut I don't have to hold by hand and arm at an awkward angle to compensate for the straight angle of regular scissors.  And they cut through fabric, even thick fabrics like the velvets I've been sewing lately, like a knife cutting through soft butter.  As you can see I'm a big fan.

My scissors are still living in their little silver box when they aren't being used.  Everyone has strict instructions not to use them for none sewing pursuits.    They won't be cutting paper or plastic anytime soon.  So if you are someone who's cutting fabric in a large quantity I can definitely say that sewing scissors are a pretty useful investment.  I wish I'd figured that out about 12 months ago!

The scissors pictures are from the Joann's Fabric Website.
Posted by Cammie Diane at 3:19 PM