Sadie's Mass Injury, a Misunderstanding and the Mae Bae "Incident"

Yesterday at mass Sadie was standing next to a window (we were at the very back) at the English Mass that we'd gone to after oversleeping (waking up at 7:17 am is oversleeping in our house) when she slipped and banged her face against the marble windowsill.

This picture was taken a little over and hour after Mass was over.  It's now turned into a noticeable purplish-blue color, that's not entirely unexpected since we'll be snapping quite a few pictures this week, and somehow the possibility of picture taking seems to be preceded by some sort of a facial injury in our family. 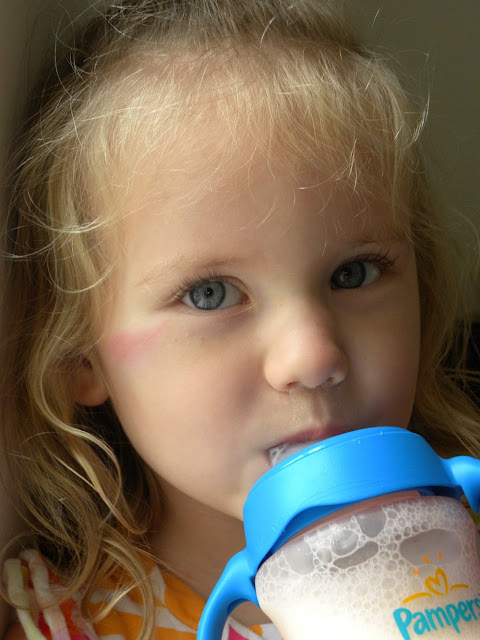 And since this is a Sadie picture I thought I'd add the latest variation of her favorite prayer.  She's getting a little more wordy:

Sadie and I also had a small misunderstanding after walking home from Mass on the Feast of the Immaculate Conception last week.  Since Sadie had tried to receive yet again, I tried to explain that in a few years she would be old enough to receive communion, and that when she was she'd get to wear a beautiful white dress and a veil.  When we got home she set out to find her angel dress.  And she found her veil.  Then she stomped around the house wearing it.

I have a feeling that this is her newest strategy in her attempt to convince us that she's old enough to receive the Eucharist.  I can't help but wonder what her next move in her campaign is going to be. 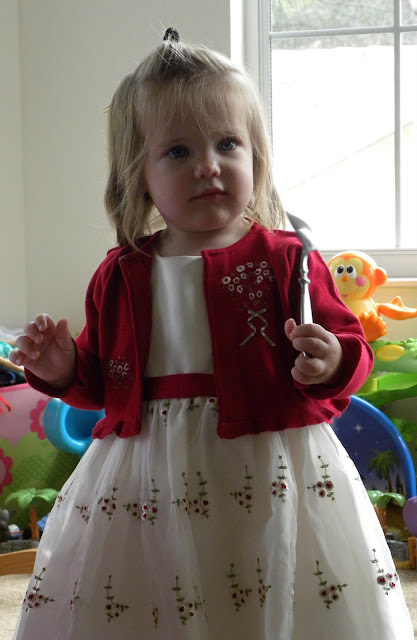 Then there's Mae Bae.  Don't let her sweet princess fluffiness in the above picture fool you like it did the Eucharistic minister (and me) at Mass on Sunday.  Some time after the window sill incident it was time to go up for communion.  For obvious reasons to long time readers of this blog, I'm a bit nervous when I go up to receive from a Eucharistic minister, because if there's going to be a tongue/hand incident it seems far more likely to happen in an... "extraordinary"... situation of that sort (although I'll be the first to say that I can see why this parish needed a giant flock of eucharistic ministers because it was huge and very, very crowded).

Anyways, I was holding Mae Bae and I opened my mouth, received the eucharist without incident and breathed a sigh of relief that there'd been no dropping or slipping... and Mae Bae lunged.  I barely caught her hands as she went for the shiny golden dish, while the eucharistic minister quickly slipped her hand over the plate.  It was a seriously close call.  So apparently I have two little ones with big plans as we go forward for communion. 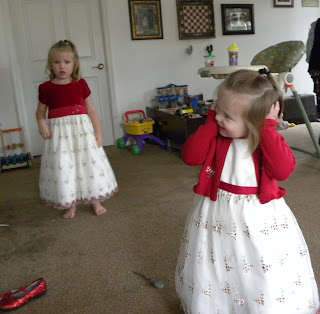 Now hopefully they don't start working together...
Posted by Cammie Diane at 9:39 PM