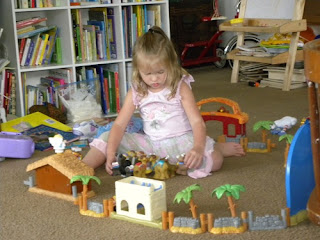 There's a little joke in our family that's been going around since Sadie's two year well baby checkup, when she cried when the doctor came in the room and he suggested that we put her in day care because she was clearly a shrinking violet.  He didn't believe that she could possibly remember the monthly appointments she'd had for ear infections for the first eighteen months of her life, which had pretty much convinced her that crossing the threshold of that office was the worst idea imaginable.  And so, whenever Sadie does something ridiculously extroverted, which is pretty frequent, there's often a comment from one family member or another about how it's a shame she's so shy.  It's not unusual for her to greet every preschooler we walk by, with an outgoing "Hi!" and she labels anyone who's about her size "friend!"  Occasionally, if she sees a little girl wearing pink she has to ask: "Are you a princess ballerina?"

The latest event has had my mom and I laughing on and off for the last few days.  Nani and Grumpa were visiting this past week, and while they were here we took the girls to the zoo.  While walking by the alligators, Sadie, who was a little nervous despite the double fence, announced that she wouldn't be looking at the alligators because she "didn't want to worry about it."  The day before we'd gone for a drive down Alligator Alley and I think she may have realized that the 26 alligators I counted from the car as we drove, live rather close to our current home.

As she ignored the alligators, so she wouldn't "worry about it" a mom with three very cute little boys walked by.  I'd guess that they were 2, 4 and 6.  Sadie, instantly smiled and said "Hi Guys!"  The little boys eyed her nervously (with good reason apparently, our biggest challenge has been explaining boundaries and having the concept stick, since Sadie still thinks everyone wants a hug or to hold hands since she thinks those are two of the greatest things ever...).  The next thing I knew she walked over and reached for the hand of the oldest boy, while saying: "Do you want to hold hands?!?!" in a little sing song voice, while he looked horrified by the idea and all the adults present tried not to laugh.  We managed to wrangle Sadie back over by the alligators, so the family could escape.

Poor Daddy didn't quite think the story was as humorous as I did.  I think he's already beginning to imagine the teenage years and I think he may already be wishing she were a little less extroverted!
Posted by Cammie Diane at 10:25 PM