Sadie's been begging me to wrestle Mae into her nun outfit.  She dreams of Mae peacefully praying beside her with their little Saint Therese and Saint Catherine dolls in their Carmelite and Dominican habits.  She's been asking me every single day, while looking like this: 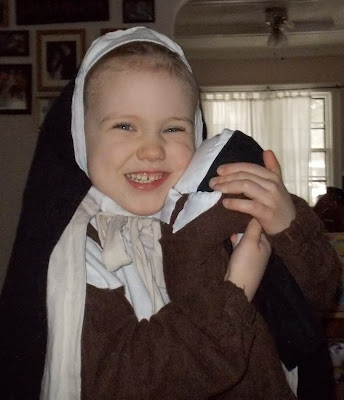 So I glance over at Mae Bae and see this: 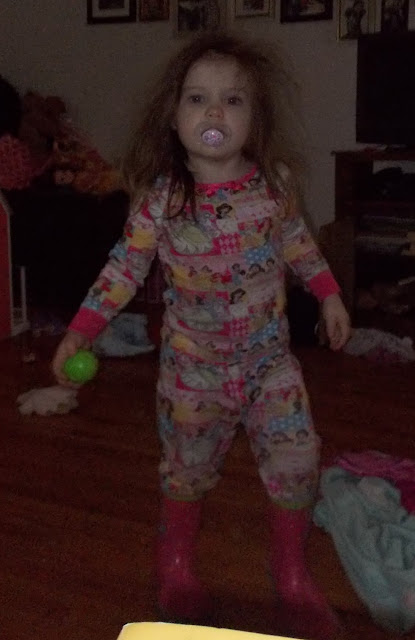 or sometimes even this: 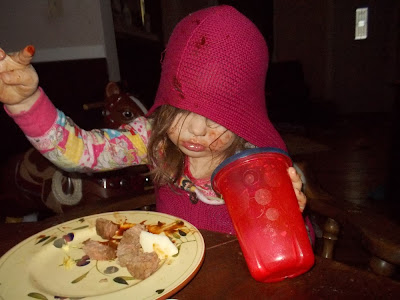 and I try to explain that I can't really make Mae play nuns.  I mean, I can just barely make the kid brush her teeth and wash her hair.

Sadie and I were given tickets to the Russian Ballet's Cinderella.  So we got dressed up (I made both of those dresses!) and headed out after bedtime last night.  First we snapped a picture without our jackets... 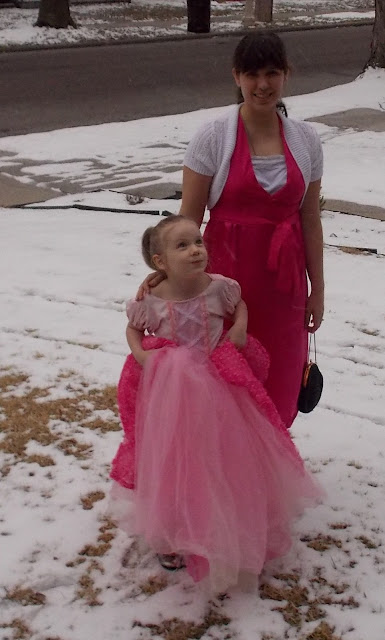 And then with our jackets on: 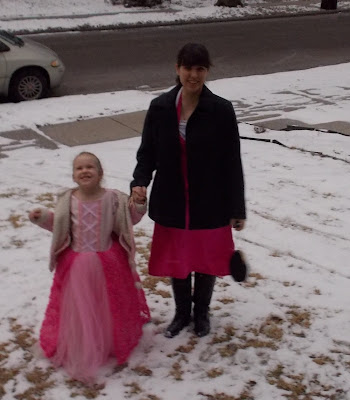 Sadie was so excited.  She had cried earlier in the day, when she realized she wasn't going to be dancing on stage.  But by the time she left she was happy again.

Once we got into our seats she hushed me every time I spoke (before the ballet started), taking to heart my instructions that she'd have to be very quiet once we got there, and apparently afraid that I was going to get us kicked out by answering the questions from the people around us about how old she was.

Then it started.  She spoke one time when the step sisters were whirling around Cinderella being mean and I heard her gasp:  "They're being so naughty!!!!"

I also had to explain that, while the mom on her other side was very nice, we don't just hold hands with people we don't know... and yes, even though she's a mom she does count as a "stranger."  Thankfully the mom was very, very nice about it!

She also clung to the program we got at intermission, and we also got the autographs of two of the dancers, although I think she might have been a little scared when we got close to the step mother for our autograph and saw the hair on "her" chest since the roll was danced by a male dancer.

And on our way out she seemed not at all surprised when a group of women asked in heavily accented English if I would take their picture with her.  Because apparently "Princess Ballerina Nuns" are used to that sort of thing.

Patrick thought that yesterday was pretty much the best day ever.  No, he's not yet eating food.  But I did move the high chair back upstairs so that he could sit in it at dinner time.  He's been hollering to be held at the table while we eat, certain that he's being left out of something very important, so the chair came up and was adjusted and he happily sat in it during lunch and dinner yesterday.

When Paul took a bit of his dinner Patrick did kick his little legs and open his mouth hopefully... but not yet kid.  You've still got a couple of months to go. 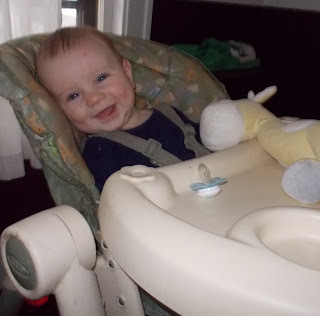 He is getting difficult to dress.  His length puts him in size 12 months.  His chest and shoulders can't be squeezed into his 9 month outfits.  But his weight puts him at 3-6 months around his waist.  So pants don't really stay up on him if they're actually long enough for him.  He really is my little string bean!

I might have to start sewing and taking in his baby clothes... or at least putting in some temporary seams so his pants don't fall off.

Here are a few more of the quilts I'm working on.  My favorites are the first and the third!  I am a quilt making machine!  Last night my eyes were so sleepy by the time I put my sewing machine away they were just barely staying open:

I've been perfecting my gluten free egg free pizza crust recipe.  I've been making it once a week as a special treat.  It got the thumbs up from everybody in the house.  And it makes me miss pizza a little bit less. 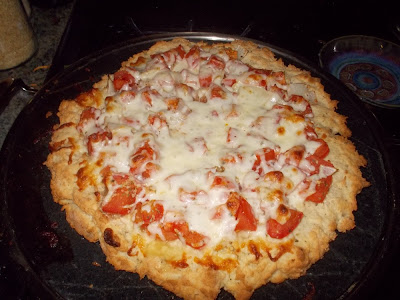 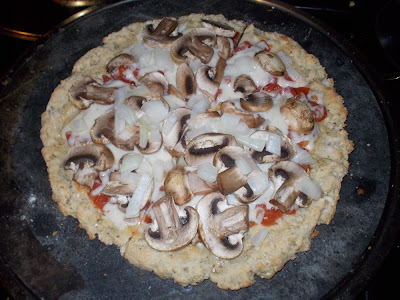 Oh yes folks, she is a climber.  And this time I caught her in the act:

An early birthday present yogurt maker arrived at my house yesterday!  I'm so excited to try it out!

Does anyone have any yogurt recipes that they love?

For more Quick Takes, visit Conversion Diary!
Posted by Cammie Diane at 9:36 AM