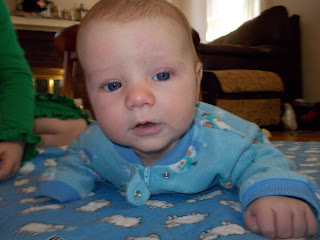 Yesterday I was stalking EWTN's live stream on Roku, after giving up completely on doing anything constructive during the day, other than repeatedly pointing out that we were "watching history" and happily viewing the goings on at the Vatican.  At least that was my plan for the morning.

When I turned on the program it was still a little over an hour away from the start of the coverage of the procession of the cardinals, and a dark haired young priest was reading the gospel and giving a homily. Sadie looked at Patrick then looked at the TV and announced:  "He looks like Patrick!"  She paused and looked back and forth between them again before adding:  "I mean, other than the hair.  His hair's different!"

Ah, yes, other than the hair.  Your brother is practically bald (although if it were a friar with a tonsure she might have been on to something, because he does kind of have a little ring of hair around his head that is just beginning to fill in).  And other than the thirty years some year difference in ages.  And the fact that Patrick is still too little to sit up.

"What do you think reminds you of Patrick?"  I finally asked when the internal giggling stopped.

"Jesus."  She said, very seriously, finally clarifying that it was because Patrick loves Jesus too.  Then she went back to playing with her dolls.

Poor Patrick is getting quite the religious education from his big sister.  She takes his little hand and makes him cross himself.  She's been trying to get him to say grace and the guardian angel prayer.

She's heard me say: "Can you say _____, Maggie?" to Mae enough times that she'll recite part of prayer and then say "Can you say, Angel of God, my guardian dear, Patrick?  Can you say it?" or something like that over and over again while he gazes at her adoringly, or looks at me like "can you please rescue me!  I've had enough!!!"

Now to go wait for the smoke... and the dishwasher repair man... and see whatever gems Sadie comes up with while we await the election of the new Pope!
Posted by Cammie Diane at 9:00 AM

Email ThisBlogThis!Share to TwitterShare to FacebookShare to Pinterest
Labels: Pope