What I Wore Sunday: In Which I Ramble Quite a Bit About All Sorts of Things

I'm learning that it's pretty much impossible to get a picture by myself these days.  I think I might win the prize for "least clear WIWS pictures).  But I tried.  Oh did I try.

In the first one Paul took (which is not here) I'm asking Sadie what's wrong.  In the second one (also not here because it's equally horrendous) my mouth is open because I was asking her why she'd just burst into tears.  And in the third one (yup, it didn't make the cut either)  I just look stressed because there's a crying four year old in front of me, sobbing because she's not in the picture.

So I picked her up. And she got to be in the picture with me, holding tightly to my scapular.

The funny thing is, my worn, falling apart scapular has become like a lovey for each of my kids.  All three of them go straight for the cord and pull it out of my shirt and hold it in their hands when I'm sitting with them or cuddling them.  It calmed Sadie down today... and even Mae came over to get in on the picture action:

See the apples all around us?  We have an apple problem.  The kids are crazy about them.  Green apples are their favorite this week, but it rotates and seems to be whatever it wasn't the previous week:

Why yes I do feel strong looking at the one below this text.  That's roughly 80 lbs of babies in my arms.  Now quick, before I get distracted...

I made the dress out of fabric I bought at a yard sale around the time Paul and I got married (so around summer 2006).  It was something like 25 cents a yard.  The sweater was around $5, and I believe I got it at JCPenny's in Butte Montana when we went out there for one of my best friend's wedding.  The belt came on a clearance sweater that I found at Macy's when we were visiting Massachusetts and I had a gift card this past Christmas.  The boots are my Kohl's boots, and after wearing them 16 hours a day, every day for the past two months they're starting to look old.  Although they'll still be "my new boots" for at least two more years, because I tend to think of things as "new" for the first three years or so.

The snood is from my store.  I wasn't going to wear a snood this morning until I realized we were running late and I hadn't brushed my hair... and then it was a lifesaver: 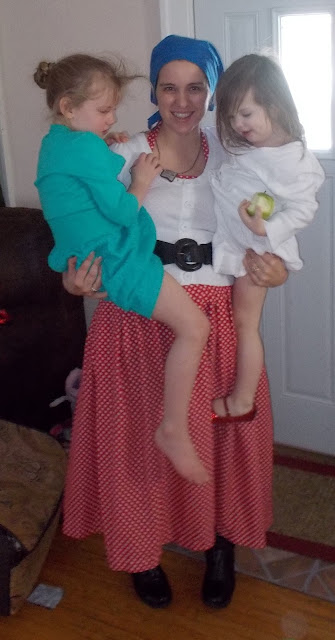 Both of the girls are in outfits Nani and Grumpa gave them from Old Navy.  I love the eyelet dresses I'm seeing this year.  And the girls were super excited about their new dresses.  And of course Mae was even more excited about her cardigan.  She cried when I had them change after Mass to eat lunch.

Sadie is four years old and I have to say, she's starting to make me feel short.  I'm 5'5"... and I think she's going to be taller than me in a fairly short amount of time.  I hope I at least have six more years... but looking at this picture I'm not sure that I do.  Apparently we're raising giants: 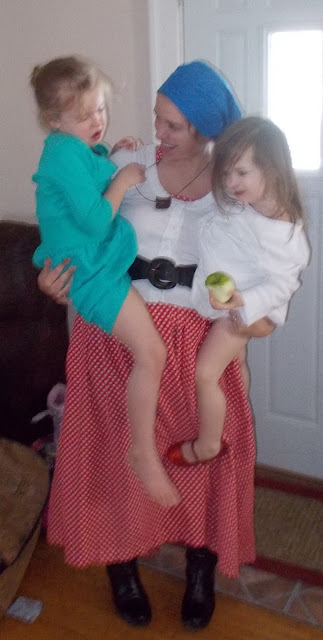 And here's what the little man wore, complete with dress shoes that Nani and Grumpa got him at Payless shoes (which also happen to be where Mae's shoes came from).  It's his name day, and so I'm thinking of making ice cream, that he wouldn't be able to eat since he's too little... while I'm ignoring the doctor's packet that told me I can start giving him juice in a bottle this month.  He's still not having anything other than plain old mom's milk.  I'm also ignoring the advice that says that he needs to be drinking from a bottle right now.  The packets they give me make me laugh... at least until I think about how many moms probably think they're gospel and that you do have to do these things because the doctor said so and follow them... I really do not like the idea of giving apple juice at four months: 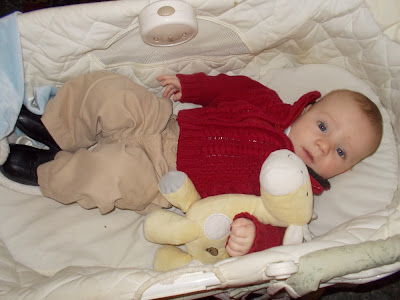 Peekaboo.  He loves his bunnies and his giraffe.  Especially that giraffe.  He gets so excited when he sees it, and kicks his legs and smiles: 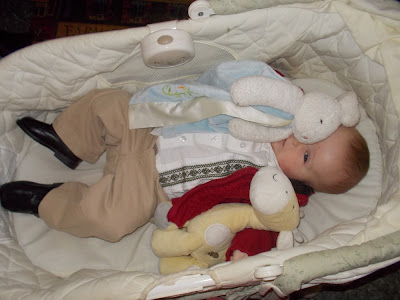 And here's his outfit.  The shirt and pants are courtesy Nani and Grumpa's early Easter present.  His sweater was super sale at Once Upon a Child in Naples, Florida. 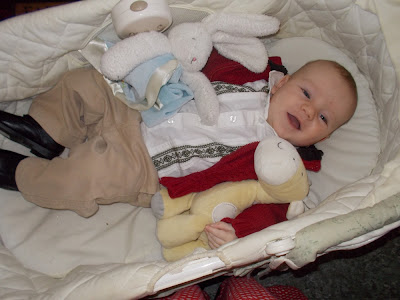 And since I completely forgot that it was Saint Patrick's Day while I was picking out outfits, Paul is the only person here who represented the family's Irish heritage today.

We did have to pick up a chicken for dinner, and drove along the edge of the University where things were hopping.

I smiled when I saw a happy young man skipping down the street.  After a moment at a stoplight I wondered briefly if he was sober, before the question was answered for me as he tripped over his own feet and skidded down the sidewalk and bounced up with the help of other students, thankfully unhurt.  It was lunch time and things were already looking a little crazy over there. 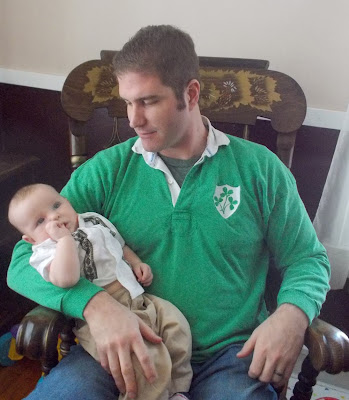 And here we are after Mass.  The Moby still covers up most of my outfit, but today I was smart and didn't get dressed until after Patrick had gotten sick twice and we were just walking out the door(that's another story about why I should never say that I've "figured out everything he's allergic to" because then we find out something new, like we did yesterday, and he's sick for two days and it is not fun). 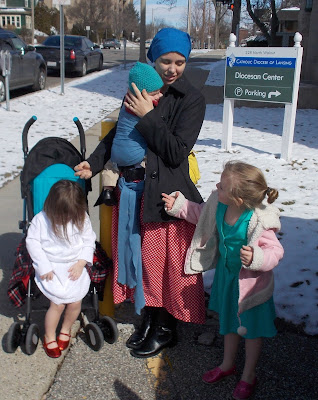 Who's ready for spring? 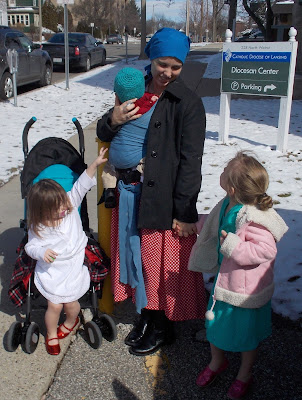 Wow, I was exceptionally rambl-y today.  Sorry about that!

Join the What I Wore Sunday Linkup or check out the other lovely posts here.
Posted by Cammie Diane at 5:13 PM