Sadie's Dreams of a Convent

I have to start by saying, that Sadie surprises me on a daily basis when this topic comes up.  I don't know why it surprises me (I guess because she's so little), it shouldn't at this point, but still it does.  When we play school we usually spend about fifteen minutes either with a little kids Bible or with some of our saint books.  A few times a week, outside of family prayer time, we practice prayers.  It's nothing extraordinary.  So I really don't feel like her passion is the result of anything we've "done" other than maybe going to Mass and praying together... (as a disclaimer, because I want to share what she's been saying of late, because she amazes me and I want to write it down):

Sadie has renewed zeal when it comes to her "nun phase" (which began shortly before she turned three and doesn't seem to be tapering off just yet) after announcing last week that "I want to be a ballerina, and then when I grow up, a nun."  It's become a huge part of conversation in the house, as she peppers me with questions for hours at a time (I seriously need to start reading up on orders just to answer them all for her).

The other day we began talking about all the jobs that nuns and sisters can do.  She looked downright gloomy until I said:  "And some go away from the world and pray..." at which point she completely lit up and said:  "That!  That!  That's what I want to do!  I want to go away from the world and pray!" which is odd to hear her say, since she's the most extroverted person I've ever met in my entire life, going up to random little kids she sees and saying:  "Hi!  My name is Sadie Kathleen.  I'm four and a half... What's your name?"

She's also decided that "Mae Bae should be a missionary nun" and corrects me when I call Patrick "My little boy" by saying "You mean, My Little Priest."  Poor Patrick is in a Sadie run catechism that involves his sister desperately trying to teach him how to make the sign of the cross and say his prayers.

The other day I heard her, sitting beside Mae and Patrick say: "In the beginning God made the world.  He made Adam.  He made Eve.  Eve went walking in the garden.  She saw the fruit tree.  She saw the snake.  I wouldn't want to be up high in the tree like that.  The snake said the fruit would make them like God.  God came walking in the garden.  They had to leave.  He put two angels in front of the garden to guard it.  They could never go back.  Do you know the angels names Mommy? No? And after that everything changed and people did bad things."

I really, really wanted to run across the room and grab my tape recorder and record her story, but I was afraid that if I did she'd become self conscious about it and it would ruin to sibling cuteness that was going on.

I also feel like I owe the compilers of the Catholic Children's Treasure Box a huge debt of gratitude because many of the stories in the series involve children helping their parents without being asked, and yesterday Sadie came over and asked me if she could wash the walls (I was scrubbing crayon marks from a red crayon that the two year old has somehow pilfered) for me, so that she could help and be more like Mary.  So if anyone wants to know what we read, mainly it's that.

Other phrases, such as, "Mommy can we play Church?" have surprised me of late.  And I know I'll be in trouble this morning, because I didn't get around to washing a teeny tiny stain out of her brown Carmelite dress, after specific instructions before bed time to please not forget (it'll be going straight into the next load this morning, but I don't dare to hope that will be before anyone notices).

The above mentioned request to play "Church" might be why she's suddenly eager to think of her little brother as a priest, because without ever really talking about it, Sadie understands something that some adults struggle with... namely that men and women are called to different vocations in the Church (as an aside, do you know I heard the phrase "shatter the stain glass ceiling" the other day while the question was being raised as to whether their would be womyn priests now.  I'm serious.  I did and I can't help but think: worst phrase ever.).

This came up recently when we were watching the cardinals file in before the conclave and I said: "Oh, I wish I could  be there!" meaning, in Rome while all this was going on.  Sadie looked at me and shook her little head before saying:  "Mommy,  You cannot be there.  You are a girl.  Only boys are allowed to be there!" before gesturing to the room on the TV.  Her little words conveyed horror that I would express such a wish.  She usually follows such statements with:  "and I will be a nun someday!" 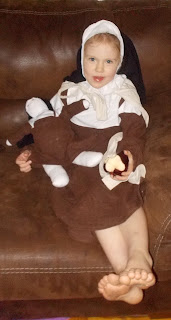 And while she still loves Saint Therese, she's fascinated at the moment with Saint Bernadette.  "Mommy, I have an ouchy like Saint Bernadette!" she told me excitedly after I put a band-aid on a small scrap on her hand.  She begs to watch Song of Bernadette, and would watch the three hour film every single day if I let her.

Which leads me to the times when I feel a catch in my throat when she talks about wanting to be a saint with all her heart and asks if I will miss her when she's a saint, and I try to say in a jokingly tone that it better be years and years before she goes anywhere.

So I continue to watch and be surprised on a daily basis with what she comes up with and wonder if it is a phase, or if it truly is a lasting vocation that she's somehow heard at such a young age.  And a couple times a year I write about it here so that she can read about it someday, no matter what path she chooses and smile at the little girl dreams of "going away to pray for the world."

Oh and can you guess what her latest request is?  A nun habit like the ones in Song of Bernadette...  I'm perfecting my habit making skills little by little each year with Sadie's help.
Posted by Cammie Diane at 10:25 AM