After getting dressed this morning I thought of writing this post and my first thought was:  "Quick, someone get a camera, before something happens." And then, whoosh... it was too late.

Long story short (if I'm even capable of that), due to the unfortunate fact that Patrick appears to be quite allergic to his stupid vitamin d drops (because apparently we have to put "artificial colors and flavors" in everything) I ended up having to give him a colloidal oatmeal bath this morning in the sink, after I was dressed, along with applying copious amounts of cortisone and eczema lotion.  Despite my handy towel apron the effort doomed my dress to some sort of accident, which, unsuprisingly took the form of a large colloidal oatmeal water spot across he front of the dress.

I believe it occurred around the time the toddler saw me with my hands full and reached between my nearly fool proof double baby gate system and undid the latch... and then dashed down the stairs to the basement to attempt to eat the wheat and peanut butter cookies that she's seen in the donate box.

It's okay, I thought and I quickly finished the baby bath and rescued Mae from her own mischievous intentions.  The moby wrap will cover it.  The moby wrap covers a lot.

Moments later outfit accident #2 (which would be total incident #3 of the morning, the first involving a toddler, a baby gate breech, the toilet and my tooth brush) occurred and I had baby milk dripped across the neckline of the outfit.  The thought of the moby wrap calmed me for a second time.  Then Paul finally snapped a picture:

This is this mornings dress, before I found my cami-secret, although the cami-secret didn't matter all the much since, again, the moby wrap covers my entire front upper half.  I made this dress last year right around the time I found out I was expecting Patrick, and almost immediately couldn't fit into it.

Mae Bae usually wears a dress to Mass...  This morning after going down to the basement, getting the dress and coming back upstairs with the kid outfits and finding out hers was missing, I decided to go with what we had on hand upstairs.  And of course, she matched in her red and black jacket (at this point I was just waiting for the next fashion disaster to occur).

She's at that phase where, no matter what I dress her in, and no matter how carefully I clean her up and comb her hair, she always looks kind of wild and disheveled.

I paired my  dress with one of my new solid colored snoods that I made last week and a jacket that I vaguely remember buying at Old Navy and then obsessing over, back in Spring 2005.  Was it too loud?  I remember asking myself and my friends repeatedly.  Obviously I had way more time to worry about that sort of thing back then.  Now it's one of my spring favorites because wearing it makes me feel like winter is almost over!

And of course there are my black-there's-still-snow-on-the-ground-between-giant-puddle-boots: 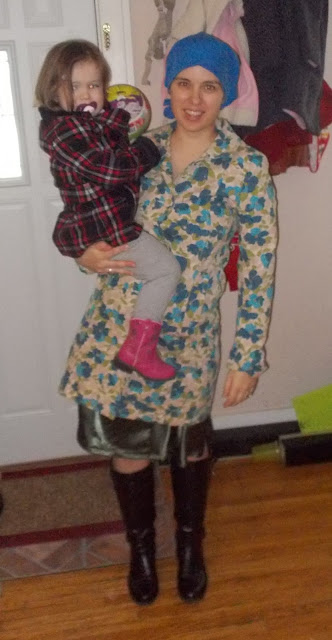 And here's how we actually looked leaving Mass (after incident #4 which involved Mae Bae smuggling her bouncy ball into Mass, and Paul and I not noticing until we were actually inside the door as she took evasive action and hucked it down the stairs...). 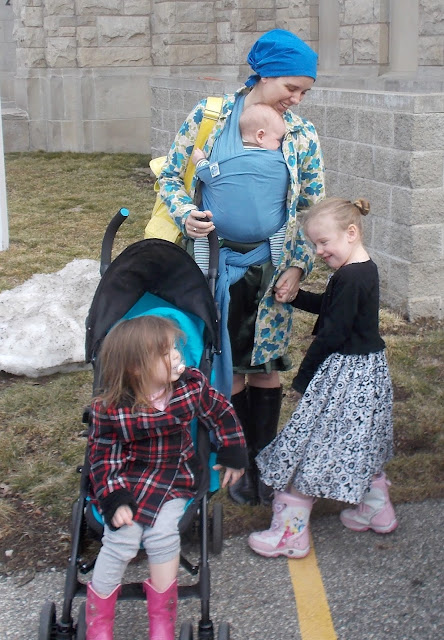 And here's what The Boy wore.  I usually dress him up for Mass, but in the rush of the various "what else can go wrong" and figuring that he's actually completely covered by the moby too, and probably more than a little itchy at the moment, I opted to let him wear a sleeper. 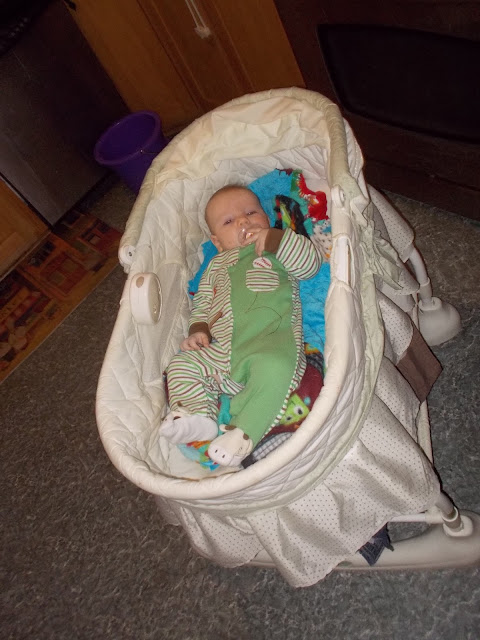 Head over here to check out the other WIWS posts or join the link up party!
Posted by Cammie Diane at 2:44 PM