What I Wore Sunday: The Crazy Toddler In the Moby Wrap Edition

Well.  Today wasn't a disaster.  No one spit up on me.  I actually made it home without a single stain.  That might be some sort of Palm Sunday miracle in these parts.  So here's my outfit.

The dress, is my all time favorite dress.  I bought it to wear when we left our wedding back in September '06, at Macy's.  It's an awesome dress.  I wore it when I was 20 lbs lighter and I've worn it when I was over 20 weeks pregnant.  It's an A-line and it's amazing-ness is in being so wearable at so many different body-type stages, and because I love the fabric.

The sweater is from JCPenny's if I remember correctly, around the time I was pregnant with Mae.  And of course, my Kohl's boots, because there's still a teensy bit of snow on the ground, and I'm a wimp. 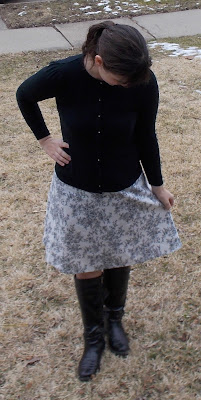 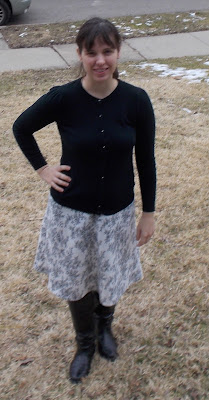 Sadie was very, very excited this morning.  One of the Knights just gave her a tootsie roll.

She's wearing the pink Christmas dress that she picked out to wear for Christmas when Nani took her shopping back in October, and her "we're moving to Michigan and it's going to be colder there and we don't have any cold clothing" cardigan that we bought the day before we left Florida.  And she has on her brand new silver ballet flats from Payless Shoes, because she's officially outgrown her size 12s so I took her shoe shopping.  I am so thankful for Payless and their $7-$12 shoes. 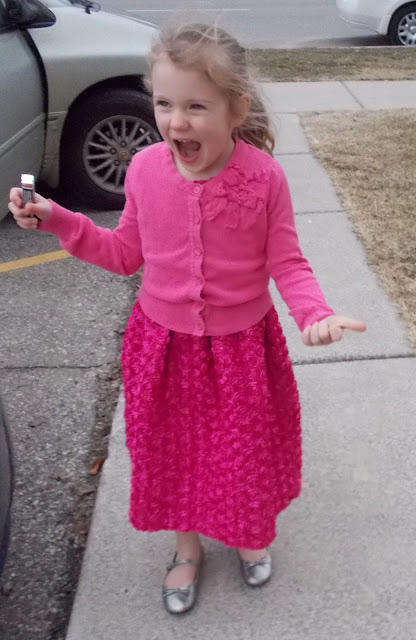 Mae giving me a "No pictures Ma" look.

We started out making an effort to match, but once we threw in the shoes the outfit went off the tracks.

The opinionated two year old is wearing my first day of kindergarten outfit, a hand me down sweater (from Target?) from Sadie, and a pair of purple pants that I think Nani gave her (side note: do you know how sad I am that this part of Michigan doesn't have a Costco anywhere near us?  That's where like 75% of our clothes came before we moved!).

And of course she's rocking her shiny red boots.

Let me tell you about those boots and my morning.  I started to get Mae dressed.  There were hysterics. You see, the boots were already on, over her footed sleeper.  And we had to take them off to put on her other pants.  There were tears.  There were also tears because she wanted to put the cardigan on before the dress.  And then she was sure I was going to forget about it.  Oh to be two.  It's a tough life.

There were also tears during Mass because she kept looking down at her boots to make sure they hadn't come untied, and there were hysteric once when it looked like one lace was longer than the other, which made her think that it might be coming untied, or at the very least wasn't perfect.  And just wait until you see today's Mass arrangement.  Because we tried something new.

Last, but not least, there's Patrick.  We'll start with his shoes.  They're from the local second hand store. Patrick is our first baby who's really worn shoes, being as he's our first winter baby, and we're in Michigan in winter now, rather than California or Florida in summer.  So I have a whole new appreciation for baby shoes: 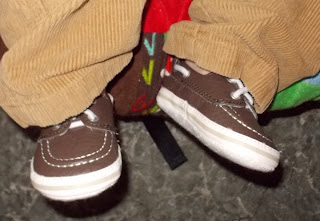 He was hysterically crying until I took out the camera.  Then he smiled.

He's wearing a hat that I made, with an outfit entirely from the second hand store.  I think altogether that would make $8-$9, which isn't bad for a Lacoste Sweater, Green Babies pants and a button up shirt.  I like to have a little outfit that fits to dress him up for Mass, but have found it hard to find little inexpensive Church clothes, so I was happy when I found these: 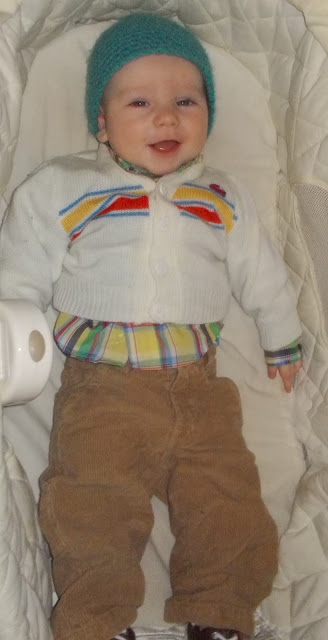 Now for the set up.  Mae is in the typical two year old it's hard to stay still during Mass phase.  Paul usually wrangles her and I take Patrick.  Today I set Paul up with the other wrap and Patrick, and I took Mae in the Moby.  I'm pretty sure we exceeded the weight limit.  But it worked.  There was no way I could lift her anyways, for over an hour.  And she liked the cuddle time.

I'd sat compared to the other two year old her grade for the day would be... a D.  Maybe a C.  But most of her antics were quiet, like trying to force me to eat the palm frond I'd grabbed on our way in.  And compared to a normal Sunday (for her)?  I think she got a solid B.  There's still a ton of room for improvement, but much, much better than usual.

She did enjoy the cuddles.  And I got a super workout.  I stood in the back almost the entire time. I think I sat for a total of 2 (or less) minutes:

My knee caps were a little sore from where her boots hit by the time Mass was over!  And my shoulders!  But it was definitely worth it.  And Mae got a little extra cuddle time!

And here we are after Mass (I wore my blue convertible headcovering).

Two out of three smiling is a victory in the Wollner house! 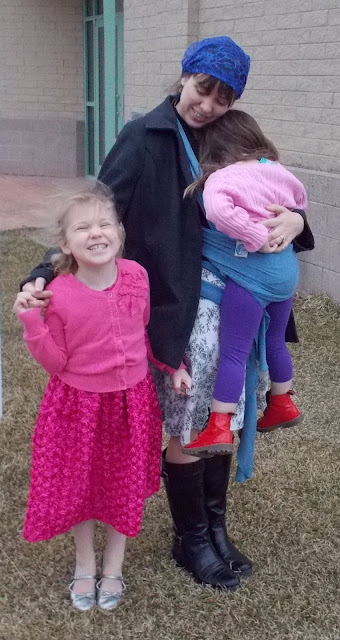 I hope you had a lovely Sunday!  To see more What I Wore Sunday posts or to join in the link up fun head over to Fine Linen and Purple for the Link Up Party!
Posted by Cammie Diane at 2:36 PM