What I Wore Sunday (1st Edition!)

I've thought about joining the What I Wore Sunday linkup for a while, but I was never organized enough to get a picture of my outfit early enough in the day to not look like a mess.  Last week it was an unfortunate incident involving my clothes and rice flour that eliminated the possibility.  This morning we were actually running ahead of time for once, and the camera was on hand and I remembered to have Paul take a picture!  And this is what I wore to Church today: 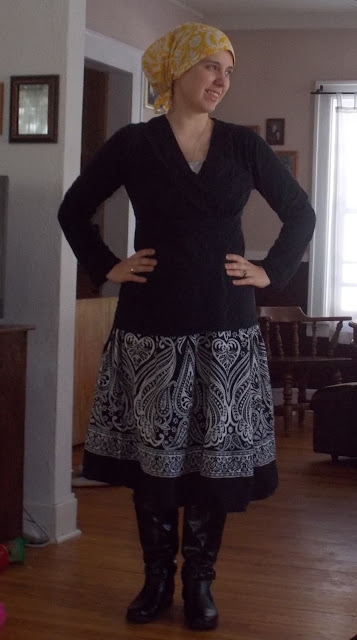 From head to toe:

I wore my favorite yellow cotton snood.  It makes me feel so happy and springy when I wear it.  And it matches my giant yellow diaper bag.

My shirt is a nursing top from motherhood maternity.  It's lasted through three babies now and is still a favorite mostly because it's so comfortable.  A cami secret snap on cover makes the v-neck not quite so low so I'm not constantly tugging at it.

The skirt is one I picked up when we were driving cross country.  I found it for less than $10 (I think it was $6) at Ross in El Paso.  It fits when I'm pregnant and when I'm not, which makes it a pretty fantastic piece of clothing.  It is considerably longer now that my stomach is closer to it's former width.

The boots are from Kohl's.  These boots have made life much, much easier.  They aren't as clunky as my snow boots, which feel kind of clunky anytime I'm indoors (especially at Mass).  I disliked wearing the snow boots so much that I'd slip and slide and freeze, so these are a nice, warm compromise.

Also part of the outfit are  navy blue stretch pants that totally don't match, but that can't be seen and that do a pretty good job keeping me warm (and guess what, good news!  It's supposed to be 33 degrees tomorrow!  That's above freezing!  It's practically a heat wave!  Could this mean that spring is upon us?).  And I wore super thick navy blue and yellow rugby socks... which are also exceptinally warm (and hidden under my boots).

And so that is what I wore today to Mass, during the surprising hour when I found myself mouthing things to a certain child in my family like:  "Don't lick the chair in front of you!  No! Don't lick anything.  That includes my hand.  Don't drool on my hand either.  And no, don't drool on the arm of my chair and then stick my hand in the drool."  Sigh.  It totally wasn't the child you would expect either.

On a slightly different note, I got quite a bit of sewing done tonight and even used a bit of "extra" fabric to make a quick skirt.  It might be part of next weeks outfit.  It was a quick, simple project (I finished four projects tonight, so I'm back on track) and I'm happy with how it turned out:

Now to get some rest!  It's practically Monday already!
Posted by Cammie Diane at 11:37 PM