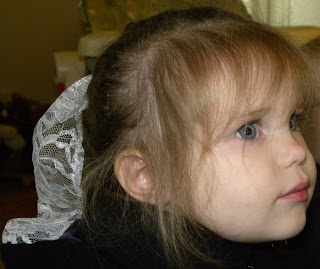 The past two nights I feel like I've been working in slow motion, getting very little done.  I'm not sure exactly what's going on.  I sit down and sew for three hours and look up and have finished one project and have two more orders partially finished and where did two of those three hours go?  I'm baffled.  Tonight I need to pick it up a bit so that I can send out tomorrow mornings' batch of orders bright and early!

I am, however, pleased with the efficiency so far of this morning, since I have a turkey that was in the oven at 7 am, while not a single baby was having a tantrum or crying.

Since Lent has started I've been making an effort to make meals on Sunday extra special.  You see, we usually eat at least dinner as a family.

Sometimes on the days when Paul has class through dinner time I'll make something that can easily be eaten away from the table.  Pre-new-diet waffles were a big hit (syrup-less... I'm not that crazy!).  But Sadie's always slightly confused on these days, and after eating two waffles and handfuls of fruit she would shake her head when I informed her that bedtime had arrived and tell me in a worrying voice that I'd forgotten about dinner.  "You've already eaten," I remind her.  "Remember?  You had two waffles and some cheese and an apple and four strawberries and a glass of milk.  Are you hungry?"  "Well no... but we didn't sit down at the table!" 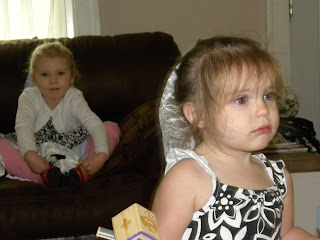 Perhaps it's just a bedtime delaying attempt, but I think it's something more.  The kids see dinner time as an unmovable part of the day and dinner just isn't dinner if we haven't sat down at the table.

Anyways lately, as I'd begun to say before I got distracted by the bedtime delaying antics of the four year old, I've been attempting to make Sunday's stand out from the rest of the week in little ways in addition to going to Mass.  For the past few weeks I've made sure that we had a chicken to roast.  I try to get one that's large enough that I'll be able to get several meals out of it.

On Sunday morning I prepare it and put it in the oven and when we get back from Mass down the street the whole house smells of chicken and garlic and onion.  I prepare the sweet potatoes before we leave and pop them into the oven when we get home and before long we're all sitting down to a Sunday lunch that just feels extra special, because for some reason there's something about pulling a whole bird from the oven that feels like a holiday to me. 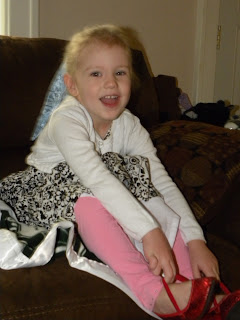 Sunday night I make broth for the week, and hopefully make at least two meals out of the leftover chicken.  And after reading Charlotte's post a while back I tried extra boiling until more water had evaporated and loved how the stock was gelatinous once it cooled (and I made an awesome cheese sauce with it this week while basking in the fact that this cheese sauce was made with homemade broth!).  It really had very little in common with the stock that I used to get when I bought it at the store in a little box.

Yesterday morning I realized that I was chicken-less.  I went down to the basement freezer and pulled out the turkey that I had squirreled away and put it on top of the freezer in it's bag, hoping that it would defrost by this morning.  This will be a turkey week.  It feels extra holiday-y.  I might have to do something with green beans and cranberry sauce!

I'm not entirely sure that these meals are more popular than our Florida tradition of doughnuts and pizza  on Sundays for lunch, but they are certainly friendlier to the new diet!


Do you have any special way you set Sunday apart from the rest of the week?
Posted by Cammie Diane at 8:20 AM