I've been steadily working to come up with occasional treats that are compatible with our new diet.  I'd been longing for something chocolate-y to bake for a while now and last night I finally came up with an idea.

Now I love shortbread.  I especially love that shortbread is one of those foods that actually tastes better with rice flour than it does with wheat flour (in my opinion at least!).

I expected the girls to love it, but I didn't think Paul would be a huge fan because he's not quite as chocolate crazy as the rest of us are.  I made a batch of my regular shortbread and gave everyone a piece of each to compare.

And Paul... well.. he shocked me by preferring the chocolate (by a tiny margin) to the regular shortbread.  He had to try each type twice to be sure.

And so I knew that had to share my new gluten free chocolate shortbread recipe here!  I hope you like it as much as we do! 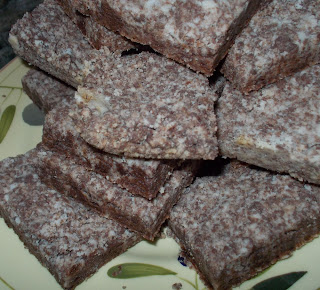 Combine softened butter and sugar with a mixer (I use a handheld mixer).  Add vanilla and mix and then rice flour and mix well.   Lastly spoon the mostly melted chocolate chips into the mixture and mix completely.

Next pour the entire mixture into a baking pan and bake for 10-12 minutes at 350 degrees.

I'm linking up with New Recipe Tuesday one day late!
Posted by Cammie Diane at 8:17 AM