Each week I'm slightly more shocked by how much this diet change seems to have effected every single member of the family.  When we went in to talk to the doctor about Patrick's allergies the first time I remember telling the nurse that I had to use my rescue inhaler every single day.  In the past two weeks I haven't used it at all.  And my migraines seem to be disappearing as well.

Mae is cuddlier and much less destructive.  She still loves climbing and dancing on the table when she can get away with it, but she just doesn't seem to have her little heart set on destruction the way she used to.  And when I tell her no she actually listens to me about 75% of the time, instead of... not at all.

Sadie told me yesterday that her "tummy used to hurt a lot when I ate sometimes."  It was just volunteered information out of the blue and it caught me completely by surprise (I'm not really sure why at this point).

And Paul reports back from my pestering questions that even the limited sleep he gets after staying up most of the night studying is more restful.

I've begun the wheat clean up of the house... and I have to say about three quarters of our food is going to need to be donated somewhere.  So many non-wheat-seeming foods have wheat in them.  I continue to find little surprises here and there as I read each label.

I want a cow.  A miniature cow.  Or a giant highland cow, since they're so cute and furry.

I know, I know.  We practically live downtown.  We're a block from the main street.  Not exactly prime cow raising real estate.

But have you seen this?

The FDA is considering allowing aspartame in milk (and 17 milk products) WITHOUT A LABEL.  And since every single thing I've read by the FDA makes me feel like they want to make out with aspartame (I know, I know, not feeling particularly mature about this particular subject at the moment) I don't feel really great about the odds of them saying no are stellar.  Because when I first realized that it was diet anything that made me feel like I was having a stroke (numbness, slurring, feeling drunk after drinking a bottle of flavored water) I started researching and could find nothing but warm fuzzies and "some people say aspartame makes them sick, but our studies show it's just the greatest" from FDA websites.

Um... yeah... having accidentally ingested aspartame and first hand experienced the effects multiple times I can say: No.  And without a label?  No times infinity.  What's wrong with these people?

I have a feeling the answer to that question is green and fits perfectly in a wallet...

After watching EWTN yesterday Sadie began to beg that I go down into the basement and find her "Marie Therese" outfit.  I told her when Daddy got home in a few hours I would look for it, and was surprised when she started jumping up and down when Cabrini pulled into the driveway.  After all, he'd only been gone for a few hours.  Then she looked at me and said: "Now you can go look for my nun outfit!" happily and I realized the cause for the celebration, which I'd completely forgotten about in the preceding hours.

So of course, I had to snap a picture: 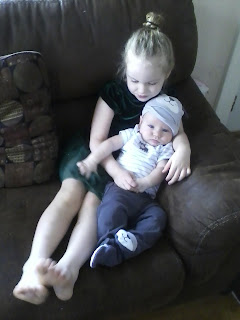 Paul came home late last night to find Patrick and I siting on the couch together watching Sabrina (with Humphrey Bogart and Audrey Hepburn).  Patrick usually wakes up sometime between ten and midnight and nurses and then goes back to sleep.

But last night he heard the voices of the old movie (usually when he wakes up I am watching something while I sew) and couldn't take his eyes off the old black white film playing on the screen.  He sat on my lap and watched sleepily, determined to stay awake (something that's happening more and more... when he watches his sisters play he'll struggle not to sleep also).

And I let him because he's a little cuddle bug and I was too tired to sew another stitch by then.

He slept until after eight this morning as a result! 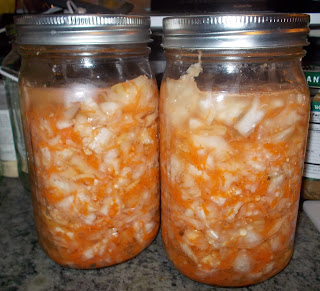 Jalapeno Garlic Sauerkraut!  After days of nervously following instructions that included "pick the mold off the top daily" we had success!  Delicious success!

I've been trucking along making new recipes lately (can you tell there's a preoccupation with food as I try to figure out what can and can't be eaten... I know it's coming through in this food laden post...).  I came up with a shepherds pie with pulled pork, red pepper and sweet potatoes and a beef broccoli that tasted surprisingly like stir fries I've had in the past.  Yup, while life is beginning to get back to normal after a month of using nothing but whole foods to cook, I'm still a little preoccupied with "what else can I possibly make that doesn't involve wheat or eggs or potatoes..." 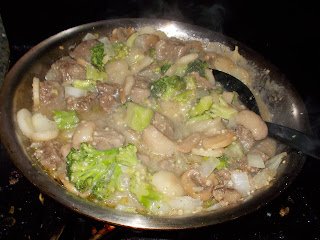 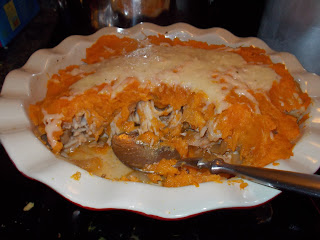 Now that yesterday is behind us I'm ready to be excited about the conclave!

And have you entered the fantasy conclave yet?  LOL!  There are prizes!

For more Quick Takes, visit Conversion Diary!
Posted by Cammie Diane at 9:42 AM