Down the Rabbit Hole...

I find myself increasingly baffled by my friends who still think that Barack Obama is a good president and who post little "isn't he awesome" memes on facebook, that basically praise him for standing up to those big mean conservatives on fiscal issues.  I love you guys, but as these most recent months slip by since the reelection I find myself increasingly confused that anyone could be excited about the unrelenting one way encroachment on basic liberties that we've seen, week after week.

Now let me say that while my political views most certainly fall on the conservative side, I'm also not the Republican parties greatest cheerleader.  I'm a Republican, but I disagree with the party line quite a bit.  But when it comes down to it, when I have to choose between one of the two parties that will be elected, the choice, for me, is easy.

In the past I've voted Republican because I choose the party that wouldn't allow an unborn child to be torn apart limb by limb in his or her mother's womb.  I don't think that that basic protection to life is trumped by any other right (and yes, I'm also against the death penalty).

Today, however, further cements the line between these two parties when it comes to your right to take your next breath.  Because the White House believes that it can act as judge, jury and executioner and decide who lives and dies:


“When I asked the president, ‘Can you kill an American on American soil?’ it should have been an easy answer. It’s an easy question. It should have been a resounding and unequivocal, ‘No.’ The president’s response? He hasn’t killed anyone yet. We’re supposed to be comforted by that. The president says, ‘I haven’t killed anyone yet.’ He goes on to say, ‘And I have no intention of killing Americans. But I might.’ Is that enough? Are we satisfied by that? Are we so complacent with our rights that we would allow a president to say he might kill Americans? But he will judge the circumstances, he will be the sole arbiter, he will be the sole decider, he will be the executioner in chief if he sees fit. Now, some would say he would never do this. Many people give the president the — you know, they give him consideration. They say he’s a good man. I’m not arguing he’s not. What I’m arguing is that the law is there and set in place for the day when angels don’t rule government."

I strongly suggest watching more of the speech here.  It's definitely worth spending at least a few minutes on.

This should terrify us.

We have a President who believes that he is judge and jury and holds the power of life and death over each of his citizens.  He is attempting to strip away our basic right to due process.  And we're supposed to be happy that he hasn't exercised that right "yet".

The gun control debate has raged these past months and I'll admit that I wince when I hear people say that they have a right to guns, given by this countries founders, so that they can hunt or engage in sport.  Your right to hunt or go out shooting at the range is not why our founders made sure those rights were embedded in the bedrock of this nation. 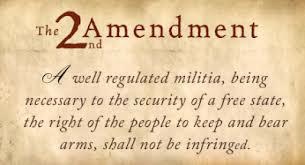 Our founding father's carefully placed those words, those rights, in their prominent position near the start of the bill of rights.  They knew the importance of an armed populace in protecting the basic rights of the people.  George Washington said “Firearms are second only to the Constitution in importance; they are the peoples' liberty's teeth.”

There is a reason that many in this country believe that you should have a right to own an assault weapon.  It isn't based on your right to go out shooting at the range.  It's based on the right, recognized by our founding father's, to protect ourselves from tyranny.  And no, a handful of bullets in a little gun isn't going to protect that right.  That is why the second amendment was written.

I pray that there is never a reason for the people of this country to exercise that right.  I pray that our President sees that shredding the constitution and ordering the deaths of his citizens based only on his own judgement, or on the advice of those around him, as exactly what it is: very, very wrong.

What worries me today is that he doesn't seem to see that.  He seems to think that we should be happy he hasn't exercised this supposed power, while apparently insisting that such a power exists.  I, like, many Americans, find that sort of power, held in the hands of one branch of government, and basically in the hands of one man, incredibly frightening.

Unfortunately, as Senator Rand Paul pointed out with his Lewis Carroll quote, it feels as if we've been plunged into the Rabbit Hole into a world where the constitution is only given lip service, and the executive branch has announced that they will play the roll of the Queen of Hearts...
Posted by Cammie Diane at 9:04 AM