Bishop of the Week: Bishop Morlino of Madison

"This gets back to the need for the new translation, and every point I’ve attempted to make. What we say and do at the Mass, and what we do before the Lord present in the tabernacle matters."
-Bishop Morlino of Madison 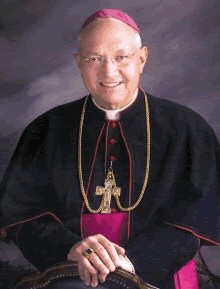 Life has been so busy that the "Bishop of the Week" section of my blog has been neglected for a while now, but when I began reading this letter by Bishop Morlino of the Diocese of Madison, I just had to make him this week's Bishop of the Week.

Bishop Morlino is reminding us of the importance of the Eucharist.  He writes:


Our people know well, the aspect of the Mass which is the Sacred banquet, but help them to know the Eucharist at the Memorial of Christ’s loving Sacrifice for them. Help them to understand your role in laying down your own life as the minister of Christ’s Body and Blood, present in the Host.

Christ offers Himself, whole and entire, Body, Blood, Soul and Divinity at every Mass to every woman and man who is prepared to receive Him. At the end of the day, our goal should be to help every, man, woman and child really to understand this, in a profound and life-changing way. If we recognized the gift that we already have, what an impact that would make upon us and upon the world! So, let us tell out this Good News!

Of course some people aren't thrilled with other parts of the letter, which include reminders about when Communion under both kinds was intended to be received.  He quotes Sacrosanctum Concilium saying:

When I read this I have to admit I was shocked.  I figured that the change that brought Communion under both kinds to the laity made it the norm for pretty much every Mass.  What was laid out was actually quite different from what happened however, and the reality really doesn't seem to match what was intended when Sacrosanctum Concilium was written.

I love reading Bisop Morlino's call to reverently approach the Eucharist.  It's incredibly sad that this is such a problem, but I think most of us can agree that it is undeniably so.


...As I’ve said, over and over again, and as you know well, this requires catechesis. So many do not understand the Eucharist as the memorial of Christ’s Sacrifice, his death and resurrection; nor the real presence of Christ, body, blood, soul, and divinity, under both species of bread and wine; nor the role of the ordinary and, if necessary, extraordinary ministers of the Eucharist. Most of all (and this has been my point from the start) so many of our people do not understand the kinds of reverence due at all times to the sacrament, whether within the Eucharistic Liturgy or outside the celebration...

It's a very powerful letter and I strongly suggest reading it!  Of course not everyone is thrilled with the Bishop's call to understand and respect Our Lord in the Eucharist.  This post by Father Z pretty much sums it up.

Let's pray for the good Bishop, and for Bishop's everywhere, as he calls us to undo the years of poor catechesis!

Photo from the Diocese Website
Posted by Cammie Diane at 7:11 AM

Email ThisBlogThis!Share to TwitterShare to FacebookShare to Pinterest
Labels: Bishop of the Week, Catholic Culture