It's Almost Over! Surgery! 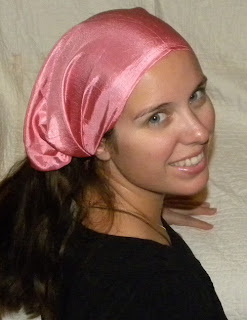 Today was the doctor's appointment.  The medicine had been pretty painless (that was a pleasant surprise!) and I had a feeling we were probably heading towards surgery since not much had happened (if you're queasy at the mention of bodily fluids, there will be light mentioning of said fluids, so you may want to turn back now).

The news I had for the doctor was this: the light spotting was picking up again and I had a jar of... "debris".... that was the product of the medicine doing a bit of what it was supposed to do.


Paul had class until mid-afternoon, and so I took the girls along with me, and headed to the doctor's office.  As I drove into the parking lot I remembered that the other doctor... the super doctor, Doctor H, had a second office in the same building as my new doctor, and I wondered if I might run into him.  In my head I imagined the scenario.  I would be indignant.  I would pull the bottle out of my purse and say:  "For your future patients, the next time a woman tells you something is really wrong and she's hemorrhaging, you might want to believe her, because this is not dysfunctional uterine bleeding."  I imagined myself bravely holding out the jar.

I unloaded the girls, asking Sadie why she'd taken her shoes off yet again, and put Mae in her stroller.  As I approached the large glass doors, the sun reflected off of them and I saw him standing, in the open elevator, with a rather smug smile on his face.  Dr. H.

By the time the doors opened and I saw that it wasn't actually Dr. H, but a life size decal of Dr. H, with his arms crossed in his white coat, with his name and gynecology embroidered on his pocket, plastered on the front of the elevator doors, I knew that I was far too cowardly to say anything had he been real.  I would likely have waited for the next elevator. 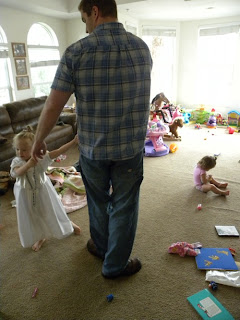 After hearing that the bleeding hadn't stopped, she (my new doctor) glanced at the "debris" (while Sadie loudly said: "It's the baby!", I wondered how she even associated what was in the jar with me being pregnant three months ago, and the doctor explained: "No Sweetie, that's not the baby.") and ordered a D&C.  Apparently the bleeding means that whatever is there, is still there, even after taking the misoprostal.  I'll find out tomorrow if she managed to convince the OR to fit me in on Thursday, or if we have to wait a bit longer.

I came home and cooked four meals for the next week, while Sadie and Mae held Paul hostage (it's amazing how differently they play with him when compared with how they play with me... they wrestle with me a little.  They go into bouncing-off-the-wall-giggling-hysterically-tackle-mode when he comes in the room).  The freezer's now full of meals, which always makes me feel better.  And from what I've heard the recovery from D&C's tends to be fairly easy.

I'm pretty excited about the surgery (is that odd?).  After a three month roller coaster ride, which involved around two and a half months of being pretty sick, the physical side of this might actually be coming to an end (I say might because I feel like I've thought "surely this is it" before and each time I've been wrong).  But really: surely this is it!
Posted by Cammie Diane at 8:21 PM