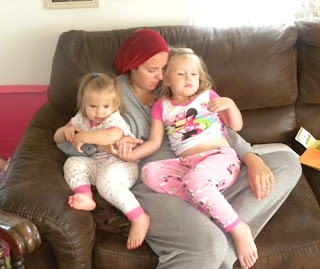 I'm praying to avoid another trip to the ER.  I'm not sure what my odds are at this point.  I guess they're probably better if I can lay perfectly still and not move, but in this house, that is... unlikely...

I was pretty uncomfortable all day yesterday, but I was also feeling pretty cheerful.  If you have a week stomach, the frequent warning to stop here is in effect from this point forward.  The estrogen seemed to work almost immediately and after two months of bleeding it had completely stopped.  I took it easy though.  The girls were both sick with a fever/cold, and I was wondering when the antibiotics would kick the infection and the pain would subside, but I felt better after reading that the antibiotics I was given are used to treat the bubonic plague and anthrax.  After all, if they can kill the bubonic plague, I'm sure they can take care of "inflammation."   We decided that the girls and I certainly had enough reason to miss Mass, and we laid around and watched princess movies for most of the day.

Sadie and I even unpacked her train set, which Nani and Grumpa gave her for her birthday, and I watched as she began to use it to take over the entire house (if you ever think about getting the Melissa and Doug train set just know that it is awesomely gigantic).  Dinner was in the oven and bedtime was only a couple of hours away when I carried Mae into the kitchen to fill her sippie cup and felt it start... enormous amounts of blood.  It was almost like my water breaking, but it wasn't amniotic fluid.  In trying to put it into a measurement, I would say cups and cups.  I called for Paul and gave him Mae and stumbled into the bathroom.  The bleeding lasted, on and off, for about three to five minutes.  The only way I can really give an amount to how much there was, is that I flushed the toilet twice as I was leaving the bathroom and the flushes couldn't handle that much blood.  Paul told me he flushed it twice more before it actually managed to drain everything out.  Needless to say it was a lot.

I was lightheaded and my hands felt numb as I lay back, thinking, we don't have insurance... and we don't know if our new insurance will pay the previous days trip, and I'm sure this is thousands and thousands of dollars.    Paul and I agreed that if the bleeding didn't stop, we would have to head to the ER.  I convinced him to wait to see.  And for now, as long as I'm laying down, it seems to have stopped.

So I'm relying heavily on Go Diego Go (because that's pretty much the only think that keeps Mae distracted... when Sadie puts on a princess DVD, Mae brings me a Diego DVD and will put it in my hand and start to whine) to get through the day.  And I'm praying that we have really reached a turning point.

Today we're going to the hospital where I miscarried to get the records, because there's a doctor about an hour away who wants to see them and who might see me.  And I'm just praying we turn a corner and really start to see an improvement, because this is all kind of crazy.  We found out that the baby had no heart beat two months ago yesterday. In terms of health I'm ready to put this behind us...
Posted by Cammie Diane at 7:55 AM