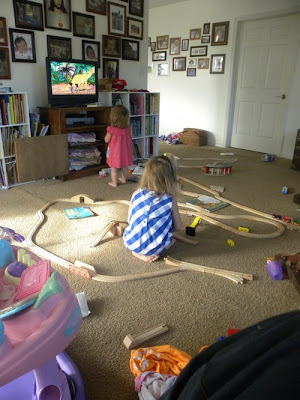 Yesterday I was really starting to worry in a "why-am-I-not-getting-better-am-I-going-to-die-if-I-don't-go-back-to-the-hospital" type of way.  And I almost went back...  However last night I really felt like I turned a corner (I think the antibiotics might have started working! and winning the battle against whatever is going on!) and this morning I feel much more like myself, although we definitely won't be trotting out of the house to go to our weekly story-time today.

I do kind of feel like I should send Melissa and Doug, the company that makes Sadie's train set, a thank you note.  Sadie received her train set for her birthday and loved playing with it before we moved.

When we got to Florida I kept trying to figure out a place for it, and until two days ago it was the only box that wasn't unpacked (Yay!  I can officially say that we are unpacked now!).  We opened it two nights ago and it has occupied both girls for the past two days.  They actually let me lay on the couch without both of them having to lay on top of me.  It was amazing.

Sadie even learned how to build a bridge by herself using the blocks to hold it up and was thrilled to show me that she could do it herself. 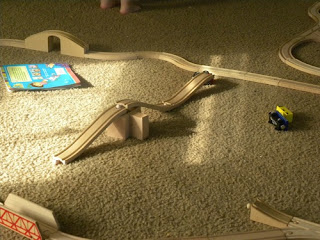 I'm so thankful for today and for not feeling like I need to crawl from room to room!  Yesterday everything felt so intense and horrible.  Today I feel kind of like I have the flu, which is much less intense.  Thank you to everyone for your prayers!

I have to say that the most frightening thought to me at the moment, is what would have happened if I hadn't gone to the hospital and been put on the antibiotics when I was.  I mean, if I got this sick on the antibiotics... I can't imagine what it would have been like without them.  I know that has been on Paul's mind too.

Now to take it easy and let the girls destroy the living room while we stay inside the house for at least one more day.  Hopefully they'll start feeling a bit more confident again (because while they let me rest they've also been watching me like little hawks as I go from room to room and both have been crying if they aren't in the room with me) and will relax!
Posted by Cammie Diane at 7:33 AM