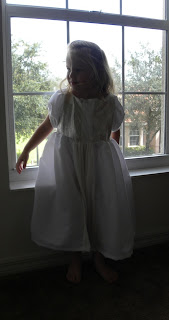 At Sadie's age, not being invited to a party, is usually not a big deal.  After all, its not like she goes to school where everyone is talking about it.  But today I wanted to put her in a little bubble and make all her cares go away, because a birthday party, complete with hats and cake and tons of kids, was directly outside our living room window, and apparently everyone else in the entire world was invited.

If I was up and about I would have taken the girls out to get ice cream or go to the park, or go anywhere other than here with the party right there, with Sadie wondering why she wasn't down there too.

And of course I'm doing a not great job at not being really super sad that Sadie's feeling... the way she's feeling... which is probably a result of just having surgery and being on peroacet, mixed with natural momma bear emotions.

And maybe it's because I feel a little bit guilty too.  Being sick for the last three months has meant that I haven't been able to go to every single event and activity, and it's meant I haven't been able to go down and sit with everyone else and socialize every night.  Being shy played into it too... Maybe if I wasn't shy I would have felt like going down and hanging out, but when you mix sick with shy a person often finds themselves feeling weary at the very idea of going down and mingling.

On a happy note, the surgery went well, and I think that this really is it.  So hopefully I will be a bit more able to go to events soon.  And maybe my socializing a little more will mean that Sadie doesn't find herself sitting in a window, watching everyone else have a blast at a birthday part, any time soon.
Posted by Cammie Diane at 5:43 PM