I started out being pretty excited that this whole thing was, hopefully, nearing an end, but tonight I'm pretty nervous (with the nervousness approaching all-out-panic at record speeds).  I guess I've developed a fairly pessimistic outlook on this whole thing, that stands at odds when compared with my normal personality.  I know where it's coming from though.

These past months, with regard to this whole medical situation, it seems like everything that could possibly go wrong, has.  I mean, I remember being twelve weeks pregnant a little over three months ago and thinking: "Yay!  I'm twelve weeks pregnant!  What are the chances of miscarriage now?  One percent!  I've made it!"  Followed by, what are the chances that the next sonograms would miss everything and that every doctor I talked to for months would think that nothing was wrong?  So when I find myself thinking, D&C's are safe and routine, the small pessimistic voice in my head, says, "everything else has gone wrong these past few months, who's to say this will be any different."  I mean, what are the chances that the hospital wouldn't do a D&C to begin with, at 14 weeks along?  Or that they wouldn't check to see that I'd passed everything before sending me on my merry way?  Or that the misoprostol would do a whole lot of nothing? 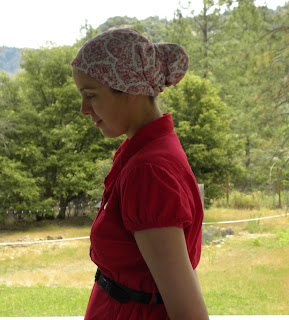 Those thoughts were followed by increasing panic at the pre-op when I read the paper that the paper work lady was filling out, upside down that said "Dilation and Suction Curettage and any other necessary surgery" and found myself thinking "any other necessary surgery!  They must think something else is wrong!" while the logical part of my brain says: "calm down... I'm sure it says that on every pre-op paper in case something goes wrong and the doctor needs to fix it."

So yeah.  I'm not feeling particularly logical tonight.  And apparently it's catching since Sadie asked me about my "ouchie" tonight and then when I explained that the doctor was going to fix the ouchie with surgery tomorrow announced that she was scared of Mommy's surgery...  I can't imagine where that's coming from...

And of course I feel guilty that Paul's missing classes tomorrow, which might seem silly... but in law school you really don't want to miss class at all... so... that's stressor #3431 at the moment.

I'd like to fast forward to the weekend and have this all be over with.  Any and all prayers are greatly appreciated.  I am so ready for it to be next week...
Posted by Cammie Diane at 7:54 PM