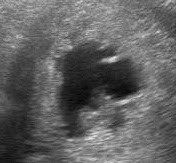 I'm home and I'm very thankful to be here!

I was starting to wonder if they were going to have to perform a D&C.

I haven't talked about it much on here lately, and if you're squeamish about woman-type problems (or blood loss) you may want to stop reading, but I've been experiencing some complications from my miscarriage.  The bleeding had gone on and on and on (it's been over two months since it began now) and I was still having positive pregnancy tests.  This morning (and really, if you're squeamish, stop right HERE!!!) there were blood clots that were four inches across.  I had serious back pain and dizziness and nausea.  And that's why we headed in to the hospital.

At the hospital the question of the day seemed to be:  "You were fourteen weeks along when you miscarried?" followed by "And they didn't do a D&C?!?!?!"  The fact that no tests or diagnostics were done after the miscarriage, seemed to be pretty big too.

They did blood work and an ultrasound and we waited for the other hospital to send my records over. I watched my blood pressure on the little monitor and thought: "wow, 92 over 45 is low, even for me..." After about six hours of waiting (during which time I read my Magnificat and A Mother's Rule of Life and knitted and sewed) the doctor came in and sat down and told me that my uterus was inflamed and that an OB had said that I needed estrogen to stop the bleeding and antibiotics for the inflammation and because my hormones are still completely out of whack from the miscarriage.

I frowned and asked if the estrogen was necessary and was informed that it was if I wanted to avoid a transfusion.  He assured me that this was very short term (21 days).  I was convinced that he was right and that it was a necessity.  Since estrogen pills (birth control pills) can cause an egg not to implant after it's been fertilized, which would result in an abortion, abstinence is the rule (in our case, which is something we'd discerned years ago while discussing hypothetical situations of this sort) while this is being sorted out.  I couldn't live with the idea of a baby being aborted, even if that wasn't my intent when taking the pill.

Then the doctor asked me to tell him more about what happened at the other hospital and I burst into tears.  He listened and told me that my story was going to stick with him for a long time and that he would share it with his students and would tell them that this was absolutely how not to treat a patient.  He also said that he was going to be having a talk with some of the doctor's he knew at the other hospital.

I'm hoping that this is a turning point and that I'll be able to start getting better now.  It's been a long couple of months...  Thank you all for your prayers and kind words.  They've meant so much to us this summer and fall!
Posted by Cammie Diane at 5:04 PM