The Roller Coaster Rolls On!

This post might jump around quite a bit, kind of like our day yesterday!  We're apparently still on something of a roller coaster health wise, with another... "incident" last night.  I was fine all day long, and got a lot of rest (you'll see Sadie basically running the house in the pictures below).  She was my big-girl helper.

She seems to be taking this whole, taking-over-while-Mommy-is-sick thing pretty seriously and when we were laying down for Mae to take a nap she said: "Are you feeling okay Mommy?"  I did end up having my Friday appointment bumped forward to tomorrow afternoon after said "incident," which involved a phone call to the ER.  So hopefully tomorrow we'll have some more answers.  I'm a little nervous that those answers might include surgery, although at this point, I'd enthusiastically say "yes" if it meant life was back to normal!

As I mentioned in my earlier post, Sadie cleaned the living room, carefully putting the toys back into the basket (which she's carrying in the picture below).  She wasn't thrilled when she put them away a second time, only to have Mae start throwing them around the room.  I intervened quickly to stop an all out argument... 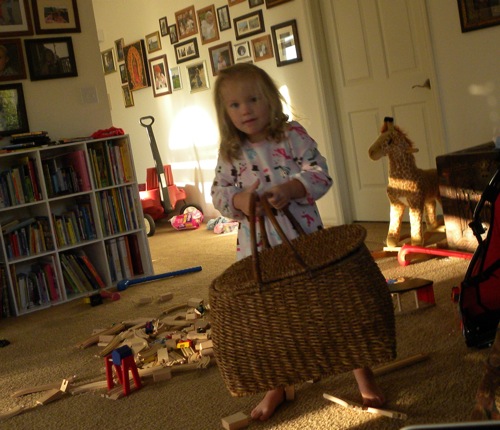 Mae 's eyes are glued to Tangled, while Mommy steals a kiss. 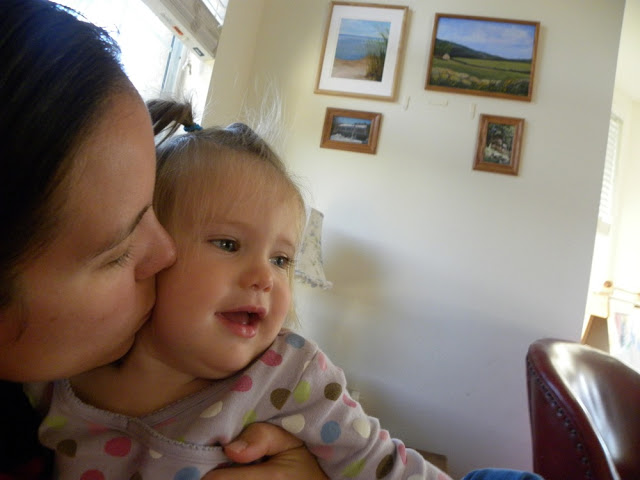 This looks like it could become a problem.  She barely manages to get out.  Disaster averted. 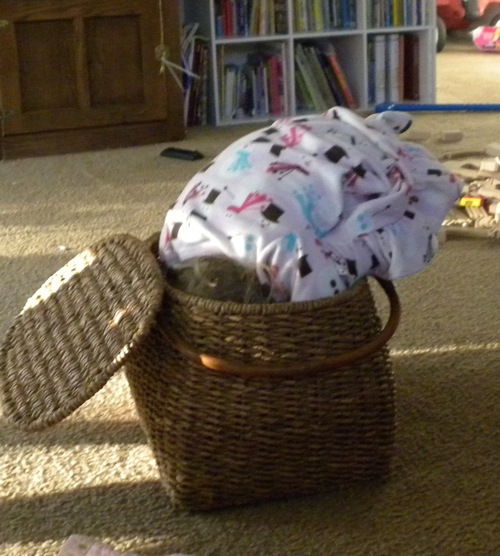 After a break playing in the basket, Sadie decided to "wash" the dishes.  It's a good thing that dish soup is practically free with coupons and sales.  Because I think she probably used half a bottle by the time she was done.

I really dislike seeing that particular pink Susan G. Komen logo on anything I've purchased.  I'm all for supporting the fight against breast cancer (or any disease) but I still don't understand how the Komen foundation donating $569k to Planned Parenthood in 2010 works into that plan.  It seems counterintuitive for a company who wants to fight breast cancer to donate to an organization that hands out pills like candy, that make women 5x more likely to develop breast cancer.  And that's without even bringing the slaughter of the unborn into the equation.  Maybe I should start my own yeast culture so I don't have to buy Fleischmann's. 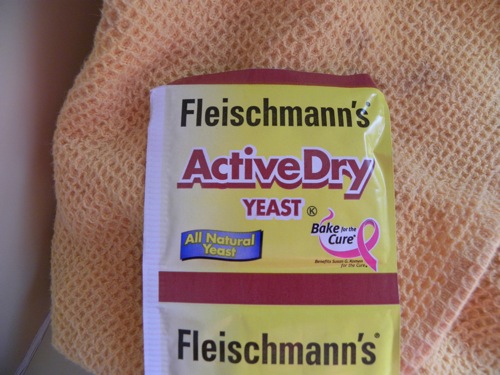 Sadie made my favorite lemon-lime soda sugar rolls.  I had to stop her from eating the batter a few times. 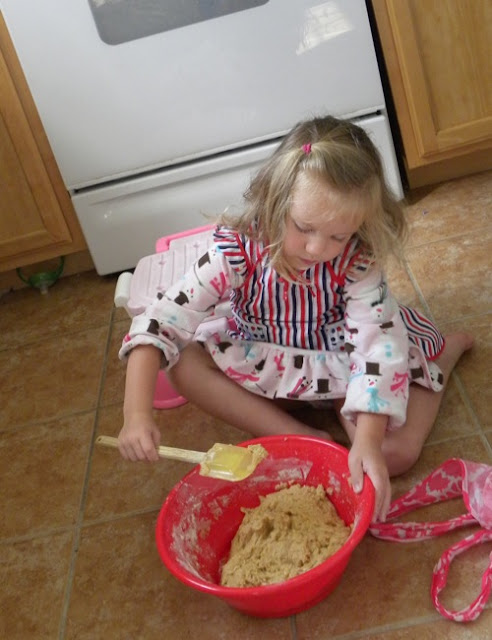 Kneeding the dough was her favorite part of baking.  Followed closely by repeatedly telling me to put the bread in the oven.  It was hard waiting for it to rise again and again. 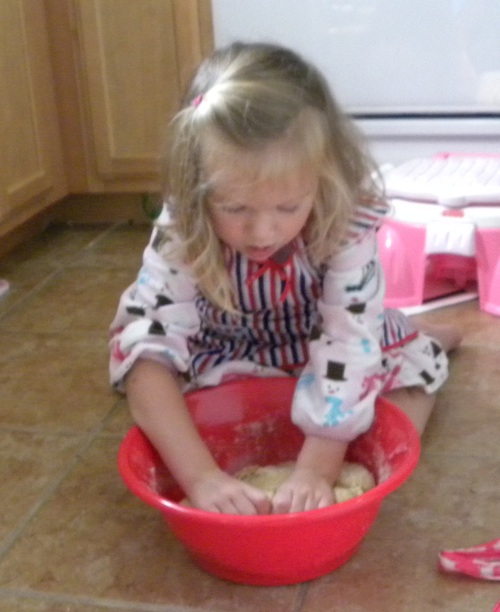 I was exceptionally excited to receive this in the mail.  Ours was completely covered in rust and since I grate almost daily it was becoming a problem.  I'm hoping this one doesn't rust (although the other grater's 5+ year run wasn't too disappointing). 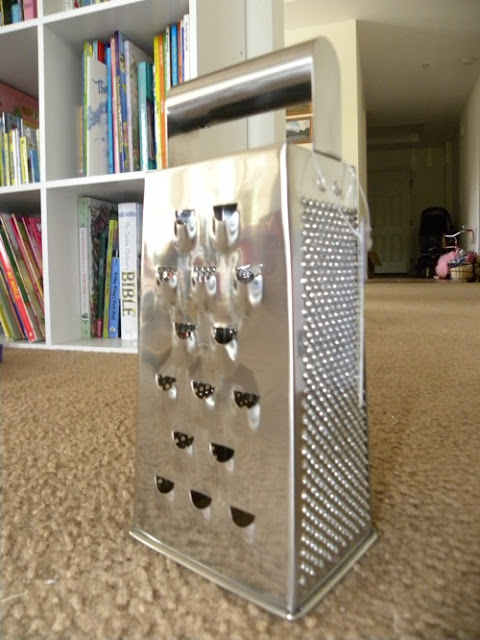 And then Mae Bae wandered into the kitchen.  We use the potty that no one uses as a step stool.  We bought it when potty training began, but ended up using one of those kid toilet seat which actually sit on the big toilet seat (way less work).  The girls drag the "step stool" around when they need to climb anything, but today Mae came in and renewed her "I'm old enough to use the potty" argument.  She sat like this with the train for about half an hour (and that is the train that Sadie brings her when she wants Mae to smile). 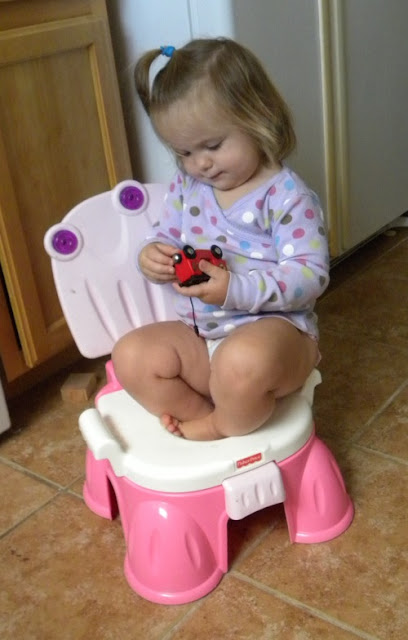 The stuffy nose is almost gone.  But I think she's pretty annoyed (with me?) in this picture... 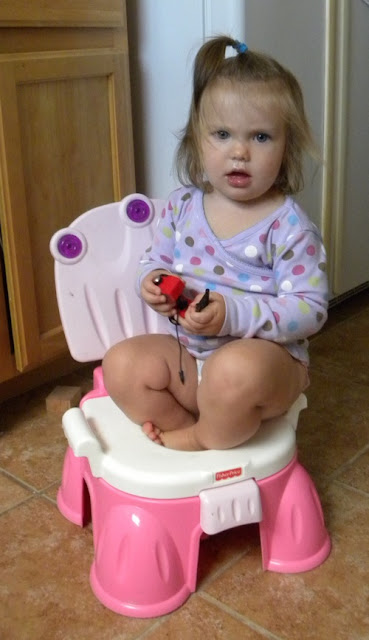 And then there was the latest princess dress.  I've actually added costumes/dresses to my Sadie's Saint shop if anyone is curious!  I can just see this one as an angel's costume with a pair of wings!  This dress is actually a little bit too big for Sadie at the moment.  I have a feeling that our home will be filled with my "test" princess dresses before too long. 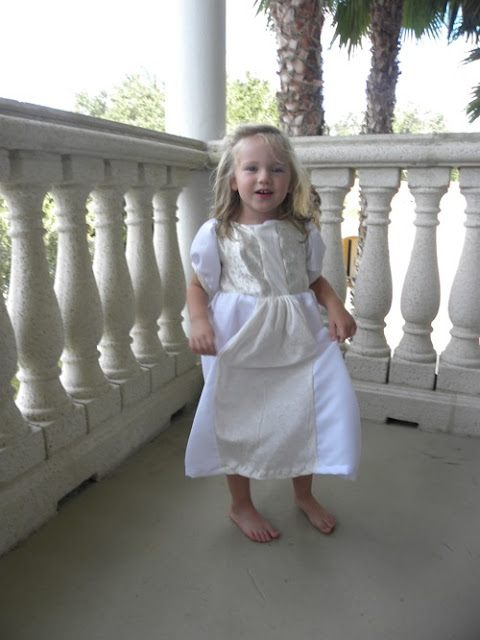 Here's to an uneventful day, and hopefully some answers at the doctor's office!
Posted by Cammie Diane at 6:00 AM