Making a Mountain Out of An... Overpass? 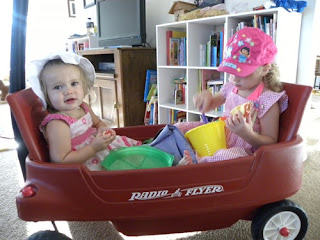 Yesterday I took the girls and walked to a park three miles from our house after Sadie began a campaign to convince me (after we'd begun walking to another park that's much closer to our home) that that particular park was the only park she wanted to go to.    As we walked she began her routine non-stop questions.

Now let me say, I have yet to see a mountain in Florida.  The area we live in is pretty much as flat as it can possibly be.  I kind of smile when I see roads with names that include words like "ridge" because I haven't seen anything even vaguely resembling a ridge here.

When I called the "mountain" a "hill" I was actually being kind of generous.  It's an overpass.  It feels like a hill when I'm towing 90 lbs on a bike (the combined weight of the girls and the trailer) or when I'm pushing them in the stroller but in the car it's hardly noticeable.  When I told Paul this very story and mentioned the hill he looked confused because if you haven't walked up it, it's very easy to miss the slight elevation change.

Sadie, on the other hand, has dubbed it a mountain.  Today in the car we went down the same road and Paul got to see Sadie's enthusiastic reaction as she began shouting:  "The mountain!  I see the mountain!" yet again.

Sadie's really going to be shocked when we finally get to visit California and she gets to see real mountains again.
Posted by Cammie Diane at 11:17 PM