Enough Hours in the Day... 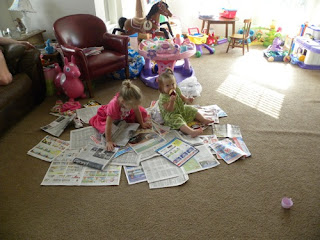 Do you ever feel like there just aren’t enough hours in the day?

I’ve kind of felt like a juggler lately, trying to keep all the balls in the air and trying to make sure that none of them touch the ground.  When I spend the night sewing snoods I feel a little guilty when I don’t get around to making a rosary or a chaplet, and a few more recent projects I’ve been working on have taken away from my store-work time altogether.  I’ve been making Mae cloth all-in-one diapers, because diapers are just so expensive and I suddenly understand why all-in-ones seem so expensive when you buy them, because they take serious time to make (at least they do for me).

The pressure is on to start seriously couponing again, because consistently living on the combined income of Paul’s permitted 10 hours of work a week and my store sales isn’t easy, and I can tell that Paul isn’t thrilled when he asks what’s for dinner and I say “rice and beans,” or some variation of rice and beans, yet again (and he doesn’t seem to be deceived when I say “five bean chili!” enthusiastically, as if it doesn’t involve one of those two staples of our diet).  Couponing should help with that, and I did finish organizing my coupon binder tonight.  Nearly every coupon in this house is clipped and in a carefully labeled section.  I’m ready to start saving again. 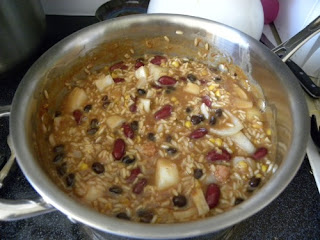 Then there’re the basic portions of my vocation that take up the majority of the day: caring for my family, cooking, cleaning and making sure nothing disastrous happens is a full time job (Mae’s a climber and I’m finding that silence means that she’s moved a chair, climbed something and is perched somewhere).  I’ve been developing a schedule of sorts, and attempting to incorporate the liturgical year into it as well, but I still feel, rather frequently, like I’m playing catch-up every night, especially with Paul spending around 50 hours a week working on school.

Even my blog has suffered as I’ve found myself getting around to writing a blog post at around 11:00 at night, and after getting up at 6am, I’m not too sharp by the time I start typing away.

I’ve also started writing again, even if it’s just a little bit every night.  I’m not sure I’ve ever mentioned this here, but I’ve actually completed two novels… one of which is all edited and printed out and sitting on a shelf back in California just waiting to be sent out, after being trimmed from over 100,000 words to something a little less gigantic.  Paul’s pointed out that my perfectionism could mean that nothing I write will ever see the light of day, but my blog should be proof that that’s not entirely true.  Baby steps!

For now I’m re-reading Holly Pierlot’s A Mother’s Rule of Life and I already feel a little better about coming up with a Rule and getting things under control so, at the very least, I find things a little less stressful.  I had read half of the book when Sadie was small, but it got put aside at some point and I just kept meaning to finish it.  Now is definitely the time. 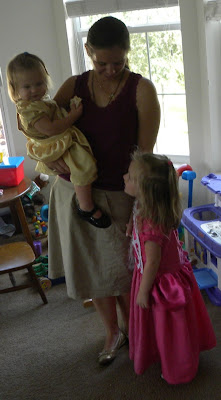 The girls and I are also starting to do morning, evening and nightly prayers together and Sadie actually went and got her Bible tonight when I was looking for my copy of Magnificat and demanded that we read it (which is something we usually do before bed, although I haven’t been as great about remembering a it these last couple of weeks).

And while things can seem a little hectic at times (usually in a “it’s all just going to be messy tomorrow so why am I cleaning tonight” sort of way) I like the business of day to day life and I sometimes think that I can almost feel my vocation and the call to serve my family, drawing me closer to God.  Tired or not I feel overwhelmingly comforted by the knowledge that I am where I’m supposed to be and there’s no where else I’d rather be and nothing else I’d rather be doing.

I’ll just have to keep reminding myself that sitting down for fifteen minutes doesn’t constitute “sloth, “even if there are dirty dishes still in the sink.  Everybody needs to take a little break.  Even moms.

Has anyone else tried writing out a “Rule of Life?”  How do you stay organized?  Do you feel like you get everything done by the end of the day?

Now for an end to my day!  It’s a little earlier tonight than usual, but I can barely keep my eyes open!
Posted by Cammie Diane at 10:59 PM

Email ThisBlogThis!Share to TwitterShare to FacebookShare to Pinterest
Labels: The Rule, Time Management